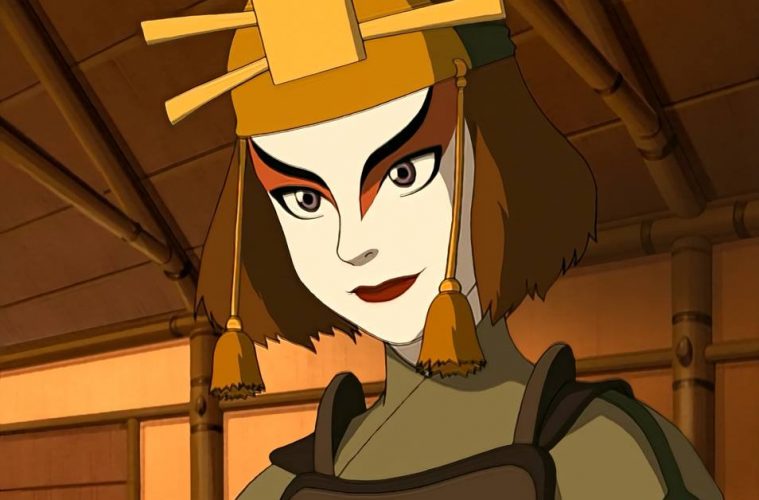 “I Am a Warrior… But I’m a Girl, Too”: Suki and the Kyoshi Warriors of ‘Avatar: The Last Airbender’

This year marks the 10th anniversary of (arguably) the greatest animated series of all time. Avatar: The Last Airbender, created by Michael Dante DiMartino and Bryan Konietzko, ran on Nickelodeon from 2003 to 2008. The show tells the story of a young airbender named Aang, the Avatar who gathers friends and skills over the course of the three seasons, in his quest to defeat the Fire Lord and restore balance to the world. One of the greatest aspects of the show, beyond the incredible world-building, high-quality voice acting, and animation, is the many diverse and fully realized characters. The bending – as characters literally re-shape the environment around them with fighting/dance moves drawn from traditional martial arts – is so impossibly cool, but it is the many complex characters, particularly female ones, that truly make Avatar one of my favourites.

Avatar is a show that shines because both male and female characters are allowed to embrace the full spectrum of emotions. Both boys and girls fight, cry, and express their feelings. Characters perform their genders in a variety of ways, from the soft-hearted Aang; to Smellerbee, a female freedom fighter who declares, “As long as I am confident with who I am, it doesn’t matter what other people think,” when she’s misgendered. A recent re-watch reminded me just how badass Toph is, and Katara’s development as a waterbender is one of the many character arcs the show skillfully develops; from Katara accidently bending Sokka’s feet to the ground, to becoming a waterbending master. Zuko’s complex growth from outcast prince who’s tortured by thoughts of honour and acceptance, to a member of the Avatar’s inner circle, is as essential to the series as Aang’s own quest to defeat Fire Lord Ozai. This is a series that desperately deserves to be studied. Resisting the temptation to offer in-depth analyses of all its major characters was one of the hardest parts of writing this think piece.

Yet, while every character is worthy of study, I am intensely interested in the non-bending characters. When we are first introduced to the world of Avatar, it is a world that has been at war for almost a century, with the powerful Fire nation attacking the other three nations. In a bid to destroy the Avatar, an entire race of people called the Air Nomads are slaughtered. In the South Pole, we learn that the vibrant waterbending culture has been destroyed by the violent removal and imprisonment of all Southern Water Tribe benders, with the exception of Katara, saved by her mother’s sacrifice. In a world at war, where warriors can literally “bend” the forces of nature, characters that cannot bend – but still fight and hold their ground against those that can – are particularly commendable. Despite facing an enemy erupting with blazing, consuming fire, they still arm themselves with knives, swords, and fans, and fight.

And it is this that brings us to my favourite character in this much-loved show, a latecomer to Team Avatar (and the only member of the Gaang to not appear beyond the opening credits in the follow-up series, The Legend of Korra, but we won’t get into Korra here). Suki (voiced by Jennie Kwan) is first introduced early in the first season, when Sokka, Katara, and Aang visit Kyoshi Island, and are captured by the Kyoshi Warriors. As an elite band of female fighters, the Kyoshi Warriors are significant for a variety of reasons. They’re historically all female, with few exceptions, protecting and serving the people of Kyoshi Island. Throughout Avatar, despite the prominence of major female characters, it is still clear that a patriarchal system is in place. Katara discovers that only male waterbenders are taught to fight in the Northern Water Tribe, while women are taught to heal. No female soldiers are seen on-screen among members of the elite earthbending police force, the Dai Li. And no female masters appear in the Order of the White Lotus. Only Fire Nation armies appear to include female soldiers and guards, bending or otherwise. The Kyoshi Warriors, as a group of apparently non-bending female warriors (we never see any of them bending, though they trace their roots to Avatar Kyoshi), are doubly revolutionary in the Avatar world.

Suki is clearly presented as the leader of her village’s band of Kyoshi Warriors, with later episodes showing her actively taking on a leadership role in a fight. According to a Tumblr archive of the now-defunct, official Avatar encyclopedia website, Suki began her training at the age of eight. As the eldest of the village warriors (though she is just a teenager herself), Suki is responsible for training the younger women, and can be seen leading the others through a training exercise when Sokka interrupts them.

This early in the first season, Sokka is still expressing the tenets of the patriarchy that he’s internalized, and is blatantly sexist, muttering, “I can’t believe I got beat up by a bunch of girls,” before crashing their training. After Suki easily beats him, despite his claims to be the “best warrior in [his] whole village,” Sokka eventually swallows his pride, offers an apology, and asks her to train him.

Suki agrees, but insists that he follow all their traditions, including wearing their uniform and face paint. When Sokka complains, claiming that the uniform feels “girly,” Suki explains the significance of the Kyoshi uniform: “It’s a warrior’s uniform. You should be proud. The silk threads symbolize the brave blood that flows through our veins. The golden insignia represents the honour of the warrior’s heart.” According to the Avatar encyclopedia, the traditional uniforms are inspired by Kabuki theatre, and the face paint is designed to intimidate opponents, while also drawing inspiration from traditional Japanese Geisha style. The fighting technique of the Kyoshi Warriors is uniquely suited for women who might be facing larger opponents, and is not about strength, as Suki informs Sokka, “but using your opponent’s force against them.”

Like Suki herself, the uniform of the Kyoshi Warrior defies simplistic categorizations. The women fight with a fan (inspired by Tessenjutsu, or ‘iron fan technique,’ the Japanese martial art), an object that carries decidedly feminine connotations for Western viewers, while also serving here as a powerful weapon. The face paint, a means of intimidating opponents, carries similarly feminine associations. Characters within the diegesis draw attention to this duality. When Aang sees Sokka in his Kyoshi uniform, loaded with symbols of honour and bravery, he calls, “Hey Sokka, nice dress!”

At the end of the episode, when Team Avatar is forced to run from Zuko, Sokka pulls Suki aside and apologizes: “I treated you like a girl, when I should have treated you like a warrior.” Suki replies, “I am a warrior” – leaning in to kiss him on the cheek – “but I’m a girl, too.” With these notable lines, Suki declares that she is a girl and a warrior, and both are inseparable, essential parts of her identity. She also makes it clear to Sokka that she is not different from other girls, and that she is not an anomaly. Girls who fight are still girls, and Suki can be fierce, powerful, and still kiss the boy. While many of the female characters in Avatar defy simplistic definitions and neat categorizations, with this line, Suki literally declares her complexity as a young woman – an important reminder to Sokka and to viewers.

Although Suki was originally planned as a one-time character, she was so popular with fans and staff that she was eventually made an official member of Team Avatar, allowing her relationship with Sokka to grow. As two warriors in leadership positions, both are shown to be protective of each other. Faced with the treacherous Serpent’s Pass in the second season, Sokka attempts to dissuade Suki from coming because he’s concerned for her safety, spending the entire trip chastising her to be more careful. At the end of the trip, Suki admits that she only came to ensure he got across safely. As two of the older members of Team Avatar, Sokka and Suki are often visible in their affections for each other, equally initiating their embraces. Their desire grows increasingly explicit, though tempered by the constraints of children’s television. At one point, Zuko blunders an obviously romantic tryst, stopping Suki before she can reach Sokka’s tent. Zuko finds Sokka inside lounging on his bedroll, surrounded by flowers and candles, a rose between his teeth. Suki clearly has a soft spot for Sokka – her sarcasm, confidence, and pragmatism a match for his humour and wild schemes. She affectionately puts up with his bad jokes and earnest attempts at declarations of affection, such as a sand sculpture of her, which Aang describes as a “blubbering blob monster.”

Yet, even as she emerges in her role as Sokka’s love interest, Suki continues to appear as a multifaceted character – a warrior and a young woman. Significant examples of this can be found in the third season, particularly during the two-part episode depicting Sokka and Zuko’s attempts to break Suki and Sokka’s father, Hakoda, out of a high-security Fire nation prison. When Sokka first comes to Suki’s cell dressed as a guard and attempts to kiss her, she throws him against the wall. Once his identity is revealed, Suki runs into his arms with tears in her eyes. “I’m so glad to see you Sokka […] I knew you would come,” she says, and they kiss. Yet, despite Sokka’s plans, it’s ultimately Suki’s initiative and skill that enable them to put his ideas into action. In a gravity-defying moment reminiscent of the aerial martial arts in films like Crouching Tiger, Hidden Dragon, Suki runs across the heads of the rioting prisoners, racing up the wall, easily taking down the firebending guards before capturing the warden. The scene is a vivid display of Suki’s acrobatic and fighting abilities, followed by the arrival of Sokka and the other characters, who are struggling to catch their breath. A panting Hakoda declares, “That’s some girl,” to which Sokka dreamily replies, “Tell me about it.” Beyond Suki, this episode also highlights the fighting prowess of other non-bending characters against benders, with both Ty Lee and Mai standing against firebenders and the powerful Fire nation princess, Azula.

While they originally may have simply been intended as a means of knocking some sense into Sokka’s heavy-handed sexism, Suki and the Kyoshi Warriors quickly develop into something much more. Suki’s arrival into a predominantly-bending Team Avatar helps emphasize the importance and incredible abilities of non-bending warriors. In the final episode, she singlehandedly takes control of an airship, and saves Toph and Sokka. Her connection with Sokka stands as an exemplary romantic relationship of mutual affection and respect. This is partly because of the way the show handles Sokka’s character growth. While Suki helps push Sokka into reorienting his world view, they only truly become a couple after he has had time to develop as a human being. Avatar does not that suggest Suki should be responsible for making her boyfriend a better person. The Kyoshi Warriors also inserted an important element of female empowerment into an otherwise largely male-dominated, martial landscape of Avatar, while defying simplistic classifications, existing as both women and warriors. Although Suki may not be the first character that people think of in regards to Avatar, she will always be my favorite.