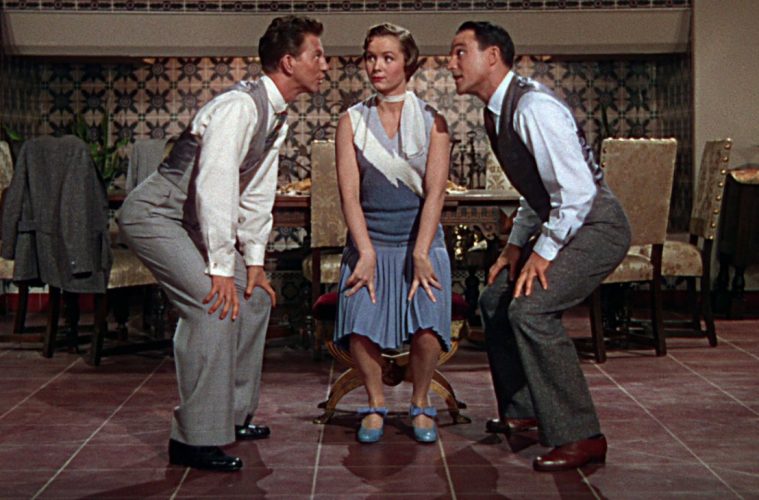 I grew up in The Middle of Nowhere, Oklahoma in the early 2000s, where summers would reach the top temperatures, winters could result in multiple snow days, and spring afternoons were plagued with treacherous thunderstorms. Streaming sites were non-existent and Blockbuster was a luxury used only for special events, but my mom – being the thrifty and efficient parent that she still is – would drive me to the best public library in the county each week to prepare for whatever unfortunate weather could occur. Each person with a library card was allowed to check out five VHS tapes. In the beginning, my mom picked out all the titles in hope of expanding my cinematic knowledge to include some classics. Knowing my outspoken six-year-old self a little too well, I’m sure the first few weeks of my mother’s choices came with groans of disgust at the old black-and-white and sing-songy movies with dead Hollywood stars. But that all changed with Singin’ in the Rain. At that early age, I never expected to passionately fall for a film my parent picked out and ultimately find an escape in its technicolor dream world like I did. This love affair that started decades ago is still very alive and well.

Truly, I cannot complain about my childhood. I never had to worry about the essential needs of survival like food or clothes, or deal with anything tragic. (At least that I can remember.) But some family events occurred during my infancy and resulted in a very sensitive emotional state that has been a struggle throughout the years. I cannot recall any actual memories from this known family trauma, but the longing for acceptance from friends, peers, and family members, along with the later bouts of depression, are something I am still dealing with on an everyday basis. “Why am I like this?” I remember asking myself at a very young age. “How do I run away from all this rejection I feel?” Okay, I’m sure it was not that articulate and existential in my young brain, but it was something similar. Movies were always a way to cope and escape from reality, but it wasn’t until I discovered the joy left behind after a viewing of Stanley Donen and Gene Kelly’s musical collaboration that I knew true acceptance was possible, no matter life’s circumstances. (That, and can we just talk about how gorgeous Gene Kelly’s smile is? Who wouldn’t feel better after seeing that?)

In the beginning, Gene’s character, Don Lockwood, tells the cheering crowd at a premiere of his new movie how easy his life had been to this point, while the reality of his struggles and failures play in flashback sequences during his voiceover. My use of musical escapism is similar to the fibs Mr. Lockwood tells into his microphone because of the optimistic perspective that results from the cheery colors and rhythmic dancing. Each personal screening of the film on our old living room television would erase whatever was currently causing me a bit of sadness. How could I remember some rude comment a bully said the day before when Donald O’Connor as Cosmo Brown is ‘making me laugh’ by doing backflips? What was the point of dwelling on the rejection I felt from my sister when all three stars –including the adorable, young Debbie Reynolds – danced in the wee hours of the morning because they figured out a way to save a horrible new talkie? The colors, the melodrama, the jokes, the entire character of Lina Lamont, all came together to feel like a beautiful escape or break from reality that was only made harder by my personal struggles as a sensitive little girl.

Though I used musical escapism to forget my youthful problems, Singin’ in the Rain also planted a hope that one day I would rise above and succeed. The big dance number that includes Gene showing up in New York City as a nerdy young talent who just ‘gotta dance’ and ends up being the star of Broadway is the classic underdog story. It uses dance as narrative and fantastic visuals that continue to grab and wrap around me when I watch this film today, which I still do consistently. This scene could be the origin of my longing to move to the good ol’ NYC and make my dreams come true, or at least added to the dream that became a reality a couple of years ago when I moved to Midtown Manhattan.

Eventually, my mom insisted that I stop picking Singin’ in the Rain on our weekly trips so that I could find other films to fancy just as much. I watched other musicals that I still look at with fondness, but soon enough, I discovered An American in Paris. Yet again, Gene Kelly’s smile, along with the vivid colors and graceful dance scenes, came together to reach out to a young, broken girl through the television screen and hug me. Maybe that’s where my dream of moving to Paris came from. The greatest gift these films gave me was a love for cinema’s ability to help you escape from reality and extract emotions that cannot be expressed without the beautiful art form that is film. Singin’ in the Rain gave me movies.