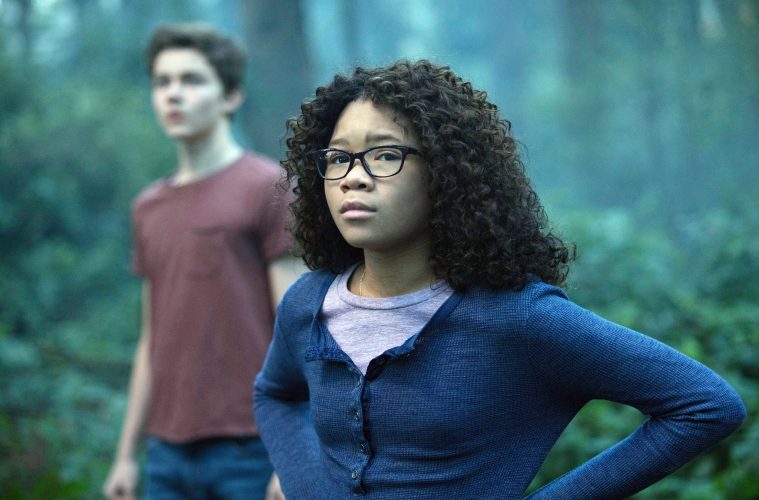 Review: Warriors of Love in ‘A Wrinkle in Time’

Ava DuVernay’s new film, A Wrinkle in Time, opens with Meg Murry lying awake in her attic bedroom, listening to a storm raging outside. An adaptation of Madeleine L’Engle’s celebrated children’s novel of the same name, it captures the irresistible first line of the book, “It was a dark and stormy night.” This opening immediately establishes the careful balancing act of the film, as it works to adapt an unruly and complicated source text. While the film may stumble at times, DuVernay’s changes – like casting Storm Reid, a young Black actress, to play Meg – play a powerful role in making the 1962 novel relevant and resonant for a new generation.

A Wrinkle in Time is the story of Meg Murry, her younger brother Charles Wallace, and her friend/crush Calvin. With the help of three mystical beings, they venture to the farthest reaches of the galaxy to save Meg’s father, who has been imprisoned by a dark force, the IT. Yet before this fantastic adventure can begin, we are given an essential glimpse into Meg’s daily life.

Mr. Murry’s unexplained disappearance four years earlier has hit Meg hard. She is struggling at school, stubborn, suspicious, and angry with the world around her. And much of this is justified. Beyond the simple reality of life in middle school, we see her bullied ruthlessly by other girls (no one can bully so effectively as young women), and listen with Charles Wallace as two teachers gossip about the missing Mr. Murry, who they speculate has run away with another woman. Although she finds Charles’s genius somewhat embarrassing at school, she lashes out at those who make fun of him. As Meg tells the principal after being called in for attacking a bully, life doesn’t make sense without her father.

After opening with Meg’s daily life on earth, the film rushes us forward into a dazzling world of colour, magic, and science. But even as A Wrinkle in Time plunges into the fantastic, it continues to offer quietly commanding moments that reveal Meg’s deep insecurities. In between the spectacle of saving her father and the universe, these revealing, human moments form some of the strongest elements of the film. Meg is incredibly insecure about her natural hair, and shuts down her white crush Calvin’s repeated compliments. As DuVernay noted in an interview with Vulture, Meg’s struggle with her self-image is a reality for many Black women: “Hair is a big deal for black women…There’s the European standard of beauty that we’re all exposed to and bombarded with that says, My hair needs to look like a Caucasian woman’s hair: straight.” Meg refuses to believe Calvin could actually like her hair because she has internalized messages that she does not have the “right” type of hair or perform the “right” type of beauty.

Unlike for Calvin and Charles Wallace, tessering (a method of travel through the fifth dimension by ‘wrinkling’ time), is painful and difficult for Meg. After one particularly painful tesser, she confronts Mrs. Which (Oprah Winfrey), demanding to know why it is so hard for her. Mrs. Which responds that her struggles to tesser come from within, caused by her unwillingness to return to herself, to her own body. Meg, insecure and awash in an awareness of her own faults, seizes upon this, asking if it is, in fact, possible to reform as somebody else. She would much rather be somebody else, anybody other than Meg Murry.

While there is an evil to be ‘defeated’ – the IT, which has captured Mr. Murry and later Charles Wallace – the IT is not the real villain that Meg must overcome. The true struggle of the film is not between supernatural beings, but between Meg and her insecurities. In the pivotal confrontation scene – a scene another film might assign to twenty minutes of fast-paced CGI fighting – Meg confronts Charles and IT with her love. Charles Wallace, under the control of IT, attacks her physically and verbally, pounding Meg with harsh expressions of her every doubt and insecurity. IT offers to remake Meg in a new image, conjuring up the popular girl she could be. This popular Meg oozes self-confidence, strutting around in cool clothing and notably straightened hair. In an act of radical, powerful love, Meg refuses this perfect girl and accepts her faults. She finds strength in her anger and in her stubbornness. Meg turns to IT and Charles Wallace, and declares that she is worthy of affection: “And you should love me because I deserve to be loved!”

This scene is not simply a breathtaking moment of strength for Meg. While Charles Wallace is Meg’s biological brother in the book, he is reimagined in the film as Meg’s adopted brother. He becomes part of the family as a baby, shortly before Mr. Murry’s disappearance. With this change, the film offers another profound way in which to examine anxieties around love and acceptance. When Mr. Murry starts to tesser in a desperate attempt to save Meg and Calvin from IT, Meg screams that he cannot leave Charles Wallace again. Her refusal to abandon her baby brother is so strong that she is left behind. When Meg confronts Charles Wallace under IT’s control, he informs Meg that Mr. Murry is her father, not his. In this, we get a glimpse of Charles Wallace’s own fears – that the father he barely knows will not accept or love him. Meg shouts her love at Charles, reminding him that he is part of the family, and it is this love that saves him from IT.

After the confrontation, the two children collapse together, exhausted. Meg softly sings a lullaby to her brother, “Flower of the universe / And child of mine.” This song, a new Sade single written for the film, conjures up an earlier moment when Mrs. Murry sings to the infant Charles Wallace cradled in her arms. The song, a beautiful theme for a film that triumphs love, with lines like “This love is far and wide / When you smile the stars align,” is a powerful promise that Charles is loved.

The film concludes with Meg successfully tessering by herself, her eyes open wide to take in the fabric of the universe. She loves herself, and with this love, she can unlock a power formerly beyond her reach. She arrives home to witness her parents’ teary reunion. Watching her parents’ love, she is given a promise of future love herself with Calvin. Meg’s relationship with Calvin is another area in which the film shines. Calvin, like a male character in a Studio Ghibli film, is incredibly supportive of the main female protagonist. Racing from a giant whirlwind, he trusts her to use her extensive knowledge of physics to calculate their trajectory and shoot them up to safety. Before complimenting her on her hair, he praises her for her intelligence. He thinks she is amazing, and does not hesitate to remind her.

In 1962, A Wrinkle in Time was ground-breaking in part because it was a science fiction book that focused on a female protagonist. Today, the film performs another ground-breaking act: Featuring a smart, young, woman of colour surrounded by a diverse cast, with Ava DuVernay as the first Black female director with a nine-digit budget at the helm. While the film has not been embraced by many critics, this is a film to love despite its faults – to love for its faults. A Wrinkle in Time offers a rare story of sincere love, a radical act in an age of sarcasm. In the end, what matters are the viewers taking in this film with wide eyes, watching breathlessly as this universe unfolds.

A Wrinkle in Time is a chance for young women, particularly those of colour, to see a reflection of themselves and their anxieties on the big screen, and to see a hero who emerges because of their “faults.” One need only look to social media to see the ripples of love emanating from and for this film. A Wrinkle in Time will surely have an immeasurable impact on the lives and confidence of some young viewers, the way only the media you consume as a child can have. A Wrinkle in Time is a film full of wonder and heart. It stands as a radical, powerful act of love that you will not forget.