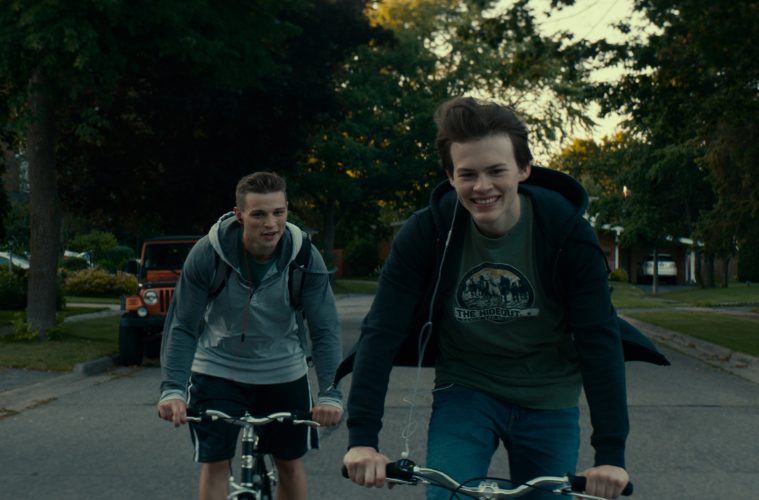 Review: ‘Giant Little Ones’ Considers the Contradictions of Coming-of-Age with Tenderness

Last year, along with many critics, I was troubled by the camera’s evasion of queer sex in Luca Guadagnino’s erotic coming-of-age drama, Call Me By Your Name (2017). This spring, in Keith Behrman’s Giant Little Ones (2018), a similar formal conceit occurs: a hookup between two teenage boys takes place completely under the covers in the dark. Rather than show the mess of this encounter and the engaged bodies of its participants, we are given audio—rustling and moaning—beneath the visual of a moving bedspread. As quickly as the scene begins, one of the teenagers bolts from bed, grabs his shoes, and runs out the door. The scene is fast, awkward, and confusing. Is this evasive of showing sex itself? No, not really. Behrman’s film, and this scene in particular, shows an awareness of the ways in which teenage sexual experience is dishonestly depicted: choreographed or imbued with misplaced eroticism by way of unrealistic stylishness. Giant Little Ones is not a film about a secret, steamy affair between teenagers, who, despite being in the process of discovering their sexuality, maneuver covert meetings that look like they’ve been having sex for years. Instead, Behrman has crafted a refreshing cinematic story: late-teenage sexuality without the glamour.

The film is contemporarily set in the suburbs of Sault Ste. Marie, Ontario. When not at school or socializing in their community, the film’s teenagers live in clean houses with granite countertops, widescreen televisions, big garages, turquoise swimming pools, and other upper-middle class markers of generic interior design. In this setting, Giant Little Ones becomes backgrounded by a political dimension that extends beyond the “love without labels” hashtag that has been a cornerstone of its digital marketing. While the refusal to clamp down on sexual categories is part of the film’s originality, Giant Little Ones is at its best in the ways it works to partially unravel present-day ambiguities around LGBTQ+ acceptance and the superficiality that often underscores the thorny politics of ‘tolerance.’ Equally important to Giant Little Ones is how these values might shape experiences of being different in North American suburban communities. The on-screen community in Giant Little Ones is ruled by a NIMBY (Not in My Back Yard) perspective, where being gay or queer is theoretically acceptable, but from considerable distance. In framing the film as so, Behrman asks critical questions about transgression: How do tolerant friends behave when we become too different, too threatening for them to tolerate? In exploring the answer to this, Giant Little Ones reveals that tolerance can also function as a mask for uglier feelings of homophobia and anger.

Behrman’s feature tells the story of seventeen-year-old Franky (Josh Wiggins), for whom life is pretty easy: He’s an athlete on the swim team and multiple girls have crushes on him, including Priscilla (Hailey Kittle), with whom he enjoys couch-side kisses after school. Franky seems hesitant to push things further sexually, something that his best and oldest friend, Ballas (Darren Mann), has no qualms about. Ballas hyperbolically brags about having sex with his girlfriend as he and Franky bike to swim practise in the mornings. In their jubilant familiarity with one another, we are given the sense that they’ve been doing this their whole lives, which have socioeconomically afforded them the equivalent ease of gliding around a corner on a spring day.

Late adolescence, however, introduces Franky and Ballas to the complexities of identity formation and self-assertion. Franky is troubled that his relationship might lack meaning: “She doesn’t have anything to say,” he laments to Ballas. In bed at night, Franky juggles his iPod earbud while Priscilla becomes absorbed in animal videos, wishing he could escape elsewhere. On his seventeenth birthday, Franky’s plans to lose his virginity to Priscilla are thwarted. Instead, he and Ballas end up drunkenly hooking up. Things end badly: Ballas bolts and becomes cold, unwilling to confront the shame and guilt of whatever lasting or emergent desires were unlocked by this sexual experience. When the news breaks at school, Ballas claims that the experience was one-sided and Franky is quickly ostracized.

Complicating matters is that Franky’s father (Kyle MacLachlan) left his mother (Maria Bello) for another man, a situation that has left Franky with a lot of unresolved anger that his mother doesn’t discourage. It isn’t until Franky becomes aggressively cold-shouldered at school that he is forced to be around his father more frequently, much to Franky’s initial anger and resentment. In this new position as social pariah, Franky also reconnects with Ballas’s sister, Tasha (Taylor Hickson), who is also bullied and grappling with high school in the wake of significant trauma. Franky desires Tasha and it is quickly clear that they have their own emotional history as they redefine their friendship.

While Giant Little Ones sidesteps labels, it does not forsake the real painful experiences of its gay, lesbian, bisexual, or queer characters when they are forced to confront the violence of compulsory heterosexuality. Early on, for instance, we’re shown that neither this high school or community is a safe place for gay/questioning kids or their parents. Swim team member Michael (Carson MacCormac) is constantly bullied in the locker room by Connor (Evan Marsh) for being gay. The poolside changing room becomes the site of division, where Michael is given an earlier changing time to ensure his safety. The rest of the team is given the option to change earlier with Michael or change later. “I don’t like this divisiveness,” their coach says as a half-hearted intervention, but doesn’t intervene when none of the boys choose to change with Michael. Later in the film, Franky’s father exposes the contradictory politics embedded in this non-solution that may ensure Michael’s physical safety at school, but doesn’t penalize the homophobic behaviour at the root of the problem.

It’s similar for the adults: Franky’s dad has been pushed out from the social network he found community in when he was married to Franky’s mother, Carly. Franky emulates the status quo by pushing his father away. At the dinner table, Carly remarks that she was under the impression that it’s socially acceptable to experiment but this attempt at support is grasping, loaded by her complex experience with Franky’s father. The dinner conversation devolves into her shouting that their father wasn’t gay when she married him.

Queer life in Sault Ste. Marie has been previously captured in Canadian cinema in the form of Roy Mitchell’s documentary, I Know A Place (1999). When Giant Little Ones premiered at TIFF, conversations about the uniqueness of filming in Sault Ste. Marie evoked a sense of intimacy amongst the cast. This place-bound uniqueness, however, is sometimes lost in the film itself. Frequently, the setting comes across as a generic, could-be-anywhere North American suburb. I was often left yearning for more site specificity to deepen the film’s attention to the ways that place powerfully intersects with identity formation. Similarly, dialogue sometimes teetered towards theatricality and landed as one mark removed from capturing teenage vernacular.

None of this really matters, because what Giant Little Ones does best is illustrate the complex networks of feeling that simmer under the surface, which sometimes come to a head but more frequently do not. This conceptual thrust of who and what becomes submerged is beautifully complemented by the film’s attention to swimming as a motif. Important moments take place under the covers, behind buildings, as side conversations in the science lab, or in parking lots. When Franky is given a flare gun for his birthday, he casts it out of his pocket and shoots its ball of blazing fuchsia into the night sky. It’s a powerful image that moves beyond aesthetic prettiness and characterizes the pinpointed intensity that comes out of moments in which we feel our own autonomy taking shape.

When queer storylines puncture the mainstream, they often tempt critics to place them alongside one another comparatively, creating the false implication that LGBTQ+ cinema can be considered a coherent ‘genre.’ Giant Little Ones reminds us of the expansiveness offered by LGBTQ+ cinema that is often widened by smaller films, which refuse the suggestion that coming of age or coming into one’s sexuality can be framed through generalizing assumptions. By keeping it specific, Giant Little Ones does right by queer audiences: It evades universalizing claims to its story while still facilitating connection. Equally important to its success is that Giant Little Ones also does right by young audiences by providing dramatically interesting storylines about sexual identity compared to those generally directed at young audiences, where everybody looks over twenty or already embodies a near preternatural wisdom. Take, for instance, the cardboard romances in television programs like Riverdale or the tonal erraticism of 13 Reasons Why. Giant Little Ones is certainly sentimental, but it is never condescending.

One of the best scenes in the film occurs between Franky and his friend, Mouse (Niamh Wilson), who embraces the un-fixedness of their gender expression and sexuality, often encouraging Franky to do the same. Packing a newly purchased strap-on, Mouse asks Franky to feel the dildo for its hardness and realness. This bit quickly evolves into Mouse asking to see and then touch Franky’s dick. It’s silly and consensual. In a landscape of films about teenagers where every action and event is presented as deeply formative and imbued with hyperbolic significance, Giant Little Ones balances out those conversations and experiences that tectonically shift one’s life with those moments that may not, but texture our experience all the same. Through its unique approach to coming of age and embedded political nuance, Giant Little Ones shows that in spaces tightly ruled by heteronormativity, queerness is a powerful and constantly moving undercurrent.