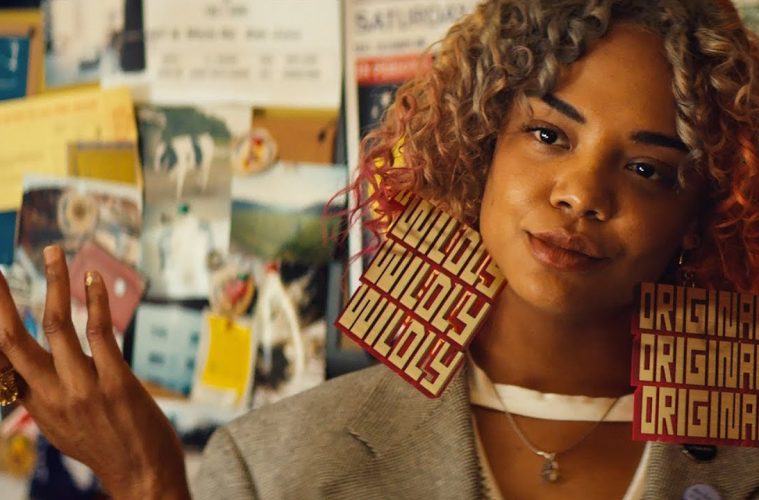 Review: ‘Sorry to Bother You’ is a Clever Send-Up of Race and Capitalism in America – With a Slapdash Ending

It’s a tall order for a film to be at once funny and sobering, doomsday and optimistic, slapstick at heart and thoughtful in execution. It’s no stretch to say that Boots Riley’s buzzy new directorial debut, Sorry to Bother You, attempts to scale the Mount Everest of cinematic feats. And lo and behold, it succeeds – mostly.

Lakeith Stanfield, with his characteristic slouch and devastatingly expressive gaze, stars as Cassius Green (say it out loud – ha-ha, get it?), aka Cash, a freshly-hired telemarketer in a fictionalized version of Oakland, California. At first, the gig is slow and Cash struggles to pay his bills, even the rent on the garage he shares with girlfriend, Detroit (Tessa Thompson, modeling some of the best statement jewelry ever seen onscreen). But everything changes when fellow telemarketer Langston (Danny Glover) teaches Cash to tap into his “white voice”; his success rate skyrockets, and he quickly climbs the ranks of the company hierarchy. Caught between forming a union with his coworkers and raking in big-time money, Cash suddenly finds himself wading into some ethically murky waters. Enter a thinly veiled labor camp-cum-prison complex called WorryFree, where families are given food and housing in exchange for a lifetime of work, and chaos ensues.

Sorry’s brand of humor is uproarious, but as with all good comedy, it also hits a nerve. As any non-white person can tell you, “white voice” is a very real thing, and it comes in handy for everything from ordering at a restaurant to convincing someone at a networking event that wow, it is such a coincidence, but your family also summers on Nantucket! There’s even a book on how Barack Obama mastered a more nuanced version of “white voice” known as “code-switching,” using it to his advantage throughout his presidential campaign and time in office. Not all of the ideas in Sorry are new or original (there are echoes of 2006’s Idiocracy and last year’s Okja), but the delivery is so shrewd, and the punches land so quickly, that they might as well be.

In a more serious vein, Sorry is also a meditation on protest, power, and the dangers of an insatiable appetite for increased economic productivity. The commodification and trivialization of dissent is lampooned by the memes that emerge from a demonstration at Cash’s workplace. A video clip of Cash getting hit over the head with a soda can goes viral, and before long, there’s a wig being peddled with Cash’s curls and a felt can attached. The film is peppered with surrealist elements, but is grounded by authentic, well-rounded characters; most are neither heroes nor pariahs, but something in between. We are given a glimpse into their struggles via both firsthand and mediated accounts (TV broadcasts, smartphone videos, etc.), without exploiting their plight or cheapening their experiences. Refreshingly, poverty is not treated as a stain on one’s existence, but as as a symptom of a flawed system ripe for upheaval. As the eccentric renegade to Cash’s freewheeling philosopher, Detroit even wears her financial status like a badge of honor. She is happy to twirl signs for a living and DIY her own wardrobe if these small compromises allow her to abstain from contributing to an oppressive system. Yet she’s also far from passive – in her spare time, she dons a mask to tag WorryFree billboards with graffiti, and she creates African-themed art to remind the world that America was built on slave labor and pillaged resources. Beneath her laid-back demeanor, Detroit knows that political apathy, despite its ubiquity and apparent innocuousness, can be much more nefarious than outright evil. The same sentiment, wrapped in a punkish, aesthetically vibrant outer shell, forms the backbone of the film.

Sorry serves as a kind of Marxism 101 for the Snapchat generation, which, if it sounds like an outlandish paradox, it absolutely is. The film’s greatest strength, as with Black Mirror, is toeing the line between the absurd and the painfully realistic. The story it presents is enough of a tall tale as to be entertaining, but stoic enough as to reflect some very real anxieties. One of the most memorable scenes in the film, but also one of the most uncomfortable to watch, involves a scramble to come up with a freestyle rap that goes horrifyingly wrong. A newly-promoted Cash has just been invited to a party hosted by Steve Lift (Armie Hammer), the smarmy, morally bankrupt CEO of WorryFree. Surrounded by a room of (overwhelmingly white) sycophants, Lift jokingly asks Cash to tell stories about the “Oakland gang stuff” he gets up to, as if inquiring about a casual pastime. When Cash fails to offer up any illicit tales, Lift suggests he rap for them instead, in a cringe-worthy but sadly believable twist on the humiliating rite of black performativity. Over a staid beat, Cash’s attempts to rhyme his own name with “smash” prompts only bored stares. Desperate to impress, he spits out a string of N-words, and only then does he elicit a reaction from the crowd, who begin repeating his impromptu lyrics back to him with grotesque delight.

Much has been made – somewhat myopically – of the parallels between Sorry to Bother You and Jordan Peele’s Get Out, and not just because Stanfield plays a crucial role in both films. The two share a spirit of measured subversion, impeccable tonal control, and early awards buzz for each first-time director. Where the films differ is in the effectiveness of their respective endings. Get Out ends in (spoiler!) the good guy getting rescued by his best friend, while leaving the bad guy – or gal, in this case – to bleed to death. In a society where real-life injustice awaits so many black men, Peele understood that cutting his protagonist a break was the catharsis his audience needed, though its well-documented alternate ending would’ve made just as much sense. Riley, it must be said, fails to conclude his narrative in any substantive way.

Without giving away the plot, I’d argue that the final twist in the film is played for cheap laughs and shock value. The fate that befalls Cash is such a disappointingly blunt hit to the head that a toddler would be hard-pressed to find the subtlety in it all. It’s frustrating to watch, as if a Michelin-starred chef is on the precipice of creating a revolutionary new dish, only to scrap a key ingredient at the last minute. The ending offers neither a satisfying conclusion nor, more realistically, a way forward for its supporting characters, who are still straddled with many of the same problems they began with, yet are somehow content with laying down their weapons and resuming the status quo. And while it’s tempting to read the situation as an allegory – that greed produces a vicious cycle in which there are no winners, only survivors; or that change often feels like one step forward, two steps back – I fear this would be giving the haphazard ending too much credit. In a film so chock-full of brilliant social commentary, it’s a shame the last act can’t follow through on its beautifully bold premise.