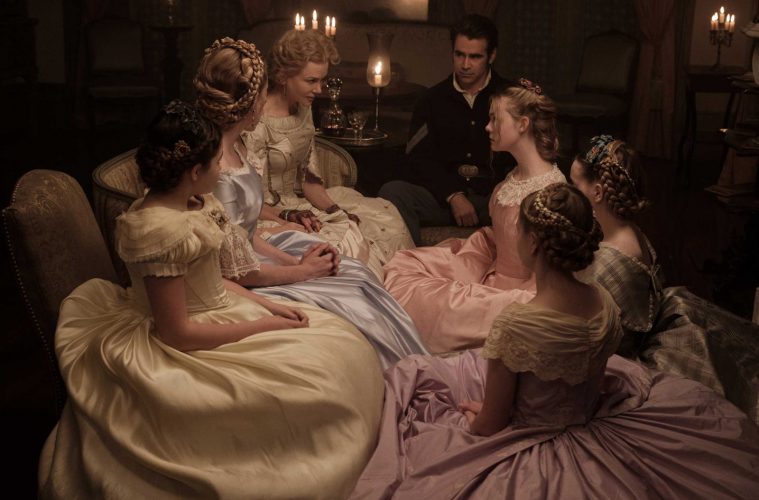 Review: ‘The Beguiled’ is a Beautiful Yet Loaded Story About Privilege

There is something phenomenal about a good title card and the way it makes you feel at the beginning of a film. One of my very first film professors walked us through the significance of the opening credits of Pedro Almodóvar’s All About My Mother (1999), and talked about how the text, colour, and movement indicated so much in so little time. Since then, I’ve always loved reading into title cards and how they are used to introduce an audience to a movie. In the case of Sofia Coppola’s most recent film The Beguiled, the simplicity of the pink cursive text – splayed across the screen as a young girl walks down the middle of a road – made me sit back and think, “This is going to be a good movie”. The elegance of the curling letters and the bold bright pink against the pastoral picture nods to the film’s femininity, while speaking to the abrasiveness of what being a woman means in the context of the film. The acting and mise-en-scène once again prove Coppola’s skill as a storyteller, leading to her win the award for Best Director at the 2017 Cannes Film Festival.

The Beguiled is a film that takes place in a Confederate school for girls amid the American Civil War. Things get complicated when an injured Union mercenary named John McBurney is discovered and brought to the house. From there, we see how the women in the house vie for his attention, and how he receives, manipulates, and encourages theirs. The film is an adaptation of A Painted Devil, a novel by Thomas P. Cullinan, which was first adapted for the screen in the 1970s. Coppola takes the name of the film and subverts it, creating something from the perspective of the ladies of the school instead of the Union soldier. By illustrating the nuances of the relationships of everyone in the house, The Beguiled is a film that exposes people’s needs and wants, and how “civil” society can be warped to achieve those needs and wants.

Both as individuals and as an ensemble, the cast shines. The small number of actors allows Coppola to really spend time with them, even the younger ones. Oona Laurence, who plays Amy, has a calculating innocence that works perfectly with Colin Farrell’s manipulative friendliness. Nicole Kidman gives a spine-tingling performance as the school’s headmistress Miss Martha, balancing her own desire and the well-being of the women under her care in delicate opposition. We can see this in the scene when Miss Martha tells Miss Farnsworth (played by Kirsten Dunst) to draw her shawl over her shoulders because her dress is too revealing. By shaming Miss Farnsworth, Miss Martha is hurtful while also seeming proper in accordance with the era, and there are many instances like this one. The tension that permeates throughout the film is tangible, and reasonable considering that the characters are trapped in a house together with no way out. At times, the film feels like a game of society chess, and everyone is manipulating everyone.

Coppola continues with gilded cages, a motif present throughout her films (I highly recommend this video essay on the subject). Her exposition of women trapped in their high towers attempts to comment on the complexities of white womanhood, as critics have discussed in depth here and here. In a world as chaotic as the South during the Civil War, the house serves as an unyielding symbol of the order and culture of the past, caging the women in the film. Every frame looks like a Renaissance painting, with each character positioned perfectly, and the way in which they go about their lives is passive but purposeful. The gaze is another important theme in the film. Laura Mulvey’s famous essay “Visual Pleasure and Narrative Cinema” talks about how film exploits women’s bodies for the male gaze. While that sometimes is the case in the film, the female gaze largely takes centre stage, and we see how toxic it can be when introduced into an environment of sexual repression and seclusion. Coppola’s use of the general notion of looking also plays into the delicateness of the film. There are long shots of the cast that make the audience feel as though they aren’t supposed to be watching. The gaze of the camera is not aggressive, but rather passive, similar to the way that the women look at and treat John McBurney.

In sum, The Beguiled is beautiful, but deceptively so. Its technical elements are executed in such a way that matches the carefulness of its narrative, illustrating Coppola’s prowess as a director. There’s an element of safety in the film, however; Coppola plays with what she knows and uses a narrative about white upper-class women to expose the ugliness and desperation of the human condition. Thinking back on the title card, the bright pink, cursive text echoes the film’s unapologetic nods to femininity and elegance, while still being bold and demonstrative of the struggles of the women in the film. The Beguiled is utterly feminine in its creation and exposition, but that doesn’t mean it should be underestimated.