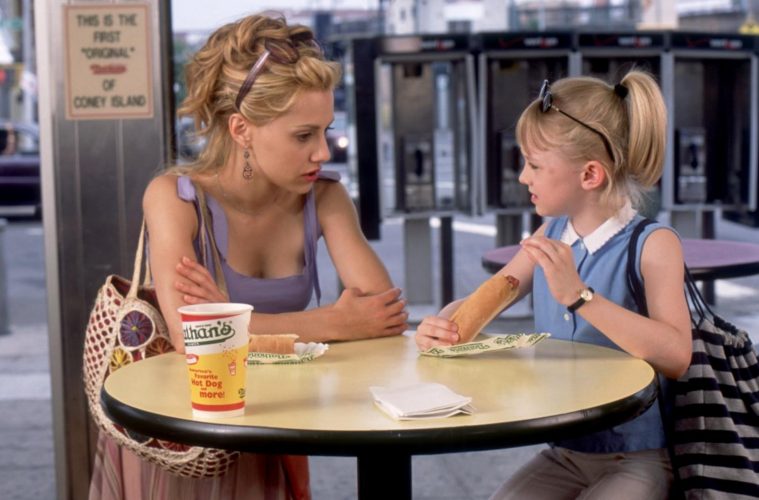 Personally, my favourite part of Boaz Yakin’s 2003 film Uptown Girls is that Billy Joel never plays. I’m joking, really. This film was tremendously important to me throughout my adolescence. It tells the story of two girls, 23-year-old Molly and 8-year-old Ray; the former the daughter of a deceased rock star with a pet pig, and the latter the daughter of a record label CEO who loves ballet. The importance and magic of Uptown Girls is in the special relationship between the two protagonists: an unlikely duo of girls who save each other.

From the film’s inception, Molly is framed as a princess. As a young girl, her parents passed away and she inherited their fortune. She is now 22, lives on the Upper East Side of Manhattan in a beautiful apartment, never works, and houses her father’s extensive guitar collection. The film begins with her, late to her 22nd birthday party, which has been planned by her two closest friends, Huey and Ingrid. When she shows up, she first meets up-and-coming musician Neal. Huey works for a record label and is trying to get Neal signed. On the night in question, however, he is also supervising his boss’s daughter Ray. Mature beyond her age, Ray is responsible to a fault. She brings her own soap with her, is terrified of dirt and germs, and is frequently convinced she’s ill.

Despite Huey’s pleading and Ingrid’s caution, Molly takes Neal home and time seems to stop. After several days, she sits in her bathtub and begs Ingrid to help her get rid of him. But when she emerges from the bathroom and he wants to leave, she consequently changes her tune (I’m guessing she’s a Cancer).

His departure sends Molly into a spiral. She lies in bed sobbing, all the while not noticing that her electricity has been cut off. Ingrid (definitely an earth sign) accompanies Molly to a lawyer, who informs them that “Bob” – the man who deals with Molly’s parents’ money – has taken off with her $10 million. So, for the first time in her life, Molly is forced to get a job.

Fortunately, Huey has a hookup. Ray and her mother Roma fired three nannies in the last month, so the position is available. At first, the arrangement seems advantageous to Molly; a place for her pet pig to stay, easy money, and very little work. From their first day together, however, Molly and Ray bicker like sisters. Ray criticizes Molly for not doing dishes properly and Molly criticizes Ray for not being more easygoing. When Molly tries to leave, Ray informs her that she can’t leave until Ray says so. Molly responds by clarifying that she works for Ray’s mother and not for her. Ray snaps back that Roma isn’t around and that she won’t be around, so really, Molly works for Ray. In my mind, this is the moment when Molly first feels empathy for Ray. As a result, she tries her best to bond with her.

Molly becomes emotionally vulnerable with Ray from that point forward. She explains the story of her parents’ death to an unsympathetic Ray. As the film carries on, we discover that not only is Ray’s mother not around, but her father is also in a soon-to-be fatal coma. But Molly’s vulnerability doesn’t go unreciprocated. One afternoon, when Molly arrives to pick Ray up from school, she discovers Ray engaged in a fight. Molly reprimands Ray and tells her there’s never ever a reason to hit another person; a sentiment she quickly retracts when Ray tells her someone called Molly a “slutbag whore”.

I would suggest that these two girls are heroes to one another. Ray imparts wisdom on Molly as much as the reverse. Ray doesn’t depend on anyone because of her absent parental figures. She tells Molly one day, “Other people always let you down. Why don’t you forget about them and do something for yourself?”. When Neal comes crawling back to suck more inspiration out of Molly, she turns him down. Molly chooses herself instead. 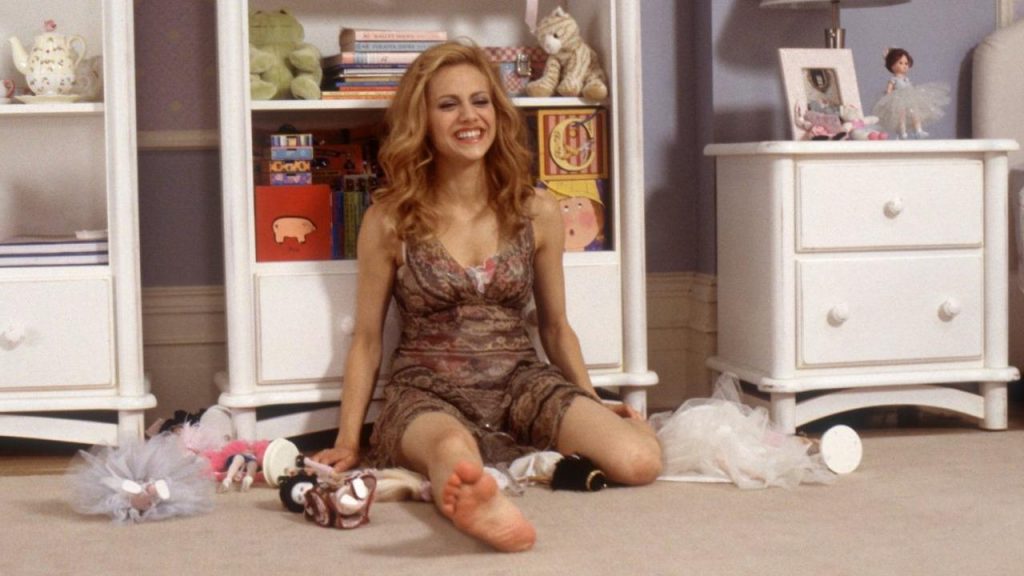 Molly wants Ray to depend on her. On her night off, she encounters Roma at the club. Frantically, Molly asks her who is at Ray’s ballet recital, to which Roma responds that Molly shouldn’t worry because there’s a car arranged to pick Ray up. The next day, on her day off, Molly takes Ray to Coney Island. Molly pokes fun at Ray for having never been to an amusement park. A very stubborn Ray won’t admit that she’s excited. Like a kind of exposure therapy, Molly makes Ray try a hot dog, which Ray has never eaten due to fear of illness and disease. Unfortunately, Coney Island is a ghost town. Ray pulls down her sunglasses to hide her disappointment, a tactic she frequently employs.

Once again, Molly recounts to Ray the story of her parents’ death. This time, however, Molly includes her shame. She tells Ray that when her parents died, she was angry with them. They were going on tour for the first time without her. Ray, a true pseudo-cynic, tells Molly that she was lucky she was mad because when you’re mad you don’t miss people. This encounter makes their relationship more intimate than ever and truly solidifies their bond. Molly tells Ray that after her parents died, she packed her bag and headed to Coney Island. Under the impression that it was a real island, she was surprised to find spinning teacups upon her arrival. She tells Ray that she kept “spinning round and round and round and the ride won’t stop”, and she has felt like that ever since. Molly tells Ray, “You’re right Ray… I am scared, but you’re scared too”.

This encounter strikes a change in Ray. After Molly and Ray fall asleep that night, Ray tiptoes out of her room and into her father’s room. After Molly semi-dramatically jumps into a Central Park pond and catches a cold, she goes to Ray, who tenderly nurses her back to health. Ray becomes more trusting with Molly. Molly tells Ray about a television show that alleged that comatose patients who were frequently spoken to by their loved ones lived longer than ones who weren’t. Ray trusts Molly and invites her to come with her as she speaks to her father. And Ray isn’t the only one who changes. Molly starts referring to Beethoven and Mozart and Chopin. She makes a tutu for Ray to wear. She becomes more and more practical, at the end of film even quoting Ray verbatim: “Fundamentals are the building blocks of fun”.

Ray’s father passes away quickly thereafter and, stricken with grief (although she would never admit it), Ray returns into her shell. Shortly afterwards, Roma fires Molly. Molly, however, will not let it happen so easily. Roma becomes defensive, telling Molly “I don’t know what’s going on between you and my daughter but she’s made it clear she never wants to see you again”. Hearing this, Molly tells Roma that Ray “must be going out of her mind with grief”. Roma doesn’t agree. She tells Molly that Ray is taking her father’s death very well. This sends Molly angrily into her best dialogue of the film, “Do you know what étage your daughter’s at in ballet, Mrs. Schleine? Or that she was banned from her science class for stealing a formaldehyde pig so that she could give it a proper burial in Central Park? […] You’re right. You don’t know what goes on between me and Ray because you don’t know very much about your own daughter”.

Days later, Roma calls Molly asking if she knows where Ray is. Ray never came home from school. In an amazing match on action, the camera spins from Molly standing on the street to Ray in a spinning teacup. Molly joins Ray in the teacup and there is a shot-reverse-shot wherein both characters stare directly into the camera. They spin and spin until Ray has to vomit in a trashcan. Ray starts to hit Molly in frustration. She lets her frustration out until it turns to tears. Molly holds Ray.

By the film’s end, these girls have saved each other. There is nothing more pure than the love between girls and the care that manifests from it. To be heroic isn’t necessarily to be physically strong, lifting cars or saving kittens. Sometimes being heroic can mean being emotionally vulnerable and intimate. The bond that Molly and Ray share is one built upon mutual respect, admiration, vulnerability, and most importantly, reciprocal care. Molly is a hero to Ray and Ray is a hero to Molly.