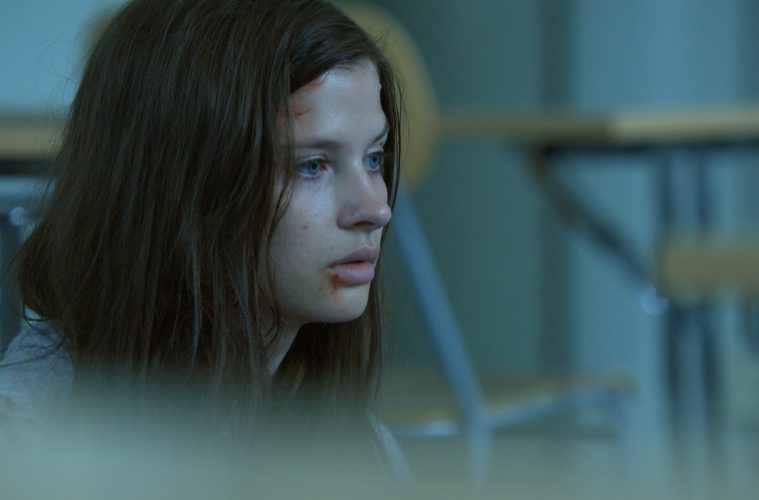 Review: ‘Quicksand’ Looks for the Truth Behind Acts of Desperation

I can’t get enough of foreign productions and all that they have to offer. Their wealth of storytelling, innovation, and boundless creativity make them a goldmine for audiences. My most recent binge, Quicksand, is Sweden’s first Netflix original series, released in April. Broken down into six episodes, the series pushes boundaries and isn’t scared to portray society’s realest wounds.

Based on the novel of the same name by Malin Persson Giolito, Quicksand starts off as a whirlwind romance between girl-next-door Maja and the rich new kid, Sebastian. Appearances only last so long, and things quickly take a deep dive into the dark and twisty. In a split timeline, the past explores the downfall of Maja and Sebastian’s relationship leading up to a school shooting. In the present, we follow the legal proceedings of Maja’s prosecution after being found alone at the crime scene. Covered in blood that is not her own, she is admittedly one of the shooters.

What I appreciate most about the choice to slowly reveal bits of the present as we explore the past is how the showrunners do not use the split merely for shock value. Instead, the jumps between time are used cleverly to enhance the viewer’s connection to Maja as a character. We are made to feel for her in a deep, confusing, and personal way as we see her impacted by the realities of her actions, which are juxtaposed with the unknowing innocence of her life prior to the events that uproot her world.

At first, Maya’s budding romance with Sebastian is thrilling for her. She never expected that someone like him—gorgeous, rich, affluent, someone who could have anyone he wanted—would want her. Sebastian is wild and outgoing, and his riches offer Maja a whole new world of yachting, party-going and reckless abandon. From the outside, their relationship appears to be perfect, like they were meant to find each other and live out the fantasy of first true love. Behind closed doors, Sebastian’s demons—propelled by abuse from his father and emotional distress, which he drowns with drugs and alcohol—take a toll on the dynamic of their relationship. Instead of pure teen romance, they find themselves in an inescapable, co-dependent entanglement that eats away at them both.

Sebastian holds a dominating and toxic emotional pull over Maja, keeping her caught up in a relationship that is quickly going south. His behaviour initially deters her, and she finds herself falling out of love with him and into the arms of one of her classmates. However, things are never as easy as we hope, and Maja’s life is once again turned around by Sebastian and his actions. The tug of war between mind, body, and heart pulls Maja in every direction. Her loved ones begin to pick up on personality changes and odd behaviour that she is exhibiting. They realize the toxicity of Sebastian’s presence in Maja’s life, and wish to steer her back on track, before it’s too late.

In trial, Maja’s character is picked apart; her actions criticized and her words manipulated. She fights to clarify her actions, all while struggling to fully understand them herself. Beyond the glass that separates Maja from the viewing public, she locks eyes with her parents, distressed and torn by the unraveling truth of their daughter’s life.

Prior to the school shooting, Sebastian and Maja isolate themselves. Sebastian hides away in his mansion, Maja always there with him, or doing the bare minimum to make a physical appearance at school. Their dynamic is concerning, and rightfully so.

Maja leaves her cell in solitary confinement to sit in court, to be judged, to face the people she has hurt, and to prove that she was truly in the wrong place at the wrong time. The female prosecutor questions her, pushing Maja to say that she had intent to kill, that her claims of abuse and assault are false. She wants Maja to admit that she was the one to manipulate Sebastian, the one who planned the events of that horrific day. Tears stream down Maja’s cheeks.

Quicksand captures the depth of some of the most devastating issues that regularly take place in our society: school shootings, mental illness, domestic abuse, sexual violence. Issues of this nature are not commonly broached in North American entertainment, and are certainly not collectively addressed in the average series. So often, Hollywood storytelling wants an audience to leave a film or series feeling happy—resolved. Truth is, we can’t—and shouldn’t—only be fed the easy narratives. We gravitate to film and television for many reasons, one being that we want to see ourselves portrayed, both on a micro and macro level. We want to connect. We want to see different realities. Quicksand gives us those, not shying away from the uncomfortable realities that some feel to be taboo or inappropriate.

I hope you allow yourself to be enveloped by this series. Whether you like it or not on its entertainment value alone, notice its courage to go places that are not comfortable or safe. Do more than passively watch, because Quicksand demands that we ask ourselves: Who are we? How did we get here? Where do we go now?