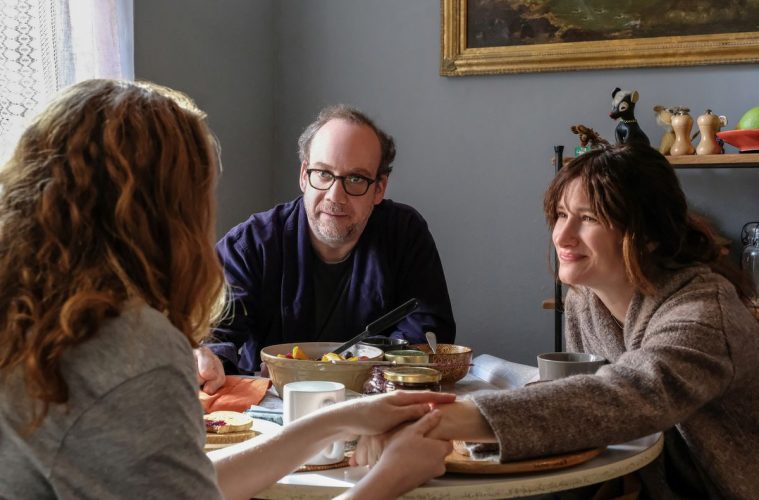 We live in a world that celebrates success. It’s simple. The more you do and the younger you are when you do it, the more successful you are. Or at least appear to be. But if you don’t accomplish anything, or at least what everyone else accomplishes, you’re deemed unsuccessful. People will look at you differently or pressure you into focusing on something else. You can’t blame them though; it’s just our society. Humans, especially women, are determined to get everything accomplished as soon as possible and put the domestic part of one’s inevitable life on hold until everything is perfect. This is why women are now getting married in their early thirties. They’re simply focusing on their careers before becoming someone’s wife and mother. But what happens when you blink and find yourself exactly in the same place you were ten years ago, only nothing you thought you would accomplish became a reality?

Tamara Jenkins’s latest film, Private Life, explores just that. The film centers on Rachel (Kathryn Hahn) and Richard (Paul Giamatti), a New York City couple that’s trying to have a baby. Rachel is in the final stages of publishing her book, and Richard, who once ran an experimental theater company, now owns a pickle company. They embody literature, theater, and the art scene that makes every college student want to move to Manhattan. They’re creative and academic people who love to create, especially with each other. But now they want a baby, and unfortunately, at 41 and 47, respectively, that’s a little difficult.

At first glance, Jenkins’s first film in nine years is about a couple desperately trying to start a family in any way possible. There are countless glimpses of procedures, needles, and several conversations in a waiting room and a doctor’s office as Rachel and Richard try to conceive. They’ve tried IVI, IVF, adoption, even surgery – everything under the fertility umbrella, but still no baby. So, when the doctor says that they would have a better chance of conceiving with an egg donor, they start to cross boundaries by asking their step-niece to help out. But even though Rachel and Richard are dead set on having a baby, Private Life isn’t necessarily about a baby.

Jenkins reminds the world that she is one of contemporary cinema’s most talented writer-directors. Arguably the female equivalent of Aaron Sorkin, Jenkins’s words have a certain tempo and honesty to them that feels somewhat poetic. She’s able to tell a joke with a sneering hint of realism that’ll have any audience member step back and reflect on their lives. It’s her ability to layer all those emotions and themes in a line or two that makes the film seem natural and completely improvised – especially with stars like Hahn and Giamatti. But it’s all her; within every line spoken, there is a hidden meaning. Even if the audience has nothing in common with upper-middle-class, white New Yorkers in their forties, Jenkins’s words will make you connect to them and relate your life to theirs. That is the talent of Jenkins: making her characters relatable to her entire audience.

The film is funny, dramatic, absurd, and witty – just like life. It shows how fast an awkward Thanksgiving dinner can turn into a family catastrophe, and how annoying it is that we’ve yet to invent exam table paper that doesn’t stick to you at the doctor’s office. But then Jenkins will suddenly sting you with lines about adulthood and life. The characters speak openly and truthfully about the stage of life they’re in and the challenges they face. It’s a well-oiled machine with the intensity of the opening night of an O’Neill play. But it’s not; it’s a Netflix film.

Alongside Jenkins’s powerful words are gut-wrenching, yet truthful, performances. Hahn and Giamatti serve as the film’s great leaders, providing excellent portrayals of a couple struggling to begin the next stage of their lives. Both seemingly transition from dramatic to comedic and dramatic again without blinking. Their chemistry is electric while performing with a raw emotional truth that demands that anyone with a beating heart listen. Both will make you laugh and gasp in the same line and constantly push the envelope. They set the bar high for the entire film and never lower it. There are other great performers too, like newcomer Kayli Carter, who plays Sadie, the step-niece who recently dropped out of college; and Molly Shannon, as Sadie’s mother who just started menopause. But it’s Hahn and Giamatti who steal the show.

We all knew that Giamatti was capable of dramatic intensity as well as having comedic chops, which makes Hahn look like a piece of buried treasure. Hahn, in one of her greatest performances to date, is able to be loud and hysterical one minute, and introverted and self-conscious the next. She can land the best jokes in the script while also portraying a woman filled with guilt that her body is failing her and regret that she should have started a family sooner. But in the midst of all of the conflict in Private Life, Rachel and Richard love each other deeply, and the audience never forgets that. It’s in the moments when Rachel and Richard have whole conversations just by looking at each other, or fighting one minute and then laughing the next. They’re completely honest and comfortable with each other; a true team on this journey together. Jenkins’s words may be poetry, but it is Hahn and Giamatti who make them sing.

Yes, Rachel and Richard are desperate for a child, but that is not what this film is about. Ultimately, they’re trying to deal with the fact that they are in the exact same place they were in their twenties and thirties. They’re in their forties, living in the same apartment, still yet to accomplish their dreams. Richard never won that Tony award and Rachel never became that bestselling author, and on top of that, they don’t have children. They still feel as if they have so much to achieve while living with the pressure of not having what society deems a “real” family. In order to try to make their dreams a reality, they kept putting off the idea of a family. They waited until the show opened, until the book was finished. They waited and waited until when they were finally ready, their bodies weren’t. Rachel and Richard are in a synchronized, mid-life crisis together, and will do anything to force the next phase of their life to begin because, at the end of the day, they don’t know what else to do next.

John Lennon once said, “Life is what happens when you’re busy making other plans.” As much as we’d like to, we can’t control life. It sneaks up on you and makes you suddenly question where all the time went. One year, four years, even ten years go by faster than one thinks. Private Life challenges that concept. How to deal with the loss of time. What to do next, and the difficulty in transitioning to the next phase in life. Whether you want to or not.