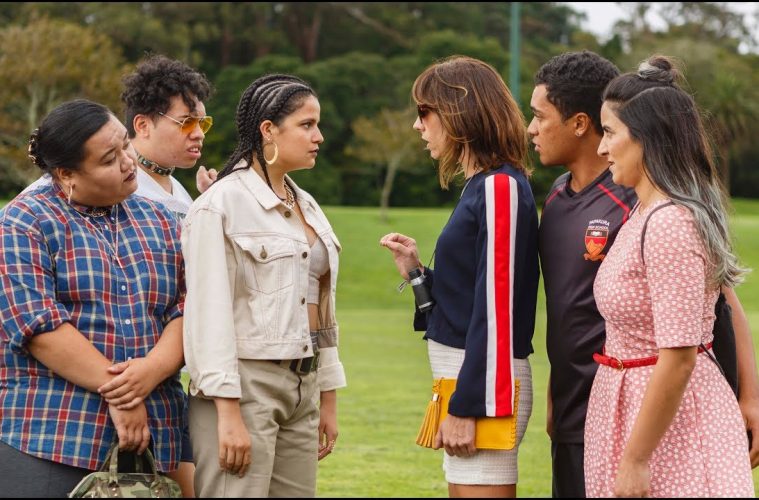 Review: ‘The Breaker Upperers’ is Loud, Funny, and Unapologetically Feminist

Like any good romantic comedy, The Breaker Upperers ends with a couple reunited. But in this film, co-directors, writers, and stars Jackie van Beek and Madeline Sami ditch romance altogether, and it’s their alter-egos and best friends, Jen (van Beek) and Mel (Sami), who realise how much they love each other.

When you think New Zealand comedy, you think Flight of the Conchords and you think Taika Waititi. Both have achieved international fame, with the comedians-cum-musicians the Conchords recently reuniting on a sold-out tour across the UK and Waititi becoming an unlikely Marvel darling having directed Thor: Ragnorok. The presence of both are felt in The Breaker Upperers, as it’s executive produced by Waititi and the Conchords’ Jermaine Clement makes a cameo appearance. But despite the poster declaring “From Taika Waititi,” The Breaker Upperers has a distinctly female Kiwi voice and marks van Beek and Sami as a brilliant double act in their own right.

The film opens with Jen and Mel, two police officers awkwardly informing Anna (Celia Pacquola) that her husband has died and that his body has gone missing. Mel tries to snaffle a biscuit while Anna wails and sobs with absurd, hysterical force. As they make a hasty exit, reveal the husband alive and well and hiding in the boot of their car, and take off their faux-uniforms, we realise that these women aren’t police at all.

A hugely enjoyable montage introduces us to their madcap money-making scheme, evoking Wes Anderson in its whip-pans, kitschy decor, and use of Vivaldi’s tinkly “Concerto for Mandolin in C Major” Jen and Mel break up couples for cash, staging everything from kidnappings to crashing gay weddings with surprise pregnancies on behalf on clients who are too cowardly to dump their partners themselves. “I want whips, I want chains, I want a hundred shades of grey,” says one unsatisfied lady, “he’s not even one.” Mel takes a fancy to eighteen-year-old Jordan (James Rolleston, who Waititi fans will remember as the titular Boy), who’s looking to dump his domineering girlfriend, Sepa (Ana Scotney). As Mel embarks on this ill-advised relationship and develops a conscience about their antics, her friendship with Jen threatens to be the next relationship to break up.

While the high-concept plot has logic holes that are large enough to drive a police car through, The Breaker Upperers remains stubbornly intact, largely thanks to the sparkling chemistry between van Beek and Sami. Much of the film’s joy comes from simply watching Jen and Mel spend time together, whether they’re warbling Celine Dion impressions or performing a hilariously impromptu striptease in a police station. At one point the film takes a detour to indulge in a tribute to Dion’s 1996 hit “It’s All Coming Back to Me Now,” featuring fabulously campy 90s costumes.

Both Jen and Mel present unconventional visions of womanhood that we’re still unaccustomed to seeing on-screen. It seems reductive to compare every female-led comedy to Bridesmaids, and yet van Beek’s Jen exudes an eccentric brittleness concealing vulnerability that feels very reminiscent of Kristen Wiig’s performance. We see Jen partaking in plenty of “bad” behaviour, from shamelessly making a quick buck off of people’s heartbreak to snorting cocaine at her mum’s house. She might be hung up on the ex who cheated on her but she still objects to her mum’s only photo of her on display at home being one of her and a man.

The less love-cynical Mel is proudly bisexual and has no reservations about pursuing her desire for the much younger Jordan. Both women enjoy sex, neither are punished for their enjoyment, and neither are objectified for the sake of a male gaze. Even the aforementioned striptease, in which a lesbian police officer twigs that they’re not really cops and assumes they’re a birthday surprise for her, is for the pleasure of a woman’s gaze. Societal expectations of romance being the answer to women’s fulfilment are reversed here as, in the end, their romantic relationships pale in insignificance compared to their relationship with each other.

Cameos abound, including girl-power icon Lucy Lawless, Zena: Warrior Princess herself. Most are familiar faces from Waititi’s filmography, from Oscar Kightley and Troy Kingi, two highlights from Hunt for the Wilderpeople, to Karen O’Leary, repeating her role as a policewoman from What We Do in the Shadows. Rima Te Wiata, who memorably sang the Ricky Baker Birthday song as Auntie Bella in Wilderpeople, plays Jen’s fabulously vulgar mother who bellows about sex in a comically fake English accent. James Rolleston as Jordan gets many of the film’s funniest lines, but Ana Scotney as his fierce yet oddly endearing ex-girlfriend, Sepa, steals scenes out from under him in her film debut.

A box office hit in New Zealand and Australia, The Breaker Upperers premiered internationally at the South by Southwest Film Festival in Austin, Texas, and recently screened at the BFI London Film Festival. Netflix has snapped up the distribution rights and it should be arriving in 2019. This guarantees it a more substantial global audience, probably through the algorithm’s inevitable “Explore Titles Related to Hunt for the Wilderpeople” categorisation. The Breaker Upperers might simultaneously benefit from its association with New Zealand’s more famous comedy exports and struggle to stand on its own. But as the conversation about diversity in the film industry continues to defiantly gain traction, it’s heartening to see the success of two debut female filmmakers collaborating with each other to tell an exuberantly funny feminist story.