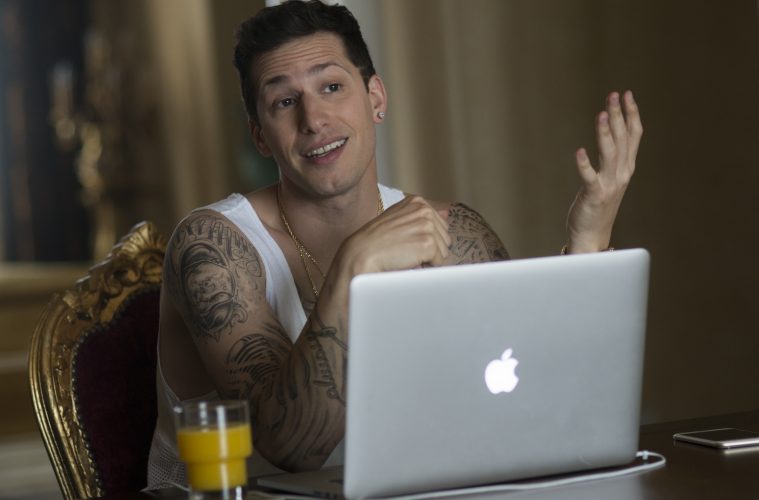 From Stuntman to Popstar: The Contrasting Critical Reception of Andy Samberg Films

Comedy is a genre that rarely gets its proper dues in terms of recognition or critical acclaim. Comedies will be nominated time and time again for Academy Awards, but they are more than likely to be beaten out by a gritty, romantic, or otherwise respectable drama for the honor of Best Picture. When comedies do win that award, it’s for films that resemble a different kind of comedy. Annie Hall is witty and funny, but it’s also thoughtful and mature. The Artist is a comedy, but it harkens back to a golden age of cinema that critics can be nostalgic for. These standards help frame audience’s expectations of genre and taste as well as what kinds of films are considered primitive, respectable, or high art.

Andy Samberg films embody everything that might be considered “lowbrow” about comedies. They have mass market appeal, often using well-liked comedic actors from Saturday Night Live that give the film some symbolic capital. F.R. Leavis was a British literary critic who believed that novels and the literary canon exemplified the highest taste level, and had a disdain for films because he saw them as lesser art forms. According to Leavis, films are indicative of popular culture: “They provide now the main form of recreation in a civilized world; and they involve surrender, under conditions of hypnotic receptivity, to the cheapest emotional appeals…” Films, then – unlike novels – are commercially viable and universally appealing pieces of media that don’t challenge audiences or encourage deep thinking and critical engagement.

Samberg films fall in line with these criticisms of media objects that appeal to the lowest common denominator. His 2007 feature film, Hot Rod, follows Rod Kimble (Samberg), an amateur stuntman who attempts to jump over 15 buses to raise money for his dying stepfather — and then kick his ass. Hot Rod isn’t hard to digest, and it isn’t trying to subvert expectations of the genre and taste level it falls within. Hot Rod is simply trying to make the audience laugh using body humor, spandex, and jokes at the expense of its less-than-bright protagonist. Like many comedies, Hot Rod appeals to the naïve gaze – a concept coined by Pierre Bourdieu who questioned what exactly taste is and who has it in his book, Distinction: A Social Critique of the Judgement of Taste. The naïve gaze is a type of viewpoint often associated with audiences of less distinguished popular culture. It’s about getting direct sensations and pleasure from a media object rather than deep thoughts and abstraction. Pure gaze, on the other hand, is associated with highbrow media objects and is more concerned with form than it is with function. A film like Hot Rod is direct and functional: it wants to get audiences from A to B in the most efficient way possible. Conversely, art films will wander and make audiences look at the world in different, often challenging ways before they reach their destination.

That efficiency is what makes Hot Rod so charming. It’s functional in such a way that it is able to give audiences exactly what they are looking for when they step into the theater: easy laughs, recognizable actors, and a brief distraction from the realities of the world. Hot Rod shows a mastery of the genre’s sensibilities, even if they are universally appealing at their core. This is what gave Hot Rod such a cult following, but it’s the same reason why critics like Leavis believe films can never be considered true art.

Because of (or despite) this, Hot Rod was met with unsavory reviews. On Rotten Tomatoes, Hot Rod is rated 40 percent by critics. However, the audience’s rating on the same site is 64 percent, which can be directed back to this idea of naïve vs. pure gaze. Audiences are more likely to enjoy Hot Rod because it plays directly into their common desires, where critics will have higher standards of the media that they consume. In his review for Variety, Peter Debruge wrote, “Those hoping for feature-length doses of Samberg’s ‘Lazy Sunday’ wit will have to settle for just plain lazy, as Hot Rod aims low and still manages to miss its target.”

Many of the criticisms leveled at Hot Rod come back to the symbolic capital Samberg might be cashing in on with Saturday Night Live and his musical comedy project, The Lonely Island. Samberg’s relationship with his projects is incestuous, and they often leak into one another, as do his audiences – made up of primarily young, white men who attach themselves to Samberg’s goofy, everyman image. They also rely on common, seemingly lowbrow themes: dick jokes, silly wordplay, and body humor. Critics believed that Samberg was just moving these projects to another medium without raising the bar of taste. Hot Rod doesn’t hold up as anything different from a silly summer comedy; it doesn’t make the audience think or come out of it with anything they didn’t expect going in. “There’s no question Samberg has a future in movie comedy,” said Desson Thomson in a review for The Washington Post, “but this caper amounts to a false start.”

Nearly a decade later, Samberg got a different start with the release of Popstar: Never Stop Never Stopping in 2016, changing the critical reception of his films moving forward. Popstar is a mockumentary following narcissistic singer and rapper, Conner4Real, as his second album flops and he struggles with his changing star image. Popstar relies on many of the same conventions Hot Rod does, but this time, they’ve been elevated. Popstar has celebrity cameos, but instead of SNL cast members, they’re music legends: Justin Timberlake, Questlove, Simon Cowell, Mariah Carey, Snoop Dogg, Michael Bolton, and more. There are dick jokes, but they’re fully cemented in parody, which allows Popstar to comment on the comedy genre without being trapped within its seemingly lowbrow structure.

The critical reception of Popstar was much different from that of Hot Rod. Critics rated Popstar 78 percent on Rotten Tomatoes, nearly doubling Hot Rod’s rating. The audience rating, however, mirrors Hot Rod’s at 64 percent. Maybe audiences got a similar experience out of Popstar than they got with Hot Rod, while critics are finally warming up to the idea that Samberg’s work is worth paying attention to. “[Popstar] reveals an insiders’ knowledge of the vapid pop music scene, allowing the jokes, even the weaker ones, to land all the harder,” wrote Frank Scheck in a review for The Hollywood Reporter.

Much of the praise surrounding Popstar can be explained by the critical appeal of the mockumentary. Mockumentaries date back to 1984 with the release of This is Spinal Tap – a concert tour parody film now heralded as a comedy classic – and have been coming more into popularity within the last decade. Most mockumentaries have an intense cult following, but many also have gotten strong critical reception. What We Do in the Shadows, the vampire mockumentary by Taika Waititi, has a 96-percent critic rating and a 86-percent audience rating. This is Spinal Tap boasts a 95-percent critic rating and 92-percent audience rating.

Mockumentaries are like candy to critics and audiences alike because they incorporate elements of lowbrow and highbrow media objects. Most documentaries are serious, which makes for an unexpected but satisfying vehicle for comedy and satire. Parodying the documentary formula and its subjects makes mockumentaries seem like a more respectable form of comedy because it comes with the assumption that the creators have a deep, cultural understanding of the conventions they’re playing on. While Popstar isn’t necessarily high art, it plays into the pure gaze as it explores the film’s form rather than its function. Sure, it may seem to the average moviegoer that Popstar is a goofy film with highly-produced parody songs and musical electrical appliances, but to critics it can be understood as an in-your-face commentary on fame, consumerism, and the fading star image.

How does one categorize films like Hot Rod and Popstar? It’s unlikely that Samberg’s films will ever be nominated for Academy Awards, let alone win Best Picture. But the critical reception of his work parallels that of the rare comedy films that made it out of their perceived taste levels and have been awarded in the past. To critics, Popstar is not just a comedy – it’s a parody, and one that is just as thoughtful as it is ridiculous. It isn’t like Hot Rod, per se, which exemplifies Leavis’s disdain for the mass-market, bottom-of-the-barrel nature of popular culture. Both of these films are proudly silly, and they rely on similar, if not identical, conventions, but the critical reactions could not have been more different. Popstar takes a lot of cues from Hot Rod, but elevates itself, and the standards of the genre, into something worthy of critical acclaim.