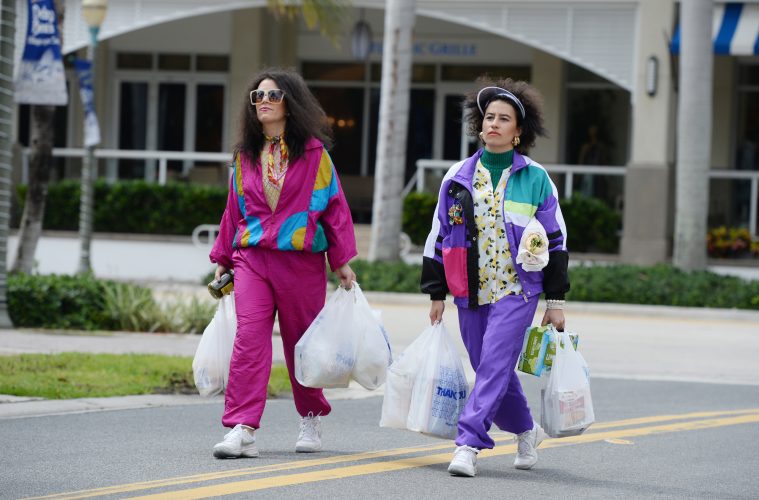 ‘Broad City’ and the Hilarity in Imperfection

Early next year, Comedy Central’s Broad City will air its fifth and final season. The show, based on its web series predecessor of the same name, follows the friendship of two women in their mid-twenties as they navigate life, love, and semi-failing careers together in New York City. Comedians Abbi Jacobson and Ilana Glazer play their fictional counterparts, Abbi Abrams and Ilana Wexler – who are 25 and 22, respectively – at the show’s outset. Over the course of the series, viewers have watched the girls go on all manners of adventures – to varying degrees of success, and more often than not, resulting in some level of damage. Abbi and Ilana go through almost all the experiences that all young women do: they have terrible jobs, they sleep with the wrong people, and they mess up great opportunities.

Broad City has become a cult favorite for a variety of reasons, from the show’s whip-smart writing to its incredible panel of guest stars, to its intelligent yet relatable relationship to pop culture and current events. All of the above are reasons for my love of the show, but the main reason has more to do with the underlying message that Abbi and Ilana promote: that’s there’s beauty in being true to yourself and allowing yourself the freedom to live in the moment. Broad City, in many ways, became my pseudo-bible when I moved to the city at 21. I was anxious about the future, and self-conscious and critical about my every move. Why did I say that when talking to the cute guy at the bar? Did I drink too much at that work party? How was I meant to explain to my friends from university, who were on their way to medical school and working at big banks, that I was a hostess with a part-time gig as a sales associate? I desperately wanted to be like the people I was seating at the restaurant – glamorous, powerful, and self-assured. Instead, I found myself working two (and sometimes three) jobs to make rent, and felt like a failure.

Abbi expresses this exact same melancholy I experienced throughout the show. She desperately wants a full-time career as an artist but can’t seem to take hold of the few opportunities that come her way. One of her early successes comes in the form of a piece of her art being displayed in a sandwich shop – hardly the glamorous gallery opening she was hoping for. She is embarrassed by her job at Solstice, the upscale gym where she works as a janitor for the first two seasons. She experiences moments that all 20-somethings do in their first “real job” – from the embarrassing (getting caught lying to her boss), to the demoralizing (being publically told that her specialty is unclogging the drains), and the totally inappropriate (hooking up with her colleague while still at work).

Ilana, on the other hand, doesn’t feel any desire to pursue a career of any kind. For the majority of the show, she works at Deals Deals Deals, where she slacks off and hardly ever shows up. She also works at a temp agency, a gig she manages to spectacularly mess up. After she is fired from Deals Deals Deals for posting a bestiality video to the company Twitter account, she finds work at a hip Japanese restaurant as a waiter. Ilana proves irresponsible with her newfound wealth from her tip money, highlighted in one episode by her $450 manicure, but she’s content with this lifestyle she leads.

The girls aren’t portrayed as failures on the show for having less-than-desirable work and life experiences. Instead, this is considered totally normal in their world and a punchline for their jokes. Even their more successful friends – Lincoln, for example – don’t look down on their jobs but instead encourage them. While Abbi feels insecure about her job, as many young people do, Ilana shows pride in her friend and showers her in compliments, trying to boost her confidence. They celebrate each other’s successes, no matter how minor, and support each other’s dreams. In a particularly touching moment, Ilana buys Abbi’s sandwich shop artwork. While the girls are often critical of themselves, they shower each other with love and support. They show that to be valued and loved by each other, they need only be kind and supportive and loving, while the factors typically considered important measures of success – wealth, line of work, social status – are undervalued, if not completely ignored by the girls.

The show doesn’t look at these defining moments at work as other shows often do – a one-shot take on a major issue that becomes easily resolved or forgotten about by the next episode. Think Friends, where most of the characters’ work plights are solved within an episode or two, and are usually forgotten. The girls both get through their work woes with hilarity. Their escapades – skipping work with lines like, “I have to go get tested,” breaking $1400 equipment, hiring a horde of unpaid interns without authorization, or wearing completely inappropriate outfits – carry on throughout the series and allow for comedic relief as well as a portrayal of two young women who don’t take themselves too seriously. They aren’t so focused on the rat race that they can’t have fun and enjoy their youth, which women are often demonized for doing, as it makes them out to be sexually promiscuous or not marriage material. Their potential as wives and mothers isn’t what drives them, but rather their potential as individuals seeking happiness and fulfillment in their lives – which they often do at the expense of their work performance.

Broad City also looks at female sexuality with a far more realistic lens than the majority of shows on television. The girls don’t have magical, perfect sexual encounters. In fact, they’re far from it. The girls have gone home with DJs that have tried to maneuver them into a foursome, have slept with men they found boring but available, and in a particularly hilarious episode, Ilana starts dating a “woke” comedian who’s is perfect in every way except for his nonexistent comedy skills. The majority of the time, the girls view sex in the same way men in their twenties are often portrayed as viewing it – as desire, as something that doesn’t require deep connection and meaning, and as something perfectly healthy that they can discuss and joke about later. The girls don’t concern themselves with whether their numbers of sexual partners are too high, of if they’ve had too many one night stands, or if others consider them to be slutty. Instead, they support each other’s sex lives and promote open communication.

Viewers have watched Abbi sleep with someone in mid-summer NYC, sans air conditioning – leading to an incredibly overheated, unsexy situation. In a particularly iconic episode, Abbi and her longtime crush, Jeremy, have a long-awaited romantic encounter. During what’s supposed to be Abbi’s perfect moment, he asks her to peg him. Abbi, freaked out, calls Ilana for support, who gives her a pep talk. Afterward, Abbi feels like a hero – she won the guy, had great sex, and fulfilled his desires, impressing both herself and Ilana – until she accidentally melts the strap-on in the dishwasher, leading to Jeremy’s freak out and their eventual break-up. One of the best parts of this episode is that it’s Abbi’s shocked reaction to Jeremy’s request that faces criticism, not Jeremy’s request. His seemingly unusual sexual desire is portrayed as a healthy expression of sexuality, and Abbi’s stiff reaction to exploring her own sexuality is seen as limiting and unhealthy. None of the characters mock Abbi for partaking in what she sees as an outlandish request, but instead encourage her to explore her sexuality. The show also consistently discusses porn and female masturbation, but without the male lens that is so often applied with other shows. Instead, these moments are shown as realistically as possible, with the girls openly discussing these topics without shame.

The girls’ love lives are no different. At the outset of the show, Ilana is sleeping with a successful dentist and good-natured jokester, Lincoln. While she does often exhibit behavior that proves she has genuine feelings for Lincoln, she insists that they are only in a casual sexual relationship, and often sleeps with other people over the course of the first two seasons. Lincoln, who wants more commitment from Ilana, is accepting of her decision but breaks off their relationship in the third season so that he can be monogamous with his new girlfriend. This deeply hurts Ilana, who realizes that she cared for Lincoln more than she was willing to admit. In the fourth season, Lincoln breaks up with his girlfriend and, after realizing how much he meant to her, Ilana agrees to try a monogamous relationship. This difficulty she experiences in committing to someone while so young – she’s 22 at the start of her relationship with Lincoln – as well as her hesitation to give up her independence and be vulnerable about her emotions, are all valid fears many young women face.

Broad City is an important show. It’s a successful, female-led comedy that gives women the necessary space to be real, messy, and most importantly, funny in their own right. The characters stay true to themselves throughout the show and demonstrate the power of female friendship in getting you through anything. I watched the show during years of dizzying change in my life – graduating, moving to the city, going from a hostess to working in a 9-5 job, falling in and out of love. Broad City mirrored some of the issues I was facing, and showed two women getting past their own hurdles with humor and grit. It shows that women can be independent, deserving of love, and happy without the characteristics of success that we usually attribute to happy endings and pressure ourselves to achieve – a high powered career, a #goals-worthy relationship, or financial stability. Above all, Broad City reminds young women that we can get through anything – the good, the bad, and the hilarious – with our Abbi or Ilana by our side. I know I’m grateful for mine.