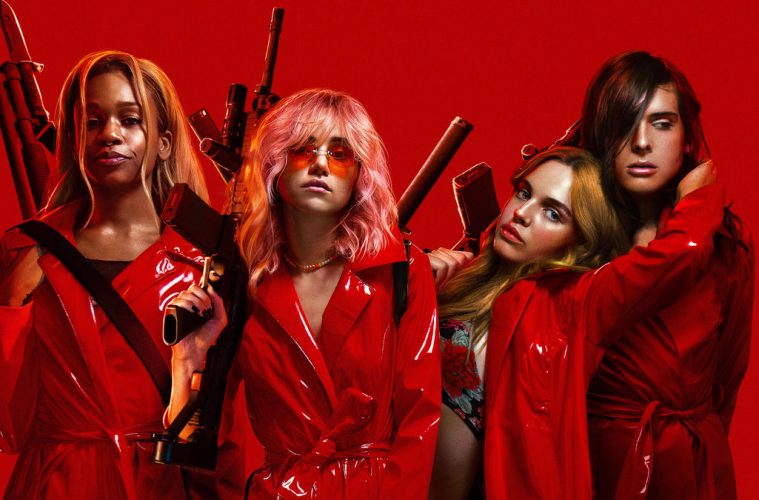 “This is the story of how my town, Salem, lost its motherfucking mind,” opens Lily (Odessa Young), the heroine of Assassination Nation. Clearly, this reimagining of the Salem witch trials by Sam Levinson is not a very subtle film, nor is it trying to be. It’s outrageous, it’s campy, it’s gory – but most of all, it’s angry.

The story follows eighteen-year-old Lily and her best friends, Bex (Hari Nef), Em (Abra), and Sarah (Suki Waterhouse), as they are blamed and punished for a hack that targets and exposes the private pictures and conversations of half of Salem’s population, causing the town to spiral into chaos. It doesn’t matter that Lily has nothing to do with it, and that she is a victim of the hack herself – the town needs a scapegoat, and she is too beautiful, too clever, too confident, and therefore too threatening to get away with it. Assassination Nation smartly blends the history of the real witch trials with the contemporary tendency to target teenage girls and their sexuality; specifically, it spells out the process according to which they are encouraged by society to develop their sexuality prematurely, are measured according to it, and then quickly shamed as soon as they gain control of it.

Being firmly grounded in the digital age, Assassination Nation takes our obsession with social media and exaggerates it by turning it into mass hysteria. When the older generation finds itself in danger because of a system that they actively take part in but don’t fully understand, their immediate reaction is, of course, to blame teenage girls – the foremost practitioners of the occult art of social media. In this sense, Assassination Nation is less about witches than it is about what they represent, which is everything that is alluring and unknown, and can therefore be sacrificed in the illusion that it will cure a larger evil. But because this film is constantly on the witches’ side, we see them as they are, which is symptoms, and not causes. The figure of the witch is dismantled from the inside by showing us Salem’s descent into chaos and the process of Lily’s “witch-ification” through her blameless eyes. In short, Assassination Nation suggests that you can’t be born a witch; you are made into one.

These particular witches, unlike their 17th century predecessors, fight back. Lily and her girlfriends start by defending themselves and end up becoming avengers of their entire gender, channelling their anger into a bloody fight against patriarchy, “fragile male egos,” and toxic masculinity (as they appear in the trigger warnings listed at the beginning of the film). It’s as on-the-nose as it sounds, but it’s an effective satire precisely because it speaks the same language as the discourse it’s critiquing. Everything is blown-up, taken to the extreme, and stylised, which is precisely what happens on social media. Except that Assassination Nation is way more fun.

In fact, despite its fundamentally serious subject, the film knows better than to take itself seriously. It’s not a demonization of social media and it definitely doesn’t consider itself above it, as most films which deal with these issues do. Unlike Black Mirror and all of its imitators, Assassination Nation is not a cautionary tale, nor is it preachy. It’s not suggesting that technology is evil; it’s pointing out an established human behaviour – the tendency to dismiss young girls and anything perceived as feminine – that is only amplified by technology. And instead of suggesting the unrealistic solution that doing without social media is the best way to defeat it, it provides us and its protagonists with the only effective weapon: ironic distance.

Lily, Bex, Em, and Sarah understand the fundamental principle that making fun of something is the most effective way of neutralizing it – particularly Hari Nef’s character, Bex. She is the sarcastic heart of the group, the sharp-tongued wit master who is always ready to defend her friends and herself from the meanness of the people surrounding them. Lily is similarly defiant, always ready to challenge authority by provoking its weakest spots. However, when the stakes become too high and their lives are in danger, it’s the film itself that adopts their attitude. It’s when the girls are at their most vulnerable and forced to fight for their lives that Levinson has the most fun as a director. While never losing empathy for them, the final part of the film stylises the ways they are tortured and transforms them into a triumph of outrageous violence and pulp. Far from being dehumanizing and exploitative, though, this strategy functions as a way to distance ourselves from the implications of the violence that our heroines are enduring, and has us rooting for them instead of voyeuristically gazing at them. This choice is particularly successful when the girls give into the violence and start fighting themselves. Because they are in control, we can rightfully take pleasure in the on-screen violence because they are the perpetrators, and not the victims.

Ultimately, then, Assassination Nation is a revenge film in which girls team up and vindicate centuries of abuse and misconceptions, and do so in stylish, matching, crimson-red raincoats.