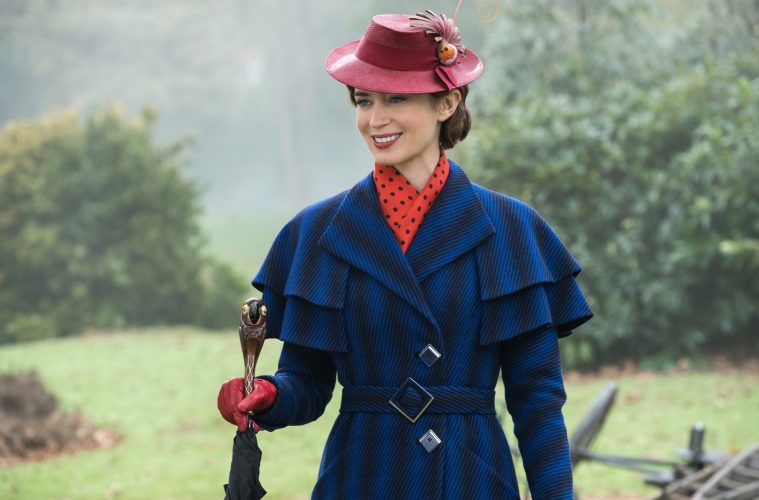 Growing up the daughter of a single, working mother, I was watched by my grandmother many evenings. As a result, I spent countless hours of my childhood with the Banks family and the incomparable, divine Mary Poppins, famously played by the legendary Dame Julie Andrews. A favourite of my grandmother’s, Mary Poppins (1964) was a staple in the household, and, regardless of my incessant nightly pleading to watch any other Disney classic for a change, she seldom relented. The outcome is that I’ve seen the film an extraordinary number of times in my life. However, currently well into my twenties and now hardwired with a deep love of musicals, I wouldn’t have it any other way. So, as you can imagine, I was a touch apprehensive when the first rumours started to circulate that a sequel was in the works.

After it was confirmed that it was, in fact, a sequel and not a remake, and the worrisome question of who would be playing the lead was answered in the gracious form of Emily Blunt, my unease shifted gradually to cautious optimism. Like its predecessor, Mary Poppins Returns is based on the novels by author P. L. Travers, and picks up again as the magical nanny soars back into the lives of now adult siblings, Jane and the recently widowed Michael Banks, as well as Michael’s children. In similar fashion to the 1964 film, Poppins’s arrival signals a change in the winds, and with the assistance of song, dance, and an exuberant lamplighter, she cleverly guides the Banks household through both the practical and emotional pains of familial loss, while once again restoring joy inside the beloved walls of 17 Cherry Tree Lane.

The tone of Mary Poppins Returns is established as soon as the opening credits begin. Smoky images delicately drift on-screen accompanied by the overture, while providing the names of the hardworking souls behind the production when the audience is most likely to see them. It’s a practice not often utilized anymore but already hinting towards the film’s keen mindfulness of classic musical cinema. Soon after, Lin-Manuel Miranda’s voice swiftly takes us back to our youth with his wistful rendition of “The Lovely London Sky,” and reels us into the nostalgic world of flying kites, feeding the birds, and diving into dazzlingly-coloured chalk drawings.

As part of the talented (and thankfully more diverse) cast breathing life into the story, Miranda’s cheery and heartfelt depiction of Jack the lamplighter, a former apprentice of Dick Van Dyke’s Bert the chimney sweep, emphasizes the intelligence in casting actors as they once did in musicals—those experienced in simultaneously singing, dancing, and acting. In one of the film’s standout songs by Marc Shaiman and Scott Wittman, “Trip a Little Light Fantastic,” Miranda showcases his skillful moves in a boisterous group number. Likewise, it’s a gift to watch him draw on his vocal roots of Hamilton in “A Cover is Not a Book,” another song deserving of an honourable mention. It’s a catchy, memorable duet with Emily Blunt, whose charming dancing and full, lovely voice also prove her worthy of her role.

Practically perfectly hand-picked by Rob Marshall, who has directed such tremendous musicals as Into the Woods (also starring Blunt) and Chicago, Emily Blunt has a presence and watchability akin to past marvellous leading ladies like Judy Garland and Carol Channing, a factor that has been lacking in some more recent musicals.

Wisely, Blunt doesn’t attempt to imitate the version of Mary Poppins originally portrayed by Julie Andrews, the one that earned the latter her Best Actress award in 1965. Instead, her performance is decidedly bolder, and closer to the character in the books and theatre adaption than Andrews’s original take. Yet, she still brilliantly manifests the endearing qualities we came to love about Poppins in the first place, namely her wit, strong self-assuredness, and playfully vain personality—with an underlying natural kindness to balance her stern disposition. A role model in confidence for women, no matter the decade.

In addition to Blunt and Miranda, the film features a superb supporting cast that includes performances by Julie Walters as zany maid Ellen, Emily Mortimer as a genuine and believable Jane Banks, and Colin Firth in the villainous role of wolfish bank owner William Wilkin. Also not to be forgotten—and possibly overshadowing the others—are the three incredible child actors, Pixie Davies, Nathanael Saleh, and Joel Dawson, who play the adorably earnest children of Michael Banks. Regrettably, it’s actually Meryl Streep as Mary Poppins’s eccentric second cousin who seems to fall short and not quite fit the film. Happily, the same can’t be said about the cameos of Dick Van Dyke and Angela Lansbury, both of whom are absolute delights in their short times on screen.

Intentionally not listed above is Ben Whishaw, since his portrayal of adult Michael Banks is transcendent. His gentle testimony of spousal grief and his tender singing voice are heartbreaking, as he grapples with the pain of loss and finds himself staving off becoming the hardened man his father was before Mary Poppins initially entered their lives. Whishaw’s quiet moments beg the audience to find their lost attention spans, something classic musicals used to simply expect and not have to tentatively ask for through slow or drawn-out numbers.

By weaving together elements like unabashedly gleeful sequences, Emily Blunt subtly yet directly addressing the camera on occasion, and a production design that emboldens each frame with vibrant colours, Mary Poppins Returns reconjures the spirit of classic musical cinema and is an essential addition to the current Hollywood musical renaissance. For its youngest audience members, the film is the perfect introduction to the kind of pure, euphoric joy that can only be invoked by show-stopping musicals. As for those at the opposite end of the spectrum—the most weary, downtrodden, or cynical grown-ups—it’s a potent reminder of the immense power of unadulterated childhood imagination and is unequivocally the cinematic “spoonful of sugar” the world could use right now.