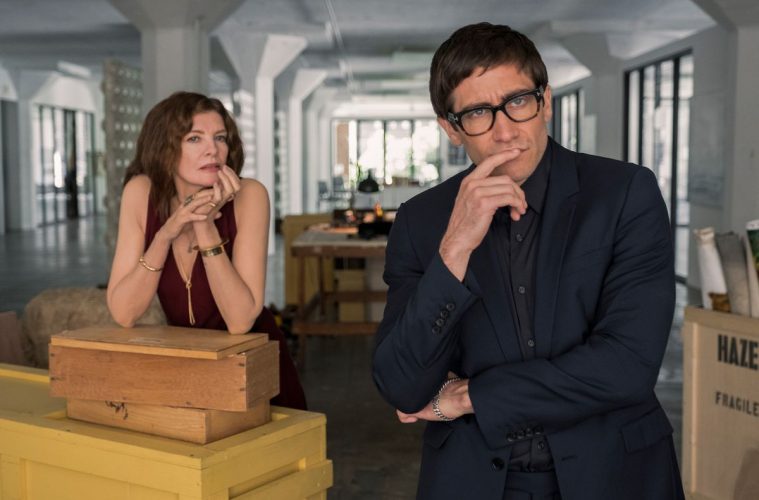 Dan Gilroy has moved from the grimy streets of L.A. in Nightcrawler to the elegant yet equally ruthless halls of the city’s art galleries in Velvet Buzzsaw. Unfortunately, location is the only thing elevated about his new endeavour.

Velvet Buzzsaw is a horror-themed satire of the art world, specifically poking fun at the leaders who are monopolising art and the suffocating pressure that critique and ownership places on unique inspiration. Set in the sleek, L.A. art scene, the plot is launched when a struggling art agent, Josephine (Zawe Ashton of Fresh Meat fame), stumbles upon her dead neighbour. She soon discovers that this recluse was a brilliant artist by the name of Vetril Dease, and, enamoured with his paintings, steals them to release to the public, ignoring the artist’s passing wishes to have them all destroyed. Entangled in this decision are ex-anarchist punk rocker-turned-gallery owner Rhodora Haze (Rene Russo) and brilliantly pretentious art critic Morf Vandewalt (Jake Gyllenhaal). Despite the commercial success of Dease’s artwork, which enriches the professional standing of all involved, it soon becomes apparent that the work is cursed with some entity that’s seeking revenge against these people for not following the deceased artist’s wishes to have it destroyed.

Gilroy loves to explore ethics as well as the consequences for characters who don’t follow any. Velvet Buzzsaw examines artistic ownership and commercial greed. The artist wanted his work destroyed and yet his wishes were ignored, with people capitalising off his labour; this was clearly an immoral act that soon leads to their downfall. Exploring the ethics of art production in a consumerism-driven society is certainly an interesting premise, but the execution just isn’t as intriguing.

The film’s tone seems to sway wildly from tongue-in-cheek ridiculousness to bloody bleakness, thanks to the string of deaths. It’s unfortunate that Velvet Buzzsaw doesn’t just commit to campy fun and join the cult category with horror greats Nightmare on Elm Street or Chucky. Gilroy is perhaps trying to reach the fun, self-aware-yet-scary level of Scream, but falls short. Plot points and film lore are left unexplored and the societal commentary lacks enough originality to be truly enjoyable.

So many potentially intriguing characters fight for the spotlight, but none are given adequate time to present themselves. Characters seem like preliminary sketches, with rarely any opportunity for them to progress to their intended full portraits. Characters like Gyllenhaal’s are written as absurd caricatures; Morf is snobby enough to critique a funeral for being drab and uninspiring. At least Gyllenhaal is entertaining: other characters are either dull or irritating, or serve only as cannon fodder. It’s jarring to see such great actors (including Toni Collette and John Malkovich) play minor roles, and this just emphasises the feeling of potential not being reached.

A horror film can sometimes excuse annoying characters if the threat driving the story is good enough. Unfortunately, the final nail in the coffin for Velvet Buzzsaw is its threat. The deadly force stalking our characters is unrelenting and unbeatable, meaning there is no opportunity for the audience to root for them and hope for their survival. The tone slips into the hopeless realms of Final Destination, causing Velvet Buzzsaw to become a snuff film of elite art agents. Perhaps as an artist, Gilroy has been nursing a fantasy of killing off all the pretentious critics and producers who stand in the way of his art, but do we really need to share in it?

Velvet Buzzsaw is certainly not on the same level as Gilroy’s other film, Nightcrawler. That film has a clear vision, and, like the character it follows, keeps to that with obsessed precision, helping to produce a fantastic piece. Velvet Buzzsaw, on the other hand, is less focussed and a tad messy. It endeavours to mock the stereotypes of the pretentious art industry but instead falls into being a stereotype itself. We’ve seen parody commentary of the art world and American elites done before (like with Julianne Moore’s character in The Big Lebowski swooping naked across her canvas, or the entire absurdity of The Square) and nothing this film puts forward is all that original.

Despite its predictability, Velvet Buzzsaw iscertainly not a terrible film and can be enjoyed, even if it is just to laugh at the ridiculousness of the pretentious L.A. characters. The film is directed very well, presenting sleek, polished shots and some creative and entertaining death scenes. There are funny moments scattered throughout, particularly the fate of innocent assistant Coco (Natalie Dyer of Stranger Things fame) and an awkward break-up scene. Despite glimpses of joy, the script is sadly not coherent enough to produce a great horror film, and even the brilliant cast cannot carry it.

The film looks great and is acted superbly, but the substance is just not there—unfortunately, it resembles the vain and vapid outer beauty it mocks, and fails to reach the mesmerising beauty of Dease’s work.