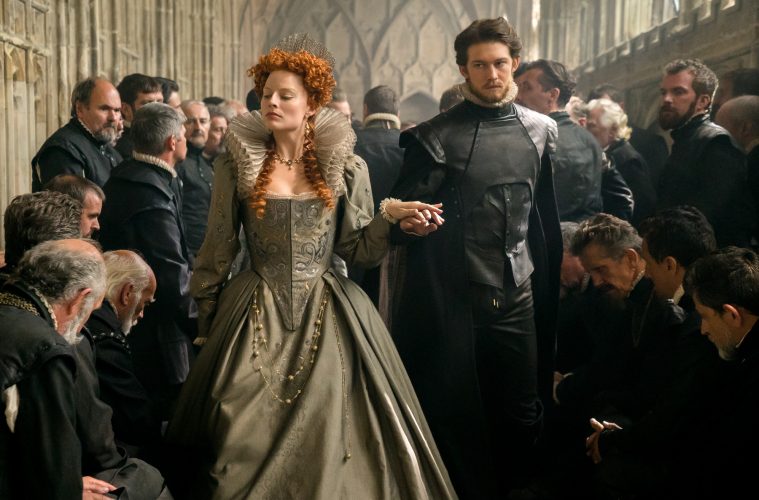 ‘The Favourite,’ ‘Mary Queen of Scots,’ and the Continuing Appeal Of Queens On Film

The trick to making history come alive is to make the audience forget that they know how something’s going to end. The first film to adapt the life of Mary, Queen of Scots was an 1895 film that caused controversy for its excessively convincing beheading sequence. Since then, the notorious Mary’s story has been filmed six more times, with the Queen portrayed by screen royalty, including Katharine Hepburn and Vanessa Redgrave. Josie Rourke’s recent version, titled Mary Queen of Scots, is the first version helmed by a female director, and, as in all other iterations, culminates with the execution of the title character. Like Romeo & Juliet, this is a story where much of the audience comes in knowing the ending. The point is not in how her life ended, but in how she lived, and fought—especially in her contentious relationship with her cousin, Queen Elizabeth I.

There are more than twenty screen adaptations of Elizabeth’s story, many leaning into her reputation as England’s mightiest Queen. The role of Elizabeth has been played by some of cinema’s most regal performers: Cate Blanchett, Bette Davis, Helen Mirren, Dame Judi Dench. In Rourke’s film, the role is tackled by Margot Robbie, and is presented with an immediacy that allows an audience to forget the journey her character will take. Before Elizabeth was Gloriana, the Virgin Queen, she was an uncertain young woman surrounded by cunning courtiers who doubted her claim to the throne. By contrast, Rourke brings us Saoirse Ronan’s assured Mary—too proud and naive to realize that she’s on even shakier ground than her cousin. Both women grow over the course of the film until they become the personas expected of them: Mary; betrayed, abandoned, and defeated; Elizabeth, more powerful than ever. And somewhere between these two poles sits the The Favourite’s mercurial Queen Anne (Olivia Colman).

The Favourite is the first major film to share the story of this lesser-known British Queen. Director Yorgos Lanthimos has thus been gifted with a blank slate in terms of audience expectations, allowing him to form a cultural impression of Queen Anne. Her story is just as fascinating as that of Mary or Elizabeth, or any of the other women who sat on the throne of British countries throughout the past 1500 years of history. There are instant stakes in all of these women’s stories, each of them landing up on their respective thrones due to the lack of any possible male heirs on their family trees. These woman lived in patriarchal cultures in which women were rarely trusted with any kind of authority, and were tasked with leading royal courts filled with men who mistrusted them. This is the same reason that Victoria on Masterpiece or Netflix’s The Crown make so much more compelling television than the stories of their male ancestors: Female monarchs always faced more challenges than their male counterparts. And in today’s culture, which still frequently mistrusts women in political office, these stories are just as resonant as ever.

The coincidence of both Mary Queen of Scots and The Favourite arriving in theatres in the same month lends to the irresistible comparison between them. Aside from their subject matter, the films differ almost entirely in their approach. Where Rourke presents Mary as a straightforward, historical yarn, Lanthimos imbues The Favourite with campy, sly comedy. Yet the common ground both films share are their portrayals of the ways that all three Queens must contend with how to balance their womanhood with their role as monarch. And, setting aside the vastly different end points, each approach is shown to be successful at times. Mary is able to weaponize her youth and beauty against Elizabeth’s chilly virginity; Elizabeth’s refusal to be seen as a woman allows her to see eye-to-eye with her male advisors; and Anne’s middle-aged health concerns mean that her councillors see her not as a woman, but as a figurehead. And the men in each film lash out in three different ways to these approaches.

Mary’s beauty and sexuality are turned against her when her enemies deem her a whore. Elizabeth’s refusal to marry or have children is cause for her enemies to attack her as unnatural. And Anne’s health issues and failed pregnancies mark her as defective. Put together, the three women show how much of a no-win situation they each fell into. Be too pretty, and you’re a slut. Too aloof, and you’re frigid. Try and fail, and you’re washed up. These attacks are similar to the way that female politicians continue to be attacked by their rivals and the media. Pretty young women are redefined as sex objects, older women as shrill hags, and unmarried women as sex-starved spinsters.

Robbie’s Elizabeth decides toward the end of the film that she will live her life “as a man.” This doesn’t mean wearing trousers and cutting her hair, but rather portraying herself as an equal to the men who seek to sideline her. In her clever hands, this means that she creates herself as a kind of armoured goddess; neither man nor woman, but something more on par with a deity. Unable to change the misogyny around her, she harnesses as much power as she can by removing herself from the gender binary entirely. We know today how successful this approach was for her, much as we know how Mary’s choice of husband became her undoing, and also that Anne will be largely forgotten by history.

Ultimately, these two films present parallel images of Queens on film. Mary Queen of Scots reinterprets two well-known narratives for a contemporary audience. The Favourite elevates a long-sidelined monarch to cultural prominence. Both films serve as a reminder of the challenges that even the most powerful women of history would have faced, while also offering a mirror to the 21st-century society in which these stories were created. Historical films tell us as much about the time in which they’re made as they do the time period portrayed. And in both Mary Queen of Scots and The Favourite, the female characters are portrayed as multi-faceted, alternately sympathetic and antiheroic, and altogether real women. Hopefully soon, 21st-century female politicians will be allowed a similarly nuanced portrayal.