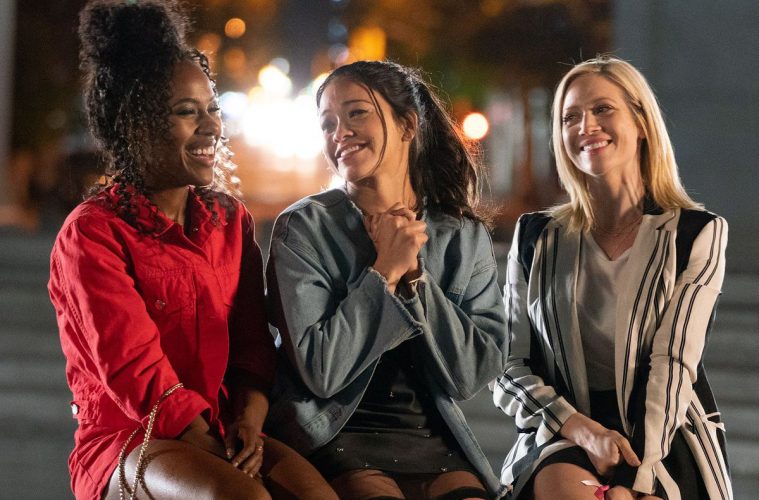 ‘Someone Great’ and the Power of Positive Grieving

Breakups are the worst, even when they’re for the best. When Nate (LaKeith Stanfield) dumps Jenny (Gina Rodriguez) after nine years of dating, she wants to be fine, wants to be strong. Sometimes breakups are that way, but they often feel more like getting drunk at a bus stop, which is what Jenny does instead. In a world of romantic comedies about white people falling in love and staying there, Someone Great depicts the opposite: a Latina who has to maturely examine her emotions and live through a full cycle of grief in order to get on with her life.

The root of the problem isn’t something frivolous, like a misunderstanding or miscommunication: Nate doesn’t support Jenny’s career, for which she needs to move and leave the city behind. Despite years of supporting her writing and committing to their relationship, Nate decides that he’s done, and won’t even entertain the idea of long-distance. Unlike so many rom-coms, getting back together isn’t an option, and no new love interest materializes. Instead, Jenny has to face reality and get over it.

Fortunately, she has the help of her friends, but, as she points out, Jenny is about to turn 30 and move to a city where she knows no one. She is embarking on the biggest transition of her life so far, and her partner is no longer along for the ride. To Jenny’s credit, she ultimately decides that she doesn’t want anyone who doesn’t want her back. The film does include a scene in which Nate apologizes for his behavior, but it takes place in a drunken hallucination. While the truth of Nate’s actions could be viewed as devastating, Jenny chooses to be her own vehicle for closure. Even if Nate doesn’t apologize, Jenny forgives him, and that forgiveness strengthens her as she prepares to move into a future without him.

Sure, Someone Great falls prey to some of the classic rom-com tropes. The main trio of friends are beautiful twenty-somethings who live in insane apartments while working creative jobs, and the main objective might involve those three friends going to a music festival, but the film is more than that. Those friends are intelligently written, loyal and deep, and they aim to create a new landmark memory that can outshine Jenny’s with Nate. Jenny’s friends are taking back New York, and solidifying their friendship in the process. When she finally leaves for San Francisco and that glorious dream job, she knows her support system is behind her every step of the way.