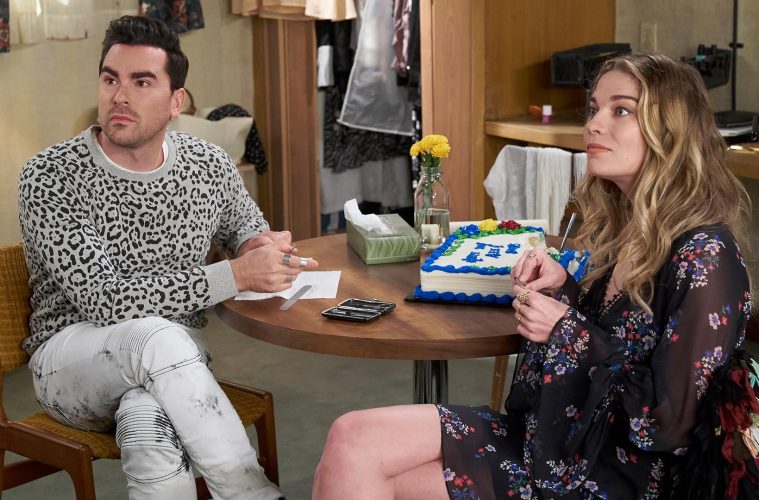 There’s No Place Like Home: Schitt’s Creek, Oz, Narnia, and the Magic Of Finding Yourself in a Far-Off Land

Portal fantasy is a lesser-known term for a concept that most people are acquainted with. It’s the type of story where someone crosses over from their daily life into an extraordinary—usually magical—other reality. While there, they encounter strange new companions, face some manifestation of their deepest fears, and land back in their own world, usually changed for the better. This is the trajectory taken by the Pevensie siblings in the Narnia stories, Dorothy in the Oz sequence, Alice in the Wonderland duology. And lately, in a subverted manner, it has stealthily been the backbone of the hit Canadian sitcom Schitt’s Creek.

But let’s take it back a step. Co-created by father and son Eugene and Dan Levy, Schitt’s Creek premiered in 2015 to modest fanfare. Telling the story of a wealthy family gone suddenly bankrupt, its tropes seemed comfortably familiar in the vein of Green Acres and Arrested Development. The two Levy men play two members of the show’s fish-out-of-water Rose family, which also includes Catherine O’Hara as matriarch Moira and Annie Murphy as ingenue daughter Alexis. The show’s storyline, overseen by Dan Levy since the second season, both pays tribute to and subverts the expected cliches of this territory. Sure, the denizens of the titular small town offer homespun wisdom and the Rose family learns the value of hard work, but this is a show where every character is given both nuance and moments of broad comedy. The locals are not always in the right and the Roses not always in the wrong. It is a story about a town full of people who seem destined to have been together at the same place and time, all of whom find themselves changing for the better—often without realizing it.

Which brings us to portal fantasy. The Rose family, particularly adult siblings David and Alexis, lived a charmed life. While Dorothy Gale left a modest farm life to become a feared witch-hunter in Oz, the Roses complete a seemingly opposite journey. Raised in a mansion so big that they often didn’t interact with one another, David and Alexis spent their teen years living a seemingly charmed life of wealth: travelling, partying, living large. For them to wind up in Oz or Narnia wouldn’t provide a contrast to their fanciful reality: The portal brings them to a town that shares a name with an aphorism about helplessness and uselessness. Not just that, they are forced to share a room and a suite with their parents. For this family, inescapable togetherness is as improbable as a talking faun or a lion Jesus figure. Which is why this is the journey that it needs to undertake.

Dan Levy has spoken about his long-term plans for the series and the progression he intends for each of the characters. This planning is evident as the series, which has just completed its fifth season, continues to refer back to off-hand comments and plot points from the first. In the pilot, David rushes to the aid of his sister after receiving an emergency text—just as we learn, in the third season’s “Driving Test,” that he’s spent much of his life worrying about her. In the pilot, Alexis calls David out for soliciting friends at model castings; by the first season finale, “Town For Sale,” he is able to articulate how Stevie (Emily Hampshire) is the first real friend he’s ever had. David and Alexis grew up with every advantage except for any security other than money. Without the ability or desire to put down roots, they grew up transient. Much as Dorothy’s time in Oz allows her to realize how much she missed the home she used to resent, living in Schitt’s Creek allows the Rose siblings to realize the value of stability and a home to call their own.

Schitt’s Creek is in that way similar to the sort of psychological purgatory faced by Lost’s crash survivors; each person they meet, each situation they wind up in, helps to trigger and provoke them to contend with themselves. The Creek challenges and rewards the parents, too, but Moira and patriarch Johnny both lived “normal” lives prior to becoming lavishly wealthy. They distanced themselves from their own children, but that was the life they chose to build for themselves. David and Alexis were born, like all of us, into a life and situation that they didn’t choose for themselves. They spent their pre-Creek lives assuming that they were happy because they were able to buy everything they wanted.

The only belongings that the Roses were able to keep were their wardrobes, and the series does interesting things with the family’s costuming. In the second season, David conscripts Alexis’s boyfriend, Mutt (Tim Rozon), to construct him an oak trunk to store his knits; he is also seen purchasing luxury sheets and a duvet for his motel twin bed. Without intending to, he has been making his part of the cramped motel room into a home for himself. Unlike Dorothy or the Pevensies obtaining directions and expository assistance from all-knowing witches or God-lions, Schitt’s Creek allows its characters to be their own change agents. David has an initial realization at the end of the first season, when it seems like the family may be able to return to their previous lives. His friendship with Stevie has helped him to realize how much less meaningful his relationships were back in New York, and he runs away rather than return to his old life. This is not his defining moment, but it’s a first hint that he’s started to realize his idealized past was not the idyll he’d thought it was.

Alexis comes to a similar realization in season four’s “Baby Sprinkle” when a group of her former friends wind up in Schitt’s Creek. Her character growth has been so stealth that audience members may not have noticed how far she’s come until confronted with a group behaving like she had in the first season: entirely self-obsessed, seeing no more in the tiny town than its potential as a backdrop for ironic Instagram posts. She turns down their offer of a job and an escape—like David, making her first choice to stay in Schitt’s Creek. By the end of the just-concluded fifth season, Alexis requires the clarification of her local boyfriend, Ted (Dustin Milligan), to realize that her reluctance to leave for a trip is homesickness. That she has never felt this sense of security, let alone attachment to her parents, throws the well-travelled Alexis. Putting down roots in Schitt’s Creek happened so organically that she, like her brother, hadn’t realized they’d done so until offered the chance to leave. It’s a particular sleight of hand of this series, proof that co-creator Dan Levy had always envisioned a multi-season arc for all of the characters. Their growth and change are so gradual and so intrinsically built into the weekly plotlines and clever dialogue that it can be easy to miss exactly how far they’ve come. In another series, with less clarity of vision, David and Alexis’s turns could have come across as less than sincere. Here, it’s tribute to the show’s slow-burn storytelling and nuanced performances that these moments feel both in-character and entirely earned.

It’s another testament to the show’s storytelling that its love stories have never come across as either Rose sibling being “saved” through relationships. That both have wound up with two of TV’s most stable and normcore men—in David’s fiancé Patrick (Noah Reid) and Alexis’s steady Ted—is a way to show, rather than tell, a shift in their priorities. Before Patrick, David had never been in a long-term relationship or told a partner he’d loved them. In allowing himself to open up to the extraordinarily patient Patrick, David finds ways to heal his past heartbreaks as well as become more secure with a supportive partner. Alexis had numerous relationships before Ted (including one with Ted, earlier in the series). Starting in the series pilot, we learn that Alexis has experience both dumping and being dumped—but never in a way that left her feeling vulnerable. Her first true heartbreak was when she and Mutt’s relationship petered out, which allowed her to then understand the way her actions have affected the guys she’s dumped—like, for instance, Ted. Both David and Alexis had previously found a sense of security in their wealth and in knowing that their parents would always support them financially. Through their actions in Schitt’s Creek, both have found a longer-lasting and healthier security with love, a sense of home, family connections, and fulfilling careers that challenge and reward them for their hard work.

With a sixth and final season yet to come, the series has the room to conclude as Dan Levy intended from the outset, providing each of its central characters with a satisfying conclusion based on their own positive personal growth and change. Just as the Pevensie siblings (or at least, the younger two) thrived during their time through the wardrobe in Narnia, so too did a town of oddballs and misfits turn out to be the best place for David and Alexis Rose to create ties and set down roots, establishing their own independent lives outside of their parents’ fortune and their family’s dysfunction. Where else could they discover their true selves, and find support every step of the way? For all their travels and society, neither had truly known themselves until they landed in this place.