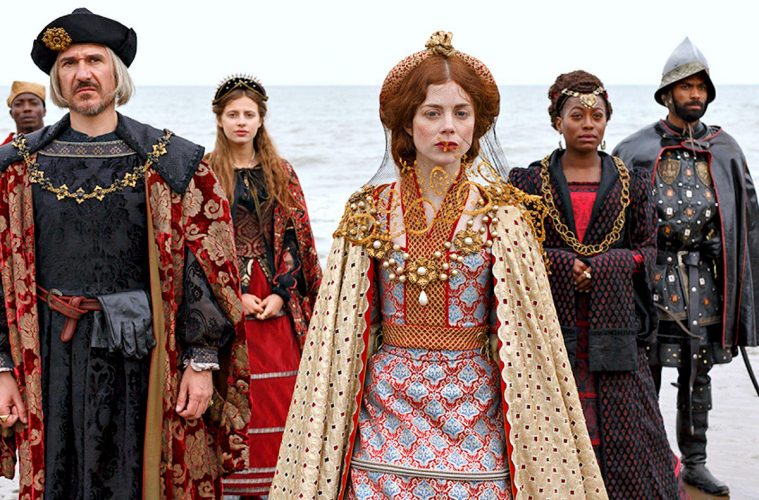 New Perspectives on Old Stories: Diversity in Period Dramas and ‘The Spanish Princess’

As a self-professed history nerd, I live by L.P. Hartley’s words: “The past is a foreign country. They do things differently there.” A 15-year-old girl forced into an arranged marriage with a 16-year-old boy for a political alliance—nothing more than a sign of the times. Since the age of nine, I’ve eagerly devoured books related to the misfortunes of Henry VIII’s wives or the fates of the women caught in the Wars of the Roses. Names like Anne Neville, Elizabeth Woodville, Margaret Beaufort, Catherine of Aragon, Anne Boleyn, Elizabeth I, and countless others are familiar to me, although many were largely pushed to the sidelines of history. Thanks to mainstream pop culture, these names are no longer as obscure as they once were. Authors like Philippa Gregory (and subsequent screen adaptations of her work) and TV shows like The Tudors have created a market for historical period dramas—one that arguably set the stage for the success of Game of Thrones (which is essentially the Wars of the Roses plus dragons/zombies).

Period dramas, at least the ones that are slightly more historically accurate, rely on suspension of disbelief—we may know that we are seeing Jonathan Rhys Meyers in multiple layers of costume, but we believe that he is an aging Henry VIII in The Tudors. Period dramas face the additional challenge of trying to subvert expectations when the audience already knows how the story will end (if they know their history). That said, there is also an opportunity to challenge assumptions about the past. I was pleasantly surprised to have my own assumptions challenged by the character of Lina de Cardonnes in the recent Starz adaptation of two Philippa Gregory novels, The Spanish Princess. Lina, played by Stephanie Levi-John, is a Black lady-in-waiting for the infanta, Catherine of Aragon (I’m going with the series’s spelling but her name can also be spelt as “Katherine”—more historical details can be found on Ann Foster’s amazing blog).

At 16, Catherine (Charlotte Hope) is sent to England to fulfill her destiny by marrying Prince Arthur (Angus Imrie), the eldest son of King Henry VII and Elizabeth of York. She arrives in Plymouth in 1501 with a diverse entourage, including Lina and a Black Muslim soldier, Oviedo (Aaron Cobham). Of course, period dramas—especially those focused exclusively on medieval Europe—exaggerate or stretch the truth. To further hit this point home, each episode ends with: “some historical events and characters have been altered in the film for dramatic purposes.” While this is certainly true for the young Prince Henry (he should be ten years old at the time of his brother’s marriage, not a medieval teenage heartthrob), characters like Lina and Oviedo are, in fact, based on real people. According to The Tudor Society, Catalina de Cardones, an Iberian Moor, served Catherine for twenty-six years as her Lady of the Bedchamber. She married a Moorish crossbowman, Hace Ballestas, who appears to be the inspiration for Oviedo.

In the series, Lina is Catherine’s chief lady-in-waiting and her primary concern is making sure that Catherine is treated like the princess she is—with plenty of rosemary infused baths and siesta. She is fiercely protective of the infanta and shares her suffering as a foreigner in a strange land with strange customs. But her prominent presence in the series also signifies something else. As historian Onyeka Nubia points out: “When we think of Tudor England, we don’t immediately imagine black Africans being part of that society. Yet there were Africans here at that time…” Further proof that Black people existed in Tudor England can be found in Miranda Kaufmann’s Black Tudors: The Untold Story (2017). Yet mainstream portrayals, especially period dramas, often exclude these perspectives because it is falsely assumed that Black people couldn’t possibly have been present in medieval Europe.

There has been a lot of recent discussion surrounding diversity and representation in Hollywood, and period dramas are no exception. Hanh Nguyen from IndieWire refers to recent efforts to diversify period dramas as “Unwhitewashing History.” Some adaptations have made a point of creating their own characters for wider representation, as seen in Anne With an E. Others, like The Spanish Princess, have dug deeper to explore characters based on real people. Showrunners Emma Frost and Matthew Graham shared with IndieWire that they looked to historians like Onyeka to develop diverse characters, and during their research discovered the story of the real Catalina de Cardones. Interestingly, there is a character in Philippa Gregory’s books with the same name, who, although depicted as “larger than life,” was also described as a white Spanish woman. Once Frost and Graham discovered that Catalina was, in fact, a Black woman, they knew they had to explore her story. In an interview with Refinery29, Frost further elaborated: “You can’t re-appropriate history for women and ignore other groups that have been discarded and eliminated. It’s part of the same issue. History isn’t just about white men. Women were there. People of color were there.”

Many historians have cautioned against “rewriting history” to reflect modern attitudes; this is why “presentism” is a taboo word to most historians. To a certain extent, this school of thought is correct. There is a real danger in judging the past by the present because it sets up the expectation that history is a linear progression where modern society is better and more civilized. That said, there is equal danger in ignoring the stories and experiences of marginalized groups. They have always been present—even in medieval Britain—something that sparked a controversial Twitter debate in 2017. Even Frost admits that the series received backlash for including characters like Lina and Oviedo. Academics may have started diversifying their research, but mainstream pop culture hasn’t quite caught up. Frost, however, remains unfazed by the criticism. For the first time, people of colour see themselves represented in a medieval period drama, and that, she says, is what she is most proud of in the series.

We may not be able to change the events of the past, but we can change the stories we choose to tell about the past, and, most importantly, how we tell them. And thanks to The Spanish Princess, I’ll be adding Miranda Kaufmann’s book to my summer reading list.