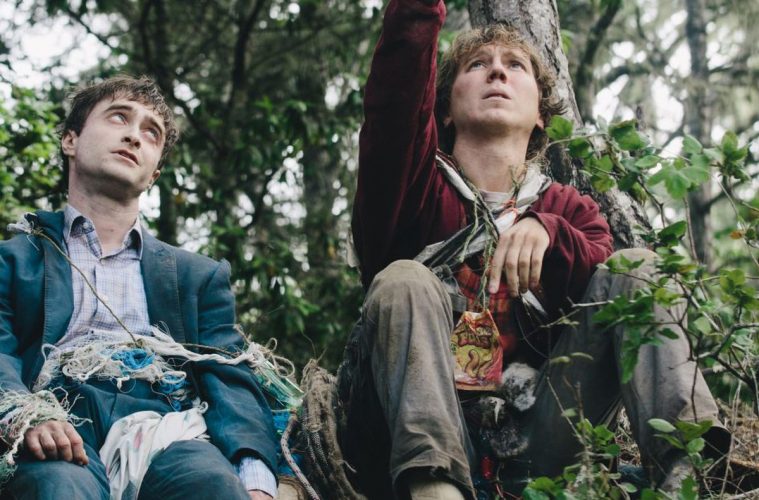 Hank Thompson believes that before the internet, every girl was a lot more special. He believes that no one cares about him—that’s why he left his real life, his sad life, for open ocean waters, and got swept away in a storm. He believes that when he finally finds his way home from being stranded and starving and yearning for death, after riding an overly flatulent corpse like a jet ski, befriending it, and using it like a magical, multi-purpose tool guy, everyone will want to hear his story. He believes that there are certain things you shouldn’t talk about, like masturbation, and things you shouldn’t do around other people, like farting. Hank believes that you’ll bump into the one person you’ll spend the rest of your life with. Above everything, Hank Thompson believes in love.

But what Hank really believes in is an idea of love. An idealized perception of women, and of one woman in particular: Sarah Johnson. The beautiful bus-rider who shared the same route as Hank before he got stranded on a deserted island in the middle of the Pacific, Hank snuck a photo of her in secret and keeps it as the background image on his cellphone. He thinks he knows who Sarah is because he thinks he knows himself, and he projects his desires and insecurities onto Sarah to transform her into the girl of his dreams. Sarah Johnson is who Hank wants her to be—lonely and misunderstood, just like him—but not who she really is: a woman, mother, and wife, with a life that exists outside of Hank’s own mind. But Hank Thompson loathes himself, so he cannot truly love others, no matter how much he fantasizes that he can.

Swiss Army Man is magical realism anchored by jokes about shit and dicks. It’s a movie about an incel extraordinaire who can’t masturbate without being reminded of his mom, and who falls in love with a talking corpse that can shoot objects out of its mouth like a canon. But directing duo Daniel Kwan and Daniel Scheinert’s 2016 film sees in its lead character a shift: Through his relationship with the grotesque, Hank learns to love the grotesque in himself, learns to see his life for what it truly is and love it because of that. Though a man burdened by immense shame and perceptions of what people expect of him, it’s when Hank (Paul Dano) meets Manny (Daniel Radcliffe)—an unidentifiable dead body that has washed ashore on the island where Hank is shipwrecked—that he understands what love truly is. The perverse and the beautiful mingle with one another in a way that lays bare the deep connection between ugliness and love, and how we shed our harmful ideals when we understand that to be true.

Hank’s journey back home begins with a decision: to not kill himself, and, instead, ride on the back of a corpse propelled by its own flatulence. Soon after Hank reaches dry land, he realizes that the corpse—dubbed “Manny,” after what sounds like that name being groaned as the corpse relearns how to speak—is something much more. Though still very much dead, Manny possesses the universal powers necessary to guide Hank back to civilization, not limited to the ability to begin communicating again and his powerfully propellant gas. Fresh drinking water pours from his mouth like a spigot; his arms can be pulled back to chop wood; his fingers can be used to spark fire; his erect dick is a compass.

In an effort to figure out who Manny was when he was alive, Hank’s trek through an unforgiving wilderness parallels the process of attempting to help Manny relearn life; understanding the minutiae of relationships, personal well-being, day-to-day activities, and the pièce de résistance that is Jurassic Park. (“If you don’t know Jurassic Park,” Hank says, “you don’t know shit.”) Hank relays to Manny the mundane intricacies of being human, and, by default, reveals what he believes it means to be human. For Hank, that means hiding pieces of yourself that you feel are too shameful to be exposed to the world. He scolds Manny over and over for his crude, childlike interpretations of adult situations, instructing him to not do or say things that are too weird. Hank acts as if being thought of by others as strange is the worst fate one could befall. “People aren’t supposed to talk about that stuff,” he says to Manny, on the topic of masturbating; or, “If people at home saw me looking like this…” when he dresses up as a crude version of Sarah, using pieces of garbage to visualize for Manny what it was like to ride the bus, see her, and fantasize about her life.

The shame begotten from that experience has lingered with Hank his whole life, coloring his relationship with his father and with himself. Feeling disgrace at the hands of his father for participating in an intimate and very human act kept a wedge between the two of them in the years that followed, alongside a wedge between Hank and his own identity; meanwhile, Hank’s mother’s death following her stimulatory encouragement planted a stopper in Hank’s ability to masturbate. Thus, death and sexuality had interwoven themselves into a perverse, two-headed monster, the likes of which Hank internalized as an intense, lifelong humiliation for being human. So, he locks these shameful parts of himself up in a box and doesn’t open it, reverting into a submissive witness to his own life who’s also partly a product of his father’s toxic aggression. (Hank uses the slur “retarded” at one point, then scolds himself for sounding like his dad.)

By keeping so much of himself hidden from others, Hank ends up living in the paradise of his own mind, fantasizing about women and diluting them to simplistic stereotypes. Because there is no honesty or truth to his self, his perceptions of romance are flawed at worst and ignorant at best. Before discovering one of Manny’s many gifts—that his erect penis can act as a compass—Hank shows Manny a discarded swimsuit magazine that they found in the woods. Trying to teach Manny what it means to find women attractive, he concocts stories for the beautiful models in the pictures, just like he did for Sarah—enriching their vapid, nonexistent lives with what he believes to be beauty, purpose, and meaning. There is no ugliness that can exist for swimsuit models or beautiful girls next door like Sarah Johnson.

But the reality is that we are all ugly and meaningless. Manny is not the only decomposing body fumbling around on the earth, trying to teach itself how to live. Hank is, Sarah Johnson is, and so is every supermodel in the pages of a Playboy. We all take shits and fart and jerk off—our bodies grotesque, our psyches damaged by past trauma, our humanity splintered between two worlds by what is shameful and what is acceptable. To find real love is to understand and find beauty in our inherent ugliness.

As Hank and Manny carry on through the woods, Hank further embraces the absurdity of his situation. He and Manny build an entire world for themselves in the forest as they try to escape it, crafting scenes and scenarios from real life with bits and pieces of discarded trash—creating their own splendor out of what would normally be considered worthless garbage. They bond through this ramshackle universe they create, a parallel between their growing attachment to one another and Hank’s embracing of the garbage reality of the real world. When the pair attempt to cross roaring waters atop a rusty pipe and fall deep into the depths below, Hank kisses Manny in an act of unrestrained romantic impulsion, and Manny breathes oxygen into him—another of his many fortuitous gifts. Manny quite literally breathes new life back into Hank. A new beginning.

In an interview, Daniel Kwan stated that he and Daniel Scheinert wanted to make a film that intertwines both the lowbrow and highbrow, because that’s the reality of our world. Through the use of an absurdist premise, they explored “shame, and the things that keep us away from love.” Hank is not being portrayed as a sympathetic stalker who gets the girl despite his predatory behavior. Quite the opposite: The film ends with Hank running from Sarah Johnson as he attempts to save Manny from being sent to a morgue, after the two of them have coincidentally tumbled from the woods into Sarah’s backyard. In a moment where Hank, a helpless victim, could finally say everything to Sarah that he always wanted, he resists. When she finds her picture in his phone after the police confiscate it, rightfully upset, he tells her the truth. He apologizes: “You just seemed really happy, and I wasn’t.”

Police, reporters, Sarah and her family, and Hank’s own father chase Hank and Manny all the way to the very shore that the pair first ended up on, baring witness to the absurd woodland world that Hank and Manny created along the path to their escape. On the shore, Hank says to Manny, unresponsive, “I just wanted to give you all the things in life that everyone else gets to have, and all the things I thought I didn’t deserve to have, ‘til I met you. And they might laugh at us, they might call us names, they might think we’re weird, but it doesn’t matter what they think.” He begs Manny to wake up—to display his incredible powers and prove to everyone that he’s not insane—but Manny stays silent. So, Hank lets out a fart in front of this crowd of people. Aghast onlookers include his appalled father and the woman who was once the girl of his dreams. He says, “It was me. I did it,” and, in this vulnerable moment, when everyone around him has already taken him for a madman, he allows himself to be vulnerable, too.

It doesn’t matter that Manny finally sputters alive with another bout of flatulence, and that the witnesses to this illogical event have proof of Hank’s fantastical story. It doesn’t matter that Hank’s father beams at him, giving him a nod of approval that might have only ever happened in Hank’s dreams. Before any of that, Hank had already laid his disgusting self bare to the world; his weirdness and his affections for a repulsive, rotting dead body. There was nowhere else Hank could go but inward, finding peace and love within himself, no matter the reaction from other people. Manny represents the true nature of all human beings, and for Hank to have accepted his gaseous blue corpse as reality and bond with him anyway is what it means to truly, deeply fall in love; with someone else and with himself.

Manny grins as he propels himself away and into the ocean. Hank smiles, too.