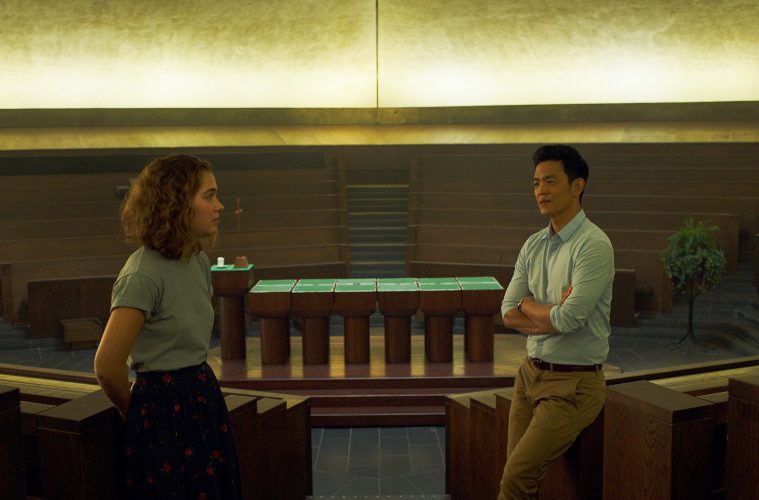 Trauma and Recovery in ‘Columbus’

Trauma often leaves us at a loss for words, and familial trauma is no exception. We struggle to communicate things we’ve gone through because we are afraid others wont understand. We reach out in search of people who’ve had similar experiences, similar childhoods, similar traumas. No one wants to have to explain why their relationship with their parents looks different from someone else’s, but everyone has different traumas and experiences that they carry with them out of childhood and through life. Columbus (2017) explores the ways in which traumatized individuals seek comfort and companionship, while also questioning how and if we can recover from the scars our parents have made.

At the beginning of the film, we encounter Jin, having only recently returned to the United States from Korea in the wake of his father’s illness. In one of his first scenes, he walks around his father’s room in a bed and breakfast, almost pacing as he struggles to fit into his world. As he talks to his father’s colleague, he describes the expectations placed upon him by work and the society that he has just returned from. For Jin, the sense is that he feels suffocated by his architect father and his life, going so far as refusing to learn anything about architecture until he meets Casey.

Casey begins the film seemingly lost. She is adamant that she can’t leave Columbus, Indiana or her current life, and that no one can really understand her reasons why. Casey works, Casey thinks about architecture, Casey cooks, Casey cleans, and then her mother complains. Early in the film, there’s a scene where Casey and her mother are huddled together on their couch. Casey’s mom leans against her daughter as Casey slowly combs her hands through the older woman’s hair. It’s the perfect picture of caretaker and cared for, only their expected roles are reversed. Casey acts as if she is the adult in the relationship. Casey has become dependent on her mother depending on her, unsure of what would happen if she were to follow her passion and leave her mother to fend for herself.

As the narrative progresses, Jin becomes intrigued by his father and his father’s work. As Casey introduces him to the world of architecture, Jin begins to respect the ways it can impact and change a person. Jin inhabits his father’s space more comfortably, even attempting to learn more about the older man through his journal. He appears to be more relaxed and starts using his father’s room more. Jin works on his and his father’s relationship, despite his father being unable to contribute to its repair. He attempts to decipher his father through his journal, and it is through this effort that Jin begins a dialogue with a man he hasn’t spoken to in years.

Jin tries to interpret his father’s written words, including why architecture was so important to him, actively seeking a better understanding of the man who raised him and drove him out of the country. He becomes frustrated by his inability to understand his father’s notes and drawings, and relates this frustration to Casey, who then must defend his father’s writing. Jin is so overwhelmed by his traumatic relationship with his father that an outside party must reason with him that his father probably didn’t expect anyone to read his notes, let alone understand what they mean. Casey’s reasoning that intent may not match impact is powerful in its illumination of how and why parents do and say things that are hurtful.

Casey’s mother begins a new relationship, and Casey is alerted to this fact through her mother’s actions. Casey describes a time in her life when her mother was not so motherly, the root of the problem being her mother’s poor taste in men and tendency to enter into unhealthy relationships. When Casey was younger, she was the one who had to pick her mother up off of the floor – she had to take care of her mother instead of enjoying her youth. She had to ignore her passions in favor of taking care of her mother, creating a stable home for them both. When Casey figures out that her mother is dating someone new, her frustration is apparent. She’s unable to sit still – dancing, grunting, her trauma painfully communicated. Casey is unable to hold in her feelings, realizing that the negative cycle her mother is stuck in may never stop. She’s trapped by obligation and codependency.

As Casey moves through the film, she spends less and less time with her mother, spending time with Jin instead. She’s able to find a friend in Jin and communicate her complicated feelings that she once thought no one would understand. As she’s prompted to explore her passion for architecture, a physical distance forms with her mother. Despite the closeness she gains with Jin, she is unable to sympathize with his need for distance, so thoroughly accustomed to her codependent ways. She learns over time, however, through advice from others and what seems to be an inability to remain in her mother’s destructive cycle, that she may need to follow Jin’s lead and seek distance.

At the end of the film, Jin and Casey trade places. It is Jin who must stay and take care of his father, as Casey once did for her mother. He makes this decision with no expectations, hedging his bets on what could be a negative outcome – paralleling Casey’s codependence with her mother. Casey, on the other hand, decides to leave and follow her dream instead of staying to pick her mother up off of the floor when her next relationship crumbles. Their parting scene is heart-wrenching, but also expresses how deeply Casey was trapped by her love for her mother despite their unhealthy relationship.

Casey is unable to fully part with the role of caretaker in this moment, asking Jin to check in on her mother, attempting to track her mother’s progress. Due to this request, Casey’s departure becomes uncertain, as it is implied that she may return if her mother begins to decline, instead of committing herself to her future. Despite this, Casey’s departure remains hopeful – there is hope that through distance, Casey can heal and change, and learn not to depend on her mother’s presence so strongly. Jin is hopeful as well, hoping to repair his relationship with his father on some level, even if it’s simply staying with him through his final moments.

Trauma does not simply go away, and both Casey and Jin will undoubtedly experience its effects for the rest of their lives. But – and this is a big one – they show that healing trauma can take many forms, and recovery looks different for everyone. Columbus requires us to understand that no two traumas are alike, and that, maybe, recovery is possible.