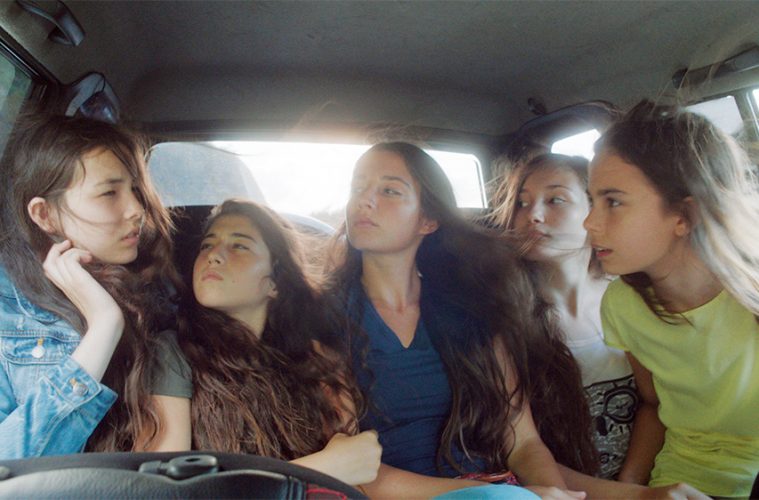 The Sacred of Sisterhood in ‘Mustang’

Someone once told me that Mustang (2015) is like the Turkish version of Sofia Coppola’s The Virgin Suicides (1999), but I think that comparison does Mustang a great disservice. Mustang captures a short moment in the lives of five adolescent orphaned sisters. Raised by their grandmother, and less so by their uncle Erol, the film’s events take place when their guardians believe them to be out of control. When their family perceives the sisters’ sexualities as exceeding their bounds, they start to marry them off chronologically. Therein lies the true tragedy of Mustang. Five sisters, loyal only to each other, separated by forces beyond their control.

Sonay, Selma, and Ece are the eldest. Sonay and Selma go first. Sonay to her love, Elkin (the boy of her choice), and Selma to a boy whose family takes her to the doctor after their wedding night because she doesn’t bleed after losing her virginity. Ece is next. She starts to get reckless. One morning when Erol has gone into the bank, Ece, Nur, and Lale – the three youngest – are instructed to stay in the car. Nur and Lale get out. Ece hooks up with a boy in the back of the car while her uncle is gone; her sisters cover for her. Within days, Ece is dead. Following the scene of Ece’s funeral, there is a familiar shot of the sisters laying together, limbs intertwined. The shot is uncanny, though, because it does not include Ece. All five sisters would never be together again.

Over the course of the film, the sisters’ situation becomes more and more fraught. After their first blunder, things get more strict. Anything that can pervert them has to go. This includes but is not limited to: makeup, computers, and cell phones. After their next blunder, gates are installed. The blunder after that leads to bars on the windows. But while Mustang is full of punishment, it is also full of joy. The love and care between these sisters is unlimited. They pretend to swim without water, they make chewing gum, they sneak out together to see soccer matches, they enjoy each other’s company.

The film’s focal point is the youngest sister, Lale, who we hear in the voiceover narration. Lale is determined. When her two elder sisters leave after they are married, she desperately wants to learn how to drive. She sits in her uncle’s car but cannot get it to move. She stumbles upon Selma, who is crying during her wedding. She tells Selma she doesn’t need to marry Osman, that she can run away to Istanbul. Selma tells her she can’t drive. Lale befriends a man, Yasin, who teaches her how to drive. After Ece’s death and before Nur’s marriage, the sisters plot their escape. On the night of Nur’s wedding, Lale locks out the guests. Nur and Lale take their uncle’s keys, money, family photographs, and food for the wedding, and run away. At the film’s end, only Nur and Lale remain together. Lale tenderly remembers all five of her sisters, together, wind blowing in the back of Yasin’s truck under the sunshine.

To compare Mustang to The Virgin Suicides is to ignore its positionality. The Virgin Suicides is a fetishistic look at the lives of five beautiful blonde sisters who only exist in the minds of teenage boys, whereas Mustang is about five lovely sisters who narrate their own story. Mustang does not seek to romanticize these girls, nor does it seek to villainize them. Instead, it captures the tragedy of their lives: their separation from each other. Sisterhood is truly sacred in Mustang as the love of their sisters is all these girls have ever known. The only certainty in the lives of these five girls was one another. This fact makes watching Mustang deeply sorrowful. We witness for a brief moment the care between these sisters, their only family.