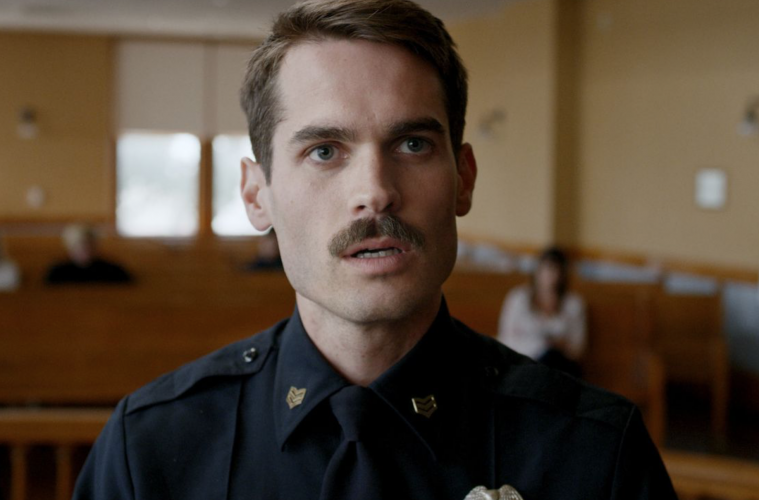 Review: ‘Thunder Road’ Is a Triumphant Vignette of Grief

“Everyone grieves differently. Everyone’s unique. There’s no right way or wrong way.” We are reminded of this as a long, single shot introduces us to Jim Arnaud. It remains unbroken, narrowing in on our protagonist as he delivers the eulogy at his mother’s funeral. In these minutes, we are introduced to a man on the verge of a nervous breakdown, troubled with anger issues, and unable to articulate his emotions. With his police uniform and stereotypical cop moustache, Arnaud speaks of his childhood, expresses regrets over how he treated his mother when she was alive. When those emotions build up, he dismisses them by bringing up his masculinity, calling himself “John Wayne” and stating, “I’m a grown man.” Despite all the vulnerability behind his angry façade, he feels, as a man, that he can’t be vulnerable. He brings along with him his daughter’s pink boombox as he speaks of his mother’s favourite song, “Thunder Road” by Bruce Springsteen. But when the boombox refuses to play, so begins a moment of catharsis as he performs an interpretative dance without any music. The scene, at the end of this stunning long take, kick-starts a character study that will make you laugh, cringe, and cry.

The angry cop trope is nothing new, and has garnered controversy only recently (*coughs* Three Billboards *coughs*). It’s a prevalent topic in our social climate, but Arnaud isn’t a character that should be aligned with it. He’s angry, yes, and could be considered an anti-hero, but his self-sabotage and the pressure he puts on himself is all to become a better person – for himself and for his daughter.

Writer, director, and star, Jim Cummings, has achieved something remarkable with his debut feature. Thunder Road is a vignette of a man unable to fully cope with the grief of losing his mother, along with the stress of dealing with his ex-wife who wants sole custody of their daughter. Arnaud is a man attempting to hold onto his pride, hold onto what remains, and the film is about the unfortunate decisions he makes to do so. On a patrol one night, he picks up a teenage girl who is having a little too much fun in the backseat of a car with two guys. Arnaud asks her if she stays out of trouble. When she replies with, “I try, but trouble always seems to find me,” the camera pans to Arnaud with an expression on his face that suggests that this is also true for him.

Thunder Road is a film that somehow manages to make you laugh, despite the central character’s world falling apart. But for each laugh, there are equal part tears. Arnaud is a man with no filter and no control over his anger, so when he goes out of control and starts fighting with a drunken man while on patrol, it’s darkly hilarious. Especially in the ways he expresses himself and apologizes to his superior. It’s a tone that shouldn’t work, but Cummings somehow provides a perfect mixture of comedy and drama.

Despite his faults, Arnaud is loveable, especially when you get to see how much he loves his daughter, finding ways to bond with her through practicing the hand slap game she loves. He also helps her deal with preteen insecurities, telling her that she doesn’t need to wear a full face of makeup to prove she’s beautiful. The dialogue in these interactions is heartfelt and natural, and Kendal Farr’s youthful vibrancy and humour as Crystal put her on par with young talents like The Florida Project’s Brooklynn Prince and Eighth Grade’s Elsie Fisher.

Cummings turned his acclaimed short film into a fully fleshed-out feature that you can tell is a passion project. He proves that he is a filmmaker and director to watch with this humanistic story that will make you laugh and cry until it hurts. And his performance is nothing short of astounding; certainly, one of the best of the year, with his monologue towards the end of the film leaving you particularly breathless. It’s a raw, emotional plea for help as he lets out all of his pain. He talks about how he wishes he’d get hit with a cement truck, which isn’t far from what the audience feels.