Review: ‘Keep Me Posted’ is An Honest Web Series That Lacks Substance

Web series have become a legitimate medium with success stories like Broad City and High Maintenance, but with their small casts and smaller budgets, it’s essential that the characters be relatable, the dialogue impeccable, and the editing air-tight. And for every Ilana and Abbi, there’s a slew of other characters who are far from household names. Written and directed by Hillary Berkowitz Nussbaum, Keep Me Posted is one such series that follows Becca (Kim Blanck), Ali (Terra Mackintosh), and Kavita (Maya Deshmukh) – three best friends trying to hack it in – where else? – New York City.

Created by an all-female team and in partnership with Pitch Her Productions, the show should be applauded for supporting women in front of and behind the camera. That being said, the plot is largely uninspired, and while each of the three episodes is only 20 minutes long, I found myself distractedly checking my phone. Keep Me Posted is billed as a comedy, and though there were scenes clearly meant to garner laughs, like daydream sequences and flashbacks, they were oddly edited, making it difficult to tell which were daydreams and which were grounded in reality.

The city, too, is sadly lackluster when compared to other female-centric shows set in New York. I think of Broad City and its love for the wacky, gross, and unloved parts of the city; Girls with its hard-on for affluent Brooklyn; Sex and the City’s obsession with Midtown. Depicted without any real depth or warmth, I didn’t recognize Keep Me Posted’s New York at all.

Becca, Ali, and Kavita mainly interact over text, but their communication falls flat. Millennial women communicate sporadically and passionately, with humor and sarcasm. There are GIFs, inside jokes, and pop culture references. I went through a phase where I only texted my friends with emojis, spending arguably too much time scrolling through images until I’d strung together some semblance of a story. I often send and receive links to songs on Spotify, and my husband and I text each other funny tweets or articles we see throughout the day.

None of the above make an appearance here. Before Kavita’s first day at a new job, she takes a duck face selfie and texts it to Ali and Becca, asking, “Hot shit or hot mess?” And to that I must say: Duck face? In this economy?! Becca, on the other hand, is part of writer Twitter. Her Twitter handle is @beccauseisaidso, which is solid, but her tweets are generic and filled with hashtags. Here’s one she shoots off as she’s suffering from writer’s block: “‘How to write: Butt in chair.’ @Annelamott #motivationmonday.” Then someone tweets back at her, “My fave writing quote. So true. #amwriting.” 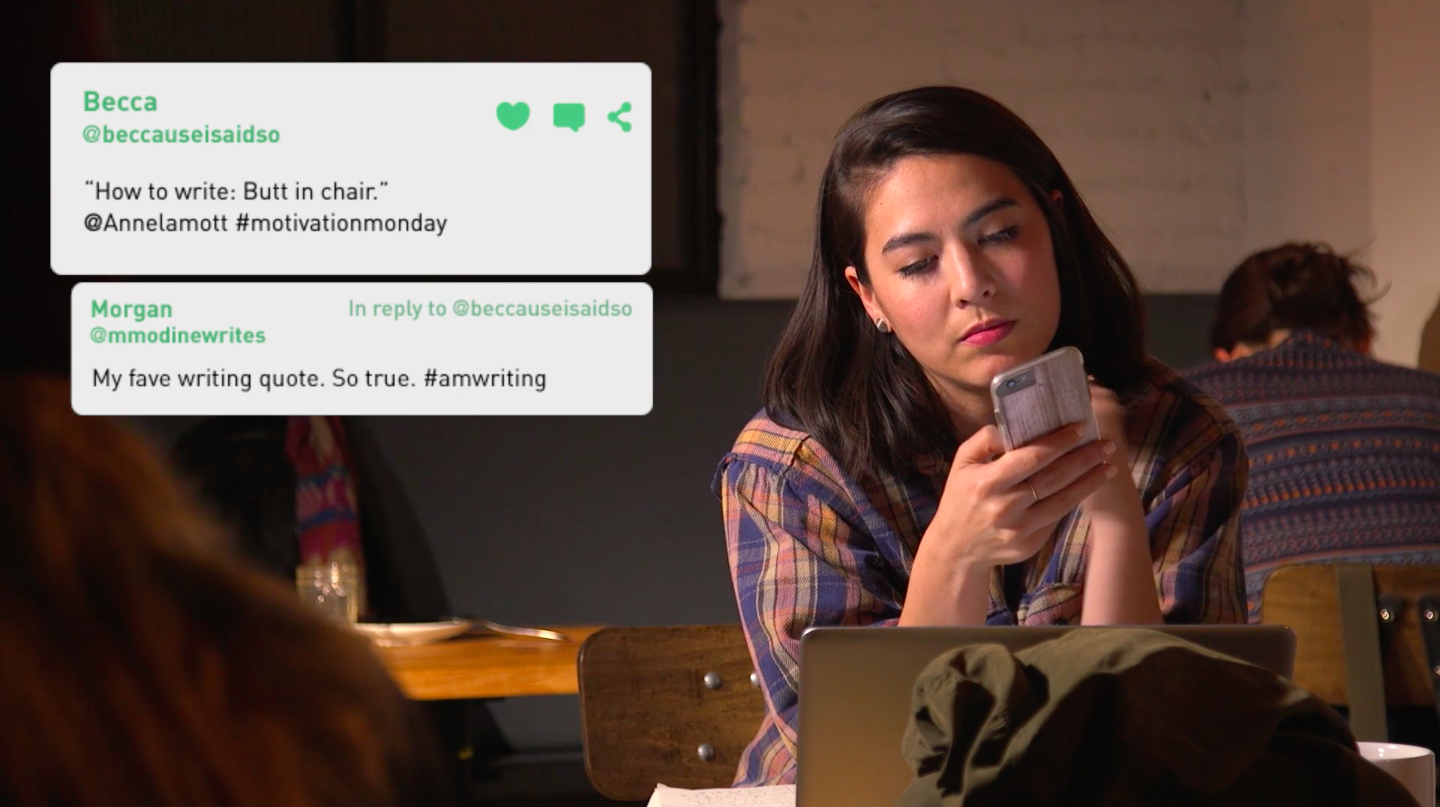 And although the three are supposed to be thick as thieves, it’s unclear how they became close – except that Kavita and Becca are childhood friends. Ali seems to be the Marnie of the group, as the girl with the color-coded calendar who just moved in with her fiancé, Aaron. Her main role in the triad seems to be texting Becca and Kavita to compliment them on Instagrams they just posted. She often acts as the mediator between her two more expressive friends, all the while secretly freaking out about her upcoming nuptials.

Kavita is a bit of a mystery for me. We learn that she’s from New Jersey but recently moved to the city (and in with Becca) to start a new job as a social media manager. She is enamored by New York and has a list of places she wants to go, including an expensive brunch place called Saxe and Sons. But I don’t buy that New York would be a sepia-toned city of dreams to someone who grew up just across the Hudson.

Speaking of the Garden State, Kavita’s hovering-but-well-meaning mom, Preethi (Ayiesha Alizai Sadik), keeps trying to set her up with boys, even after she moves out, and always wants to know how her day went. Kavita clearly feels smothered, but it came across as so sweet to me. Maya Deshmukh, who is the best actress of the bunch, is not given a lot to do – often sitting on the couch with a blanket thrown over her legs, watching reality TV. What she first thinks is cabin fever from living at home soon evolves into deep depression after moving area codes doesn’t lift her mood. Becca promises Kavita that she will ask her mom for a therapist referral (her mom’s profession is unknown, but I would assume it’s healthcare-related), which is a good start but hardly groundbreaking. What could have been a valid and important storyline about mental health became flimsy and largely unresolved in its execution.

Becca, meanwhile, is deep in the trenches of writer’s block. In an attempt to write a book after being laid off, she begins frequenting a neighborhood coffee shop, where she meets a hot barista named Cal (Washington Kirk). She immediately texts her friends that he has a real artist vibe, to which Kavita responds, “OMG, that is such a meet-cute. Real life NYC rom-com!” But when they go on a date, Becca concludes that he has no personality (although he is Jim Carrey next to her). For some reason, she keeps dating him, and the ice between them eventually thaws in a nice scene on a park bench, where they discuss Becca’s career. She says that her main writing accomplishments were in college, implying that she hasn’t done much since. “It used to be so fun,” she laments. “Moving words around like puzzle pieces, shaping them. Now I can’t even start.”

Uncertainty dictates every decision these women make, and it continues into the series’ final moments. Becca, in an all-night frenzy, completes an article for an online publication. It’s an achievement – albeit a small one – and yet the future is still hazy. “Do you ever feel like you’re disappointing your childhood self?” Becca asks Kavita as they sit on their couch. “I just can’t shake the idea that I’m letting her down.” Like so many women in their twenties, all three of them feel trapped – by their careers (or lack thereof), their relationships, their depression. It’s an honest sentiment that many women feel, and it rang true. But despite its quick glimpses of relatability, Keep Me Posted isn’t compelling enough for my taste. I’d watch a Preethi spin-off, though.