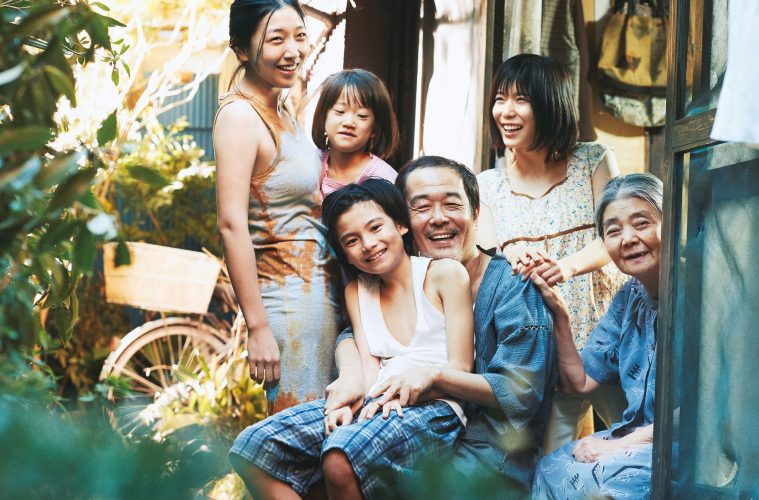 Review: ‘Shoplifters’ is a Multilayered Discussion of Poverty and Survival

In Shoplifters, Hirokazu Kore-eda produces an emotional film that transports the audience into the confines of a claustrophobic, cluttered atmosphere; brimming with warmth as he introduces a family of loveable criminals. In this little shack on the edges of society live Osamu (Lily Franky), his wife Nobuyo (Sakura Andô), her sister Aki (Mayu Matsuoka), grandmother Hatsue (Kirin Kiki), and son Shota (Jyo Kairi). Money is a prevalent theme in this household – there’s never enough.

Osamu gets occasional work in construction, but when he loses his job due to injury, the family must rely on the money Nobuyo brings home from her factory job. When she is laid off, all they have left is Hatsue’s pension. In the midst of all of this, Aki makes little as she works in a strip club. They are living in poverty, struggling to survive. In order to get by, Osamu teaches his son Shota to shoplift, which becomes a daily ritual, as they steal food, clothing, shampoo, and so on. One day, after a spree of thievery, they discover Yuri (Miyu Sasaki), a little girl playing outside in the cold. Osamu takes her home, and they soon learn that she is being subjected to daily abuse by her parents. Despite their poverty, they take Yuri in as their own, and because of her circumstances, they view themselves as saviours, not kidnappers.

The film is small and the script subtle, but it’s contemplative and loud as it explores these complex characters, their relationships, and their development. Mystery surrounds this family, as their real dynamic isn’t properly explained until the end. But the intrigue and investment in their family life never dims, even as the revelations build up and hit you like a ton of bricks. Despite the characters’ immoral actions, Kore-eda brings a great amount of humanity and empathy to a narrative that, if executed by a more conventional filmmaker, would be lacking. The consequences that ensue as a result of the actions taken by our protagonists aren’t sugar-coated by the filmmaker, but Kore-eda allows the audience to reflect on societal values generally speaking, and to consider their circumstances without judgment.

The cinematography is simplistic but beautifully displays Japanese life and surroundings, told from the perspective of the most vulnerable. The film, at its core, is a discussion of classism, capitalism, and the human condition. It’s multilayered as it explores poverty, parentage, and aging. We see this family at the bottom of the totem pole, struggling to survive with capitalism crushing them, as they are without any middle-class comforts. Kore-eda, through his storytelling, brings forth a visual representation of the disappearance of the middle class and growing economic inequality.

Kore-eda asks many things: What will people choose to sacrifice when faced with adversity? What makes a family a family? What makes a parent a parent? These are all powerful questions that the filmmaker tackles with ease. With the family’s informal adoption of Yuri, Kore-eda demonstrates that family is not constrained by blood. The beautiful bond that the family and Yuri form with each other makes the audience fall in love with this family of shoplifters as their life slowly falls apart.