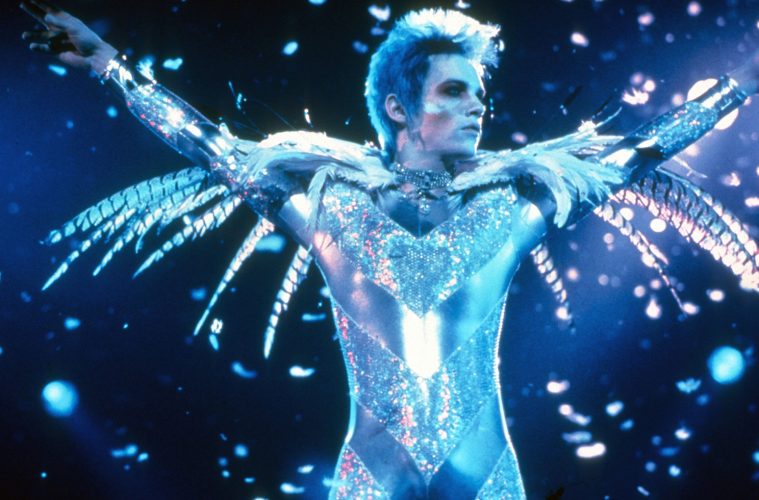 In the second semester of my Master’s program, I greeted one of my professors in tears. The only out queer professor in the department, I told him, “I want to feel close to my queer elders.” What I meant was that I wanted to feel intimacy with, to feel in proximity to, to find, queer folks in the mediums I care about. Or maybe even, I wanted to feel a history, my history. But how do you feel close to a body, to a person, that you cannot touch or do not know?

Not too long ago, I watched Todd Haynes’s delightful Velvet Goldmine (1998) for the first time with two of my closest friends. My friend Erin told me, “It’s like Todd Haynes got funding to make his fanfiction,” and she is so right.

Velvet Goldmine is the ecstatic, difficult, daring imagining of Brian Slade – a fictional figure standing in for David Bowie, glam rocker and superstar. The film is set up through four – or maybe five – independent, but very much linked, timelines. Each timeline interacts with one – or maybe two – queer men.

The film opens with a shot of a star-filled sky. A spaceship moves through the Dublin cityscape before delivering a baby with a gorgeous emerald brooch to a doorstep. That baby is Oscar Wilde, the Irish playwright who famously served two years of hard labour for having sexual relationships with men. A narrator says, “Histories, like ancient ruins, are the fictions of empires.” In primary school, a young Wilde tells his teacher and his peers, “I want to be a pop icon.”

One hundred years later, on a British playground, a young boy named Jack Fairy is beaten up by a gaggle of his peers. When the crowd disperses, he is left face-down in the dirt. Rubbing his hands in the soil, he unearths the emerald amulet, which passes from Fairy to Slade to Wild to Arthur over the course of the film. The narrator dictates, “Until one mysterious day, when Jack would discover that somewhere there were others… quite like him.” Fairy looks in the mirror, washed out in the pale blue light of the night outside his window and, from an open wound left from the beating, smears blood across his mouth – now glorious, sparkly red lipstick.

A few decades later, in the early 1970s, a group of teens run through the streets of London towards a concert hall, passing a discreet Jack Fairy on the way. Arthur Stuart is among them, dressed era-appropriately. While Stuart runs through the streets, Slade dresses backstage. Blue wig, metallic makeup, silver sequined jumpsuit – skintight and adorned with feathers. Slade’s dressing room is tense; rumours have been floating around that he’s in danger of being shot onstage. And the rumours prove true. Through the chaos, after the bullet is fired, time slows and Stuart gazes at the stage. Non-diegetically, he yells, “Brian!” with urgency and familiarity.

Ten years later, coming up on the ten-year anniversary of Slade’s “death” – which later turns out to be a hoax – Stuart is charged with writing his story, to investigate what really happened to Slade, because he “remembers.” Memory is the essential means through which these figures become connected. Throughout the film, there is a question of whether or not Stuart slept with Slade’s musical peer and lover, Curt Wild, and whether or not the entire story, refracted through memory, is ‘real.’ However, whether the story is ‘real’ or not is inconsequential.

Although these men – especially Oscar Wilde – are separated by distance, geographically and temporally, they are nonetheless related to one another. The film connects them through ephemeral traces: an amulet, a common identity, a passing on the street or on the descent into the subway. By doing so, it builds a community, builds a world, in and through an archive of memory.

The late José Muñoz wrote, “The presentation of this sort of anecdotal and ephemeral evidence grants entrance and access to those who have been locked out of official histories and, for that matter, ‘material reality’” (9). Often, as queer folks, all we have is memory. As our histories have not been preserved, we’re dependent on stories, accounts, retellings, and testimonies of those in our communities. We have been barred from a history, not to mention History.

And often, when we do know our histories, they are inflected by trauma. Stuart interviews Slade’s old manager in a hospice. Although it is never made explicit, spectators can assume – knowing that this timeline occurs in the early 1980s – that he is HIV-positive. He recounts Slade and Wild’s first meeting. After a festival where, maybe Slade didn’t exactly bomb but the audience definitely wasn’t into it, he is followed by Wild. Erratic, electric, and deeply performative in a kind of careless way, Wild throws glitter, pulls down his pants, and jumps around with his penis out. Slade stares from beyond the crowd with his wife and manager, mesmerized. The potential ontological story for Wild’s stage presence is electric shock therapy. After finding out he was queer, Wild’s parents sent him to conversion therapy to “fry the fairy clean out of him. But all it did was make him bonkers… every time he heard electric guitar.” Needless to say, it did not work, as Slade and Wild become lovers shortly after meeting.

As Slade is based loosely off of David Bowie, Curt Wild is based off of a combination of Mick Jagger and Lou Reed. It is true that as a child experiencing “homosexual tendencies,” Reed himself was subjected to shock therapy. And this is something that Velvet Goldmine takes very seriously. Although the story is told flippantly by one of Slade’s previous managers, it seriously considers the ways that trauma can reverberate through our relationships. Although we long to find each other, that does not mean that when we do, everything will be easy, happy, lovely, amazing. Being in relation with others is always messy and it is especially messy when we have never been taught how to do it. Slade and Wild share a relationship that’s both loving and volatile.

Velvet Goldmine’s archival practice – a practice of historiography – builds a community that never directly touches each other. It shows us how we can feel intimate with bodies we may never come into contact with. Whether or not Arthur ever met Wild, let alone had sex with him, is not of concern. What is of concern are the intimate bonds forged through memory – or complete fiction – to create a structure of belonging.

Aside from the very obvious language of imperialism, Velvet Goldmine, I think, is set up to give spectators a glimpse of this ephemera. Kind of like ghosts, ephemera presents itself but never fully. It can be fleeting or disappearing before our eyes. We could reach our fingers out but never catch it. It serves as a record of history outside of where we usually find it – the library, the archive, the university, the state. The film allows spectators to catch a peek of this ephemera that appears like momentary evidence, indexing a history of lives, worlds, people we may never see. Histories, the narrator speaks, like ancient ruins – like those buildings that will never be whole again, never as they first were – are the fictions of empires; in this case, the empire of a queer glam rocker and a music scene past.