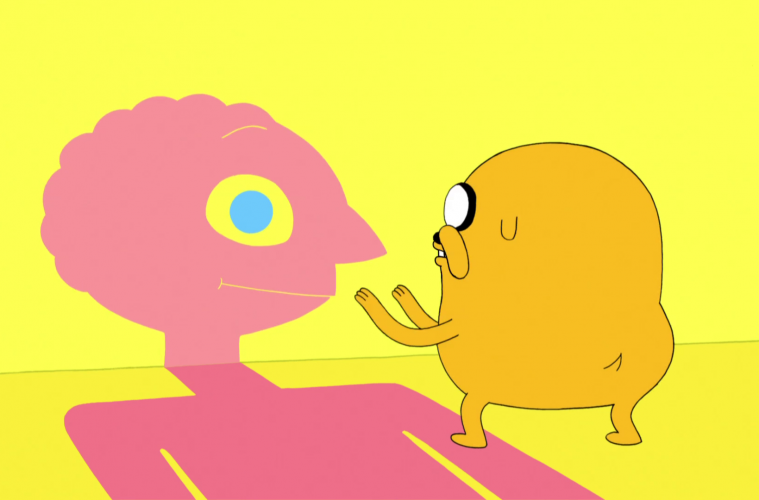 Reinvention and Transformation in ‘Adventure Time’

My favourite aspect of animation is its ability to transform bodies into all shapes, sizes, colours, and textures. Because animation is completely unbounded from reality, it can essentially do whatever it wants. (Why, then, animation typically represents reality mimetically is another question for another day). Adventure Time presents a hermetically sealed world – the land of Ooo. Because of this, the stretching, changing, malleable bodies of its characters, especially Jake the Dog, make total sense to the viewer. For this piece, I’d like to focus on Prismo the Wish Master – my favourite character, voiced by The Big Sick’s Kumail Nanjiani – and Jake the Dog, examining their homoromantic, potentially erotic relationship.

Prismo, a shadowy pink figure dreamt up by an elderly brown man, appears for the first time in the first episode of the fifth season, “Finn the Human.” From Prismo’s first appearance in the series, there is a homoromantic relationship between him and Jake. I will take as my case study the first episode of the sixth season, “Wake Up.” Taking place in Prismo’s Time Room, a party happens wherein many quirky and loveable guests, as well as some more unsavoury characters, congregate. In the unsavoury category is the Lich, described as a “powerful undead being and the overall main antagonist” of the show. Jake, a lover of food, eats cheese crackers until they run out. In a panic, he runs over to Prismo to inform him that the cheese crackers are gone. Prismo kindly “musters” some new cheese crackers for Jake, as since he is a Wish Master, he can do that. Jake thanks him, saying, “Prismo! You make me happy, Prismo.” Prismo blushes and replies, “Oh, stop,” to which Jake responds, “I’m always smiling around you! I just noticed that. I always am.” Prismo mirrors back, “I’m always smiling when I’m around you, too.” Jake giggles like a schoolgirl and finishes, “Feels so good!”

Although this may seem benign, exchanges like this – which happen frequently on Adventure Time – give pleasure to me as a viewer because of the way romantic relationships between same-gendered characters are coded as queer. It is relatively uncommon to see affectionate exchanges between male characters on screen. Although the relationship between Prismo and Jake is not specifically romantic, the subtext is that there is a sweet, tender tone that disrupts the typical unemotional relationships canonically seen between men.

When Jake returns home from Prismo’s party, he finds Finn lying in bed awake. Finn tells Jake that he has discovered that his human dad is still alive and in a place called the Citadel. After Finn was abandoned in a forest as a baby, he and Jake were raised by Jake’s parents, two dogs who worked as private eyes. Finn and Jake go back and forth on whether or not Finn should seek out his human father. Jake persuades him saying, “But it might be good to find out if you got any genetic risk factors or allergies or whatever” (another reason I appreciate Adventure Time is that it treats children like people), and Finn agrees to go. Jake thinks the best way to get to the Citadel is to ask Prismo to grant them a wish. Jake pulls out a note that reads, “If you want to come back and hang out sometimes. Call me. – P.” This lovely, magical note allows Jake to return to Prismo’s Time Room anytime by pressing the “P.”

Upon their return to Prismo’s Time Room, Prismo explains that the Citadel is a “nastisized prison” where only “real stink faces” go. He dissuades them from going but ultimately helps them get there. Prismo tells Finn and Jake that the only way to get to the Citadel is to commit a “cosmic crime.” He tells them to go find a “certain sleeping old man” and bring him back to the Time Room without waking him up. Once Finn and Jake return with the sleeping man, Prismo explains that he is just the manifestation of the old man’s dream, and that when the old man is woken up, he will disappear. He concludes that killing a Wish Master is a “cosmic crime” and they will be taken to the Citadel.

Jake is extremely hesitant to let Prismo sacrifice himself in such a grandiose way for them. Finn echoes his hesitance. Before they can decide whether or not to wake up the old man, the Lich comes out of his frozen state and tells ‘Old Man Prismo’ to “wake up.” Prismo begins to disappear and calls out, “Wait! I change my mind!” Jake springs into action and calls back, “Don’t worry, Prismo, I’ll put the old man back to sleep and get you back.” Angrily, Jake’s body transforms into a muscly, human form, keeping his facial features and yellow colour. Through these transformations, Jake never loses his essential being. Jake finishes by yelling, “Lich! I’m going to kill you.” Jake’s endearing act of loyalty and extreme display of emotion point towards the homoromantic and tender nature of his relationship with Prismo. Their friendship is soft and sweet, and therefore queered in a way relationships between male characters typically are not.

As the Citadel’s guard comes to retrieve The Lich for killing Prismo, Finn jumps in to yell, “I’m coming, Daddyyyyyyy.” Adventure Time attempts to create a heteronormative family redemption arc. In the next episode, “Escape From the Citadel,” Finn strives to meet his human father. Finn speculates about whether his father is a guard or a warden of the prison. When Jake points out a man encapsulated by a crystal who resembles Finn, Finn runs towards the man exclaiming, “Daddyyyyyyy” again. Finn asks Jake if he thinks his father could be a criminal. Jake replies that he had thought about the possibility. Finn sighs, “Now my heart feels yellow and green.” 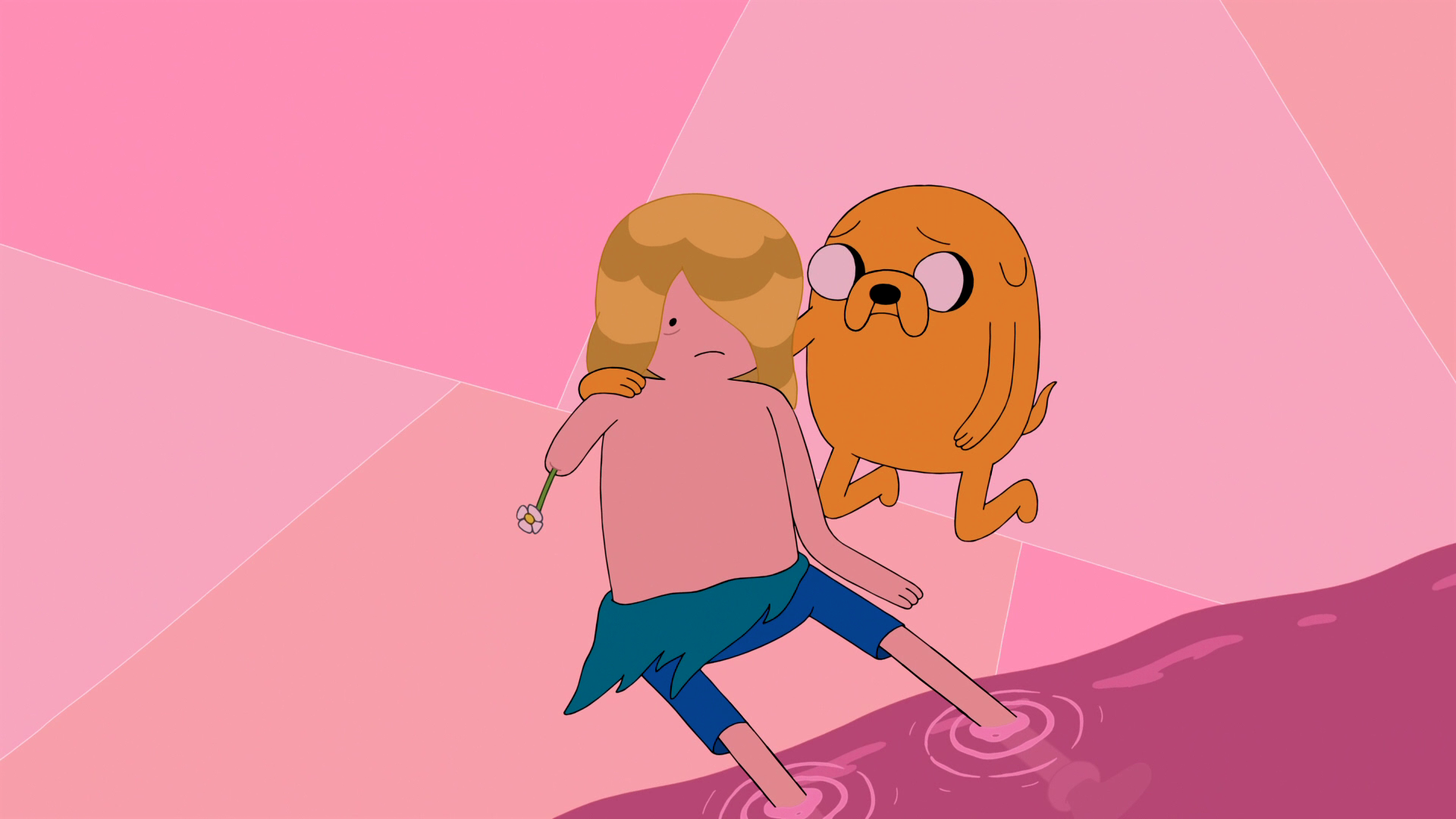 The Lich melts all of the crystals holding the prisoners and kills the guards of the prison. When Finn’s father sees Finn and Jake, he does not recognize Finn; he only asks for them to help free him. Abruptly, Jake says, “Also Finn is your son,” which Martin, Finn’s dad, ignores. When Jake repeats himself, Martin replies, “Son, hey, good for you, kid. In other news, I still gotta get out of here.” Finn follows his father and continually attempts to ask him questions but is frequently interrupted by the chaos as well as Martin’s trying to escape. After Martin gets some skin on his leg burnt off, he enlists and manipulates the vulnerable Finn into helping him, saying, “Your old man needs you,” and winking. He continues by yelling, “That’a boy, Flynn! Do it for your old man,” saying his son’s name incorrectly.

When Finn finally gets the chance, he bursts out quickly, “Why’d you abandon me in the forest when I was a little baby?” Martin replies, “You know me – I’m a funny guy… I don’t know. It was a long time ago, who knows? Maybe you left me… but, hey, Daddy’s back – you and me, daddy and baby.” Even after Finn helps repair Martin’s leg, when Jake and Finn turn their backs to survey the situation, Martin takes off, yelling in classical bad dad fashion, “I gotta run to the store!” Finn is determined to not let Martin escape, but he ultimately does. Finn loses part of an arm, which is replaced by a flower. Subsequently, Finn falls into a deep depression, which is discussed at length until his arm grows back later in the season, during an episode called “Breezy” (my personal favourite).

Although it may seem at first that Adventure Time is attempting to convalesce the typical heteronormative family redemption arc, this episode points to the importance of chosen families – a type of kinship that queer people have been known to create. Families that are not related by blood but instead are related through mutual love and care. Although Finn attempts to discover his human family again, he is ultimately left with only his ‘brother’ Jake in their shared treehouse. Adventure Time frequently reinvents the boundaries of love and care between same-gendered characters, as well as typical social dynamics. The show’s tender and kind nature towards its characters and their relationships fills me with so, so much joy and love that I do not think this essay could possibly do it justice.

Throughout “Escape From the Citadel,” Jake’s body transforms on five separate occasions. It takes the shape of staircases, slides, a ball on a chain, and a lasso. The transformations – or reinventions (*Ron Howard voice* Hey! That’s the name of this issue!) – of his body fit the unique demands of the situation, catching Finn and making mobility easier. The world of Adventure Time is predicated on the unique shape-shifting capabilities of animation, which I think can always already be read as innately queer.

None of the changes to Jake’s body change him to us as spectators. Temporally, there is no gap between Jake’s body as a lasso or a staircase and Jake’s body as a yellow dog. His transformative power doesn’t bewilder or confuse us. The reinventions of his body are completely coherent.

Jake’s body coherently shifts from its dog form to that of inanimate objects. There is a naturalness to these changes. He is always characterized by the same colour, the same voice, and the same personality. This is to say, even when his body is shaped as a staircase, it’s clear that it’s Jake. He always returns to his original state as a small yellow dog. His end is then also his beginning. In this way, his transformations can be seen as seamless and natural. Jake’s coherence is in his incoherence. As spectators, we are aware that Jake is a magical dog whose body can take on new forms at any moment. It is through this recognition of incoherence that Jake cultivates his coherence, which serves to normalize his ever-shifting body to the audience. Moreover, I think this conception of morphing lends itself to my queer reading of the series. Like morphing, queerness is slippery. It has the potential to reshape, transform, and even disrupt or reinvent the typical heteronormative order. Morphing has the potential to disrupt and re-order in the world of the animation. I argue that in this way, morphing has a hand in allowing queer characters to exist. As morphing becomes naturalized, so too does queerness.

The reinvention of the bodies of Adventure Time’s characters always lends itself to novel identities and relationships in ways that are slippery and hard to track. This always gives me (and I assume other spectators) kind, tender, loving, caring, soft feelings. Reinvention in Adventure Time is inherently queer, as it is in my life as well.