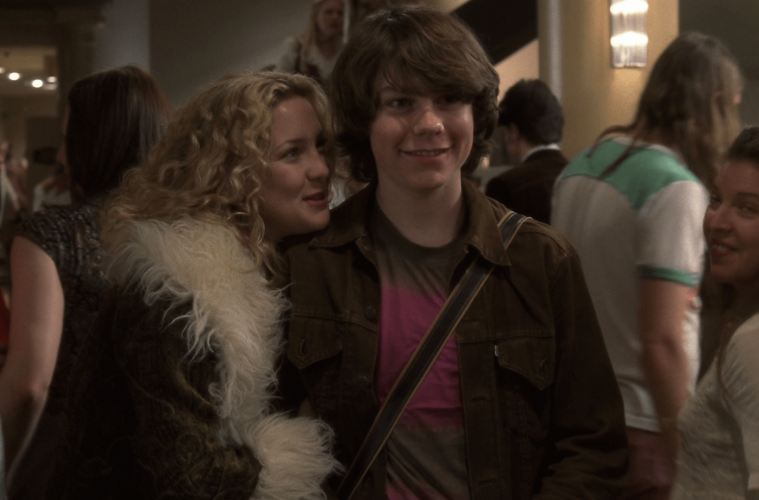 The Anxieties of Authenticity and Reinvention in ‘Almost Famous’

The concept of reinvention in the service of fame is often at odds with the rock and roll genre’s dedication to authenticity. Reinvention implies a conscious change that is made of deliberate choices – innocuous enough, until paired with the ideology surrounding authenticity. Authenticity implies that choices didn’t have to be made because nothing had to be “decided on.” Nothing has to change. What you see is what you get, and it has always been this way.

To stay true to your art, you are asked to remain as you are, but to be successful, you might be asked to change yourself to fit the role of a marketable rock star. So, authenticity is almost fetishized in creative fields – especially in music, where inauthenticity could mark you as a poser, or worse, a sellout. If you overcorrect in the act of reinvention, you may accidentally stray into the badlands reserved for such con artists and become so removed from the art that you may as well not be an artist at all.

Reinvention is a particular anxiety for Stillwater, the fictional band of Almost Famous, as they start to gain a certain level of fame. The tension between the pressure to reinvent themselves to become a bigger band and to remain true to who they are as a band is one of the central conflicts of the film. This tension colors every relationship in the film, from the band’s relationship with an interloping fifteen-year-old rock journalist named William Miller (Patrick Fugit) who’s trying to cover this period in their music career, to – most importantly – that same William’s relationship with an enigmatic groupie named Penny Lane (Kate Hudson). As Stillwater’s guitarist, Russell (Billy Crudup), and lead singer, Jeff Bebe (Jason Lee), feud over the former’s usurping the latter as the band’s frontman – a position they had agreed on pre-fame – or whether to fire their longtime manager in favor of their record label’s sleazy but efficient choice (Jimmy Fallon), William and Penny Lane forge a complicated friendship that contains echoes of the band’s reinvention dilemma.

Penny Lane has reinvented herself off-screen; her off-the-road life is unknown to both the viewer and William, except for the fact that they share a hometown. Penny becomes an intriguing figure for William, someone between a friend and a guide. She helps him navigate his new role as a rock journalist using her expertise as a muse. To him, she represents the magic of rock and roll; she’s electric, whether she’s swooping into a hotel room and reciting the flight attendant’s safety instructions speech in French, or having an intimate conversation. She bonds with William almost instantly over their mutual lying about their age in order to seem older. When William reveals that he is not, as he originally told her, eighteen, she laughs: “Isn’t it funny? The truth just sounds different.”

Penny Lane is open about her reinvention without necessarily calling it one. She hints to William that the version of herself on tour is removed from who she used to be, repeatedly (but playfully) refusing to tell him her real name or her real age until she flits out of his life. Her evasiveness is part self-preservation; she already gives so much of her invented self to musicians like Russell as a lover and muse, and to her fellow Band-Aids as a teacher, so why should she be expected to do the same with William? But beyond self-preservation, Penny Lane seems to be proud of the new self she has created – the girl she has painstakingly brought to life through reinvention.

She insists that Russell is her last “project” as a muse. She realizes his potential as a musician and a star, and devotes herself to helping him realize it fully. But we see that she has kind of adopted William as another “project,” whether intentionally or not. She’s the film’s agent of reinvention in the sense that she is not trying to remake the people she works on, but rather is helping them dig deeper into their preexisting talents and bringing them to the forefront. 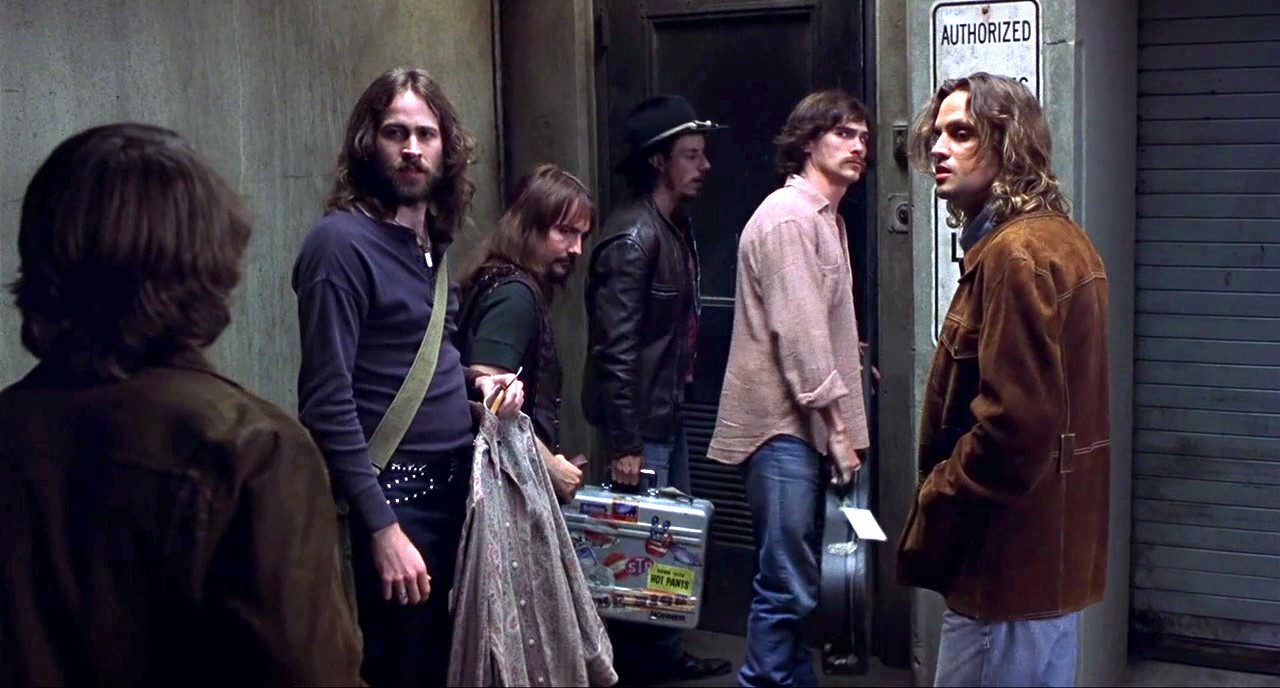 Maybe it is his journalistic instincts, his drive to parse out fact from fiction, or maybe it is his embarrassment at being held at arm’s length by Penny, but William has a difficult time accepting her at face value. He is not antagonistic, but his curiosity about her personal, non-Penny Lane life borders on invasive. He doesn’t see it as reinvention, or even revisionist, but concealment. If her art is being a muse and guide to musicians, why does she insist on being inauthentic around them? Unable to bridge this, William becomes irate and cruel, belittling Penny’s happy-go-lucky attitude as willful ignorance of reality. He tells her that Stillwater has effectively “traded” her and her friends in a card game. In this moment, he finally has the upper hand over Penny – inside information to which she was not privy. He is reinvented, twisted by his complicated feelings, in her image.

As Penny is kicked out of Stillwater’s inner circle, William finds himself more entrenched with them than ever. The power dynamic between the two completely flips, and we see Penny Lane with the filter of her reinvention removed. The refined, all-knowing air that surrounded her, making her seem like a sophisticated adult, is gone. In its place, Penny becomes a jealous, heartbroken sixteen-year-old.

Penny retreats to her hotel room, where she is staying under an assumed name, and William catches her before she overdoses on Quaaludes. After the incident, they walk through Central Park, and Penny finally reveals her true name, Lady Goodman. It has always played to me as one of the film’s sadder moments; Penny is haggard after her near-death experience and reveals the information that William has been after the whole film. This revelation is where the movie makes its case against reinvention. Is this not when she’s at her most true? Didn’t William earn Penny’s trust after he helped her when she overdosed?

Earlier in the movie, Russell and Jeff fight about who is the actual frontman of Stillwater. When they were starting out, they seemed to have mutually agreed that Jeff as the lead singer would be the face of the band, while Russell would be the guitarist with a mysterious allure. The roles had been defined and agreed upon. But in the face of their fame, the roles somehow got confused and lost in translation. Jeff’s resentment of Russell is not necessarily rooted in his unforeseen fame, but rather in the fact that Russell knows that the setup wasn’t what they had agreed upon but makes no effort to correct it – a willful resignation to a reinvention that changes their relationship and its power dynamics.

In a similar way, Penny and William had an unspoken power dynamic in their friendship, rooted in Penny’s reinvention from her “real” life as Lady Goodman. The film seems to argue that reinvention causes a rift in relationships that is extremely difficult to repair. The person who is reinvented – Russell as the Frontman or William as the Insider – holds more power over the other person in the relationship. Reinvention upsets the balance of the relationship almost irrevocably, and that relationship must also be reinvented to create a new balance.

Almost Famous has a complicated relationship with reinvention because the ethics of reinvention are just that – complicated. Ultimately, the movie posits that reinvention is not necessarily as bad as rock and roll ideology proclaims it to be. It isn’t necessarily on par with selling out or lying about yourself. Changes are unavoidable, especially when relationships (be they professional or not) are tested by outsider influence and shifting dynamics. Rather, Almost Famous has us examine the intention of reinvention. If done correctly, it brings us into a deeper understanding of who we are and what our place in the world is.