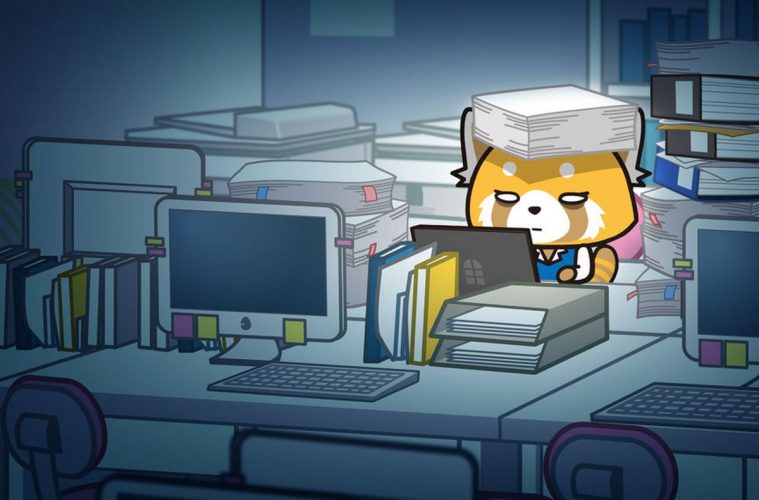 How ‘Aggretsuko’ Reimagines the Working Woman

If you know a sweet, responsible girl who seems somehow perfectly suited for office life, you might have met Retsuko. Well, probably not the real Retsuko – she’s an animated, talking red panda. However, you’ve definitely met one of the countless girls for whom Aggretsuko was written to strike a chord. So, you’ve met Retsuko, but in case you haven’t: she’s 25, single, a Scorpio, and her blood type is A. Oh, and she loves nothing more than to rock out to hardcore death metal.

Aggretsuko’s form skillfully mirrors its meaning. Much like Retsuko herself, the show’s strength is in its subversion. So, let’s talk first about what Aggretsuko is, on the surface. It’s cute. It’s funny. I’ll be the first to admit that it’s a little bit gimmicky. In the same deceptively analytical way as Disney, Sanrio has a godlike ability to personify things and animals and then evoke an intense sense of familiarity in you. It feels as though you’ve known Retsuko and her rambunctious crew forever. The second you lay your eyes on Gori and Washimi, an ostrich-gorilla power duo, you love them. However, this strength is also a downside. Audiences are quick to acclimatize to the clever and fresh idea of a beer-drinking, metal-loving, super-cute red panda, and waiting for Retsuko’s rage to fly free feels, at times, more like a dragging beat than a driving one.

At the end of the day, Aggretsuko boils down to a big win for Netflix. It’s elegantly executed in that its entertainment appeal comes down to only two concepts: timing and relatability. The series is short: there are 10 episodes of about 15 minutes each. It doesn’t have time to hit every single mark. We can tell by looking at Netflix’s little red bar at the bottom that we won’t delve into any heavy stuff. (Or will we?) By acknowledging this, Aggretsuko refuses to get bloated down by stuffing content into its short time slot. Instead, the lightweight form allows it to put forth the best execution of simple ideas.

So, what are those ideas? At the forefront, Aggretsuko is a fun story about a misguided worker bee looking for an easy way out of playing “the game.” It’s an excellent demonstration of character growth (I hope the second season features Retsuko as someone else’s Washimi). It’s a cute office love story with all the right beats (and the world’s most endearing hyena). A level beneath that sickly-cute veneer, however, is a commentary on just that. Aggretsuko says: don’t mistake kind, cute, and feminine, for soft. A sweet story can also be a dynamic one. That gentle red panda in accounting could kick your butt.

Women are socialized in many societies to be meek. We are taught to take up as little space as possible, or to bend to the will of creatures expected to be more forceful (see: men, the media, our periods). This doesn’t actually mean we are weak, or that we’ll bend to these external forces.

At its heart, Aggretsuko is a post-feminist coming-of-age tale. We have been taught that femininity is a weakness because it can’t be exploited as efficiently in a capitalist world. Even Retsuko’s best friend Fennecko points out that “getting Mr. Ton tea is not in the job description,” and yet, the women in the office are expected to do it anyway. Domesticity is valued in women, while somehow not being valued at all. A woman is expected to be nurturing and gentle, but she’s dismissed as a potential leader for those same traits.

The unrewarded emotional and domestic labour provided by everyday women around the world is worth noting. Aggretsuko puts this idea into the core of its writing and makes all the right jabs at it. It’s the tale of a woman discovering that capitalistic weakness is not human weakness, and that a person’s (or panda’s) personal worth is not indicative of their spot in the rat race.

At the end of the day, Aggretsuko acknowledges that treating things (and people) “as they seem” is a problematic and flawed system. After all, these small sexist microaggressions manifest in ways that harm all genders. Take, for example, Retsuko’s desire to find a man to “take care of her” early in the series. The way that women are pushed out and around so aggressively in the workplace is harmful to everyone.

A prime example of this double-edged sword is Tsunoda the Deer. She may as well be a packet of Splenda: her sickening sweetness is matched only by how nauseatingly fake she is. And yet, she excels under her boss’s thumb because she knows to stay there. She soars as much as a woman can under a chauvinist (literal) pig and, in the most incorrect and clumsy terms, she knows her place. However, at the end of the day, even Tsunoda gets her moment to shine. She explains to Retsuko that keeping Ton happy makes work a little bit easier for everyone because he’s a little bit more pleasant. Even Tsunoda, who Sanrio expertly crafts to be unlikeable, has a surprising amount of depth.

Just as nobody in the show can believe that Retsuko has a dark, complex side, Tsunoda has also been dismissed as a flat character. She is underestimated because we are rarely taught to explore past the surface of a sweet, kind woman.

Aggretsuko completely reinvents the image of the average workaday girl by simply giving her depth. The show has subverted who and what a woman is by acknowledging that all women are unique and interesting, and by acknowledging that we won’t all fit into cookie-cutter statements like “Women are [adjective]” or “Women like it when [generic statement].” By doing so, Aggretsuko has done something revolutionary in the most simple and uncompromising terms.