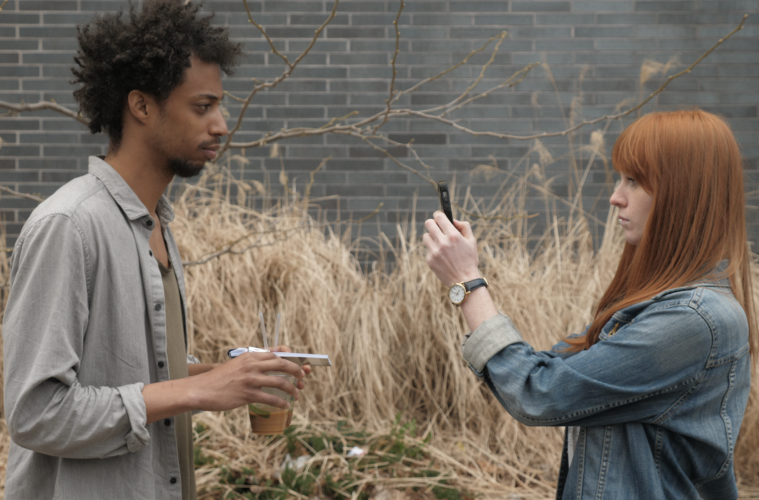 Ah, summer—the sun is shining, the birds are chirping, you’re peeling your thighs off of plastic patio chairs, and men are starting to yell obscene things at you from their cars/bikes/respective sides of the sidewalk. Street harassment feels like an unavoidable part of being a female-presenting person, with men of all ages relentlessly and often shamelessly making crass remarks—ones that are thinly veiled as compliments, but usually just leave women feeling upset and unsafe.

A predatory practice, catcalling is a way for men to exercise their power, making women feel smaller in one fell swoop, but this is where dynamic duo of writer Brittany Rae Robinson and director Rachel Cairns come in. Their YouTube production, entitled Street Series, is a comical, honest look into the heavy topics of street harassment, how we can hold men accountable for their actions and behaviours, and the generational understanding of the aforementioned, all while drumming up a laugh. We caught up with Brittany to chat about the series and the importance of turning harassment into hilarity.

Reel Honey: Street Series is such a relatable, easy-to-follow show with short punchy bits that really highlight the annoying interactions that come with street harassment. We know, however, that things like catcalling can escalate quickly and become very unfunny, very fast. Why and how did you decide to make something funny about something most folks wouldn’t call necessarily quote unquote funny?

Brittany Rae Robinson: You should see the look I get from some people when I tell them I made a comedy series about street harassment. The most valuable thing I learned in improv class was, comedy = TRUTH + PAIN. We use laughter when we are uncomfortable, when we need to release tension, when we need somewhere to put energy we don’t know what to do with. Comedy can help people think about issues gently without being aggressive or passing judgement. It offers a soft way of discussing difficult topics. For me personally, having a comedic take on such frustrating and sometimes painful experiences makes me feel empowered. It lets me take back control of a situation that was taken from me.

RH: Women in media often seem to have this unspoken responsibility when it comes to making films and creating content that rings true to their own experiences and lives. Did you find Street Series to be a cathartic way to reflect on some otherwise shitty experiences, or can it be tiring to have to revert to tropes to seemingly “propel” your comedy forwards?

BRR: Creating this series never felt forced or like a ‘woman’s obligation.’ It was something I needed to do for myself, and, gradually, it turned into something more once I realized other women needed an outlet as well. Frequent advice I’ve been given about creating over the years has always included, ‘Write what you know.’ Sadly, this is what I know.

Most episodes are based off my real experiences (exacerbated for comedic purposes). I really wanted to question why this behaviour is acceptable and where the need comes from because I genuinely don’t understand.

Writing and creating Street Series was cathartic in the way that it gave me control of my experiences, somewhere constructive to channel my rage and a place to say and do what I wish I could feel safe enough to do in real life. Unfortunately, you are unable to enforce consequences in the real world. It is not socially acceptable to throw a bag of flour at a vehicle for unwanted soliciting or [to] hand out tickets for time wasted. I like to think it would make me feel better if I could.

RH: In a culture that is just now seeming to understand the severity of street harassment as a form of genuine gender-based violence, how do you think shows like Street Series help make a dent in the larger understanding of this cultural phenomenon?

BRR: People have a hard time believing what they can’t see or haven’t experienced for themselves. My guy friends can’t fathom the idea that I’ve been followed home or have been yelled at after a polite rejection because I don’t surround myself with people who engage in that type of behaviour. Typically, men don’t have to worry about protecting themselves when walking home. They don’t keep keys in their hand, phones at the ready, walk with a friend, etc. They just walk home.

Street Series highlights those experiences and shows how many different ways it’s possible to be harassed. There’s no black and white approach to this issue, which is why the series is  meant to continue the conversation. It gives other women a place to have that catharsis and the opportunity to realize they aren’t alone. The series is not meant to rally people but [to] give women a chance to release any shame they might feel after an interaction. Give space to those who might not talk about it normally.

RH: The second episode, “Meet Cute,” is particularly hilarious, kind of highlighting the idea that street harassment has always existed in our zeitgeist, even with our parents, but the simple perception and ability to say “no” is the only thing that has changed. Have your parents, or elders in your communities seen the show? If so, what are their thoughts? How do you think Street Series can help in creating an evolving conversation around street harassment in generations besides ours?

BRR: My family will always be biased and supportive and love all my projects. That being said, from the female perspective in my family, my mother finds the series relatable across generations. In her youth, she told me that she never experienced vulgar behaviour but experienced other [things] that made her uncomfortable, be it men that stared at her, or whistled at her from afar.

Her mother, my Granny, loves the series. Her favourite is “Cathartic Thoughts.” She loved the throwing of items at the vehicle, which led her to tell me a story of a man who intentionally bumped into her on the street and her instinct was to take her purse and whack him in the back as he passed. [It was] an action [that] surprised even herself, but she reckons he never tried that tactic on a woman again.

In my Granny’s generation, women didn’t talk about [it] when these things happened. There was less help and protection. In my mother’s, there was more discussion about the discomfort, but it was the norm to enable the ‘boys will be boys’ attitude. That you should be thankful for the compliment and attention.

They both feel there is more awareness and resources for women these days, but even though you can call out this behaviour, they agree it still might not be safe to do so. You don’t know what strangers are capable of. In my own generation, I’ve had people say to me, “I don’t have that problem,” in a tone that suggests they wish that they did. That somehow being called out to proves or validates their attractiveness to society. This makes me think we still have some work to do.

BRR: Loved my production team. Loved. They gave the series such high production value. (Shout out to Rachel Cairns, Austin Ball, George Petrovic and Nicholas Porteous.) They were invested, open, and creatively, they just got me. Understood exactly what I was trying to convey. The series sat as little files on my computer for so long. Seeing it come to life on camera in the first edits brought me so much joy and excitement.

My favourite episode is “Progress.” It’s where the series comes full circle. We see the moderator of the group circle, who was the offender in the first episode, now leading a group of men in a learning curve. You get three variations on the steps/process to becoming a “woke male.’’ On the shoot day, as soon as we set up the circle of chairs, immediately the guys took on a sombre, introspective tone naturally, even off-camera. There must be something about sitting in a circle…

Rachel Cairns—my director, forever friend, and work wife—and I listened giggling from the basement. Because we were shooting in the round, we had to hide downstairs. It was the only episode I wasn’t acting in, so I really got to take it all in.

RH: How does creating content autonomously for a platform like YouTube vary from having studio direction? Does that creative freedom impact the way you hope to be able to spread your work in the future, be it positively or negatively?

BRR: The most important task as an independent creator is to get eyes on your projects. With the indie digital media world, I haven’t experienced any limitations [to my] creative freedom. However, there is no clear direction. There’s a lot of guesswork and trial and error.

Studio direction could mean more resources, options, and less limitations on the production and distribution side of things versus being self-funded and asking for favours. The digital media world is unpredictable and ever-changing. If we ever got the opportunity, I don’t think that studio direction would impact creative freedom in a negative way. I’d like to think that it would facilitate the message.That being said, I’ve never worked in a studio direction, so if you have any leads…

RH: Street Series ends with a group of men talking about their own experiences contributing to street harassment, some branded with the code “288.” What role do you think men do, or must play in the work towards ending street harassment? Why is it so important for the onus to be on men to do that work?

BRR: The truth, my truth: I’ve only been harassed by men. So it only makes sense to me that men be a part of the changes. Part of it is catching the behaviour early. No one is born a predator, they progress in baby steps because they were given the permission to push those boundaries. The first episode is called “288: Lewd Conduct.” In the dialogue, what he says isn’t actually considered ‘lewd,’ but it’s foreshadowing that this is how these interactions start. Innocent enough until lines start getting crossed.

Another important part is for men to acknowledge how they are contributing to the culture, listen to women’s experiences, and understand the blind spots in these types of issues. It’s their job to become aware. It’s difficult for those who have been victimized to have the energy to fight for their rights and thus [it’s important] to become allies and support women in that change. We often feel alone, unheard, dismissed.

This is why the last episode is so special. I think it’s really poignant that a man is facilitating the conversation, stepping up to share how we can do better. To talk about issues with thought and care, reflecting on how they’ve contributed to the culture and supporting each other in that change. It’s really brave to admit you’ve made mistakes and admirable to commit to being a part of the change.

RH: This series is hilarious, and just short enough to pique interest, make viewers laugh, and prove a point without the threat of boredom. So, what’s next? Will we see a second season, or are we waiting for bigger and better?

BRR: I’m glad you appreciate the timing of the series. I wanted to stress the briefness of the episodes not only because the attention span of the internet is disintegrating every day, but because in real life, these instances can happen so quickly [that] you don’t have time to process what happened. It’s [a] true-to-life experience.

There’s always the fear after creating something you are proud of [that] the next thing won’t be as profound, won’t evoke as much thought. Fixed mindset aside, [the second season] is in development. We’d like to continue the street perspective, making it better by expanding on that and bringing in more intersectional perspectives by working with other writers.