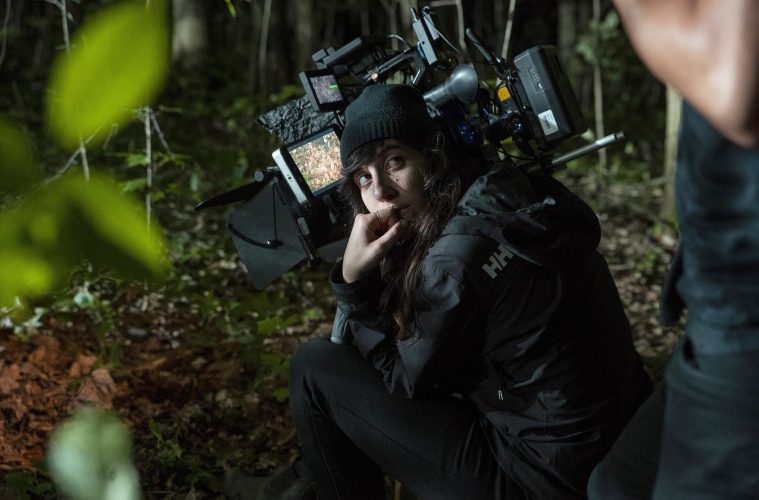 Toronto-based filmmaker and cinematographer Christina Ienna is undeniably versatile. With a filmography that includes narrative, documentary, and commercial work, she continuously displays immense talent and passion. Ienna graduated from the University of Windsor with a degree in film and communications, and has since established herself as a creative force.

Her recent project, Handmade Film, focuses on experimental filmmaker Lindsay McIntyre, who works with 16mm film and prepares handmade film emulsion. The documentary has screened at numerous festivals, including San Francisco Documentary Festival, Vancouver Short Film Festival, Portland Film Festival, and Catalina Film Festival. It has also received several awards, including Best Cinematography at Fava Fest and Best of Showcase at this year’s WIFT-T Showcase. We chatted with Ienna about her creative inspirations, telling meaningful stories, and the initiative she recently launched for women in film, called HERe.

RH: First of all, congratulations on winning the Best of Showcase Award for Handmade Film at this year’s WIFT-T Showcase. Could you talk about your experience making the film and what it was like to travel around with the film to different festivals?

CI: Thank you! I was lucky enough to receive my first film grant from the Edmonton Arts Council and made three short documentaries using the funds. At the time, I was in the process of moving to Toronto while filming the project. Since my time was limited, I had to be extremely productive when driving back and forth from Edmonton to Toronto.

My crew was small, but I was very lucky to have highly skilled friends helping me. For Handmade Film, we spent the day filming and interviewing Lindsay, and then I shipped the footage off to Kyle, my editor. He was also moving to Vancouver, so post-production was entirely done online and over the phone. When the series of films was complete, I felt Handmade Film was the strongest of the three and began submitting the piece to festivals. I did not expect the level of reception the film has received over the past year. Winning awards in multiple categories and having the opportunity to attend some wonderful festivals has definitely broadened my network and credibility as a filmmaker.

What originally inspired you to go into filmmaking?

I was a pretty creative kid growing up, [and] film eventually became the medium I landed on. I was heavily involved in art, dance, and theatre throughout my whole childhood. We watched a lot of films growing up and I was innately fascinated with the behind-the-scenes featurettes more than the film itself at times. Picking up my father’s old Pentax 35mm camera had a large impact. It was my introduction into taking photography seriously as a teen and I really liked the creative tangibility of it.

You have a lot of experience with music videos and acoustic music sessions, whether it’s with Shred Kelly’s music video for “Going Sideways” or the Trinity Bellwoods Acoustic Session with Daniel Caesar. Are you drawn to projects that feature musicians? Do you approach musically-focused projects in a different way from documentary or commercial work?

Every project has different needs. I cater to the project and its intention. An artist may have a vibe or image they want to pair with their music, just as a branded product would. Once established, I do all I can to maintain their story and build a connection with an audience whether I am shooting or directing. In documentary, I feel a stronger need to be as true to the environment or person I am filming as much as possible to best serve the genre and story. Story triumphs [over] image. Cinematography should always serve the story, whether it is scripted or not.

I recently watched the beautiful piece you filmed for the Canadian Journalism Foundation that was dedicated to Jodi Kantor and Megan Twohey, the two New York Times investigative reporters who broke the Harvey Weinstein story. How did you get involved with the project and what was your creative process like for it, given the huge social and emotional impact this story has had on the world?

I was grateful for the opportunity to work on this piece honouring Jodi Kantor and Megan Twohey. They both received the Tribute Award at this year’s Canadian Journalism Awards and this video played before they accepted the award. Director Matt Sadowski and I connected over social media and worked on a commercial together prior to filming this project. Shortly after, we spent a few days in New York speaking to family members, friends, and co-workers about Jodi and Megan. Matt took great care in sharing their story and thought it was important to have a female behind the camera during the process. Jodi and Megan’s parents were incredibly proud and supportive of their daughters. It was emotional to hear how much their work means to everyone, as we have all been greatly impacted in different ways. We really wanted to highlight the celebration of these two women and their achievements.

I feel most productive serving a story like this, especially when it can shift perspectives. It’s the most gratifying part of my job. With projects like this, I do my best to make a conscious effort to capture people as authentically as possible. The small details that make them who they are, from their space to their mannerisms.

HERe is an incredible initiative that you launched recently, and it’s essentially a Canadian female film crew directory aimed at diversifying the industry with female technicians. Can you speak about how this experience has been so far?

There has been an equal amount of supportive and negative feedback. We can’t be everything to everyone all at once, but the fact that there is a demand for more women in these roles is a good sign. HERe, at its core, is about visibility. Talking about it in any way is still bringing up the issue that women want to be seen as equals in skill and pay in these fields.

The directory is currently focused in Canada, with a growing roster of Canadian female technicians. Do you have any plans in the future to expand internationally, or do you intend to keep it strictly Canada-based? Have you encountered any difficulties?

Finding women across Canada to fill the current positions we are listing has been much more difficult than anticipated. It goes to show how important it is to encourage and support women interested in roles like sound recording, grip, or electric. There is also a great expectation for the site to operate at a level we can’t currently afford or maintain, being in such early stages.

We are just over six months old, self-funded, and managed by a couple volunteers working in the industry themselves. We are doing what we can with limited resources and time while looking into potential funding. HERe is not just a list of names – it’s a community, and people will only get out of it as much as they put in. We encourage everyone to follow, share, apply, and donate to our cause so we can continue our work and have a chance to expand.

HERe recently hosted a lighting and grip workshop with Eddy Mikolic back in April. What was that session like? Are there other upcoming workshops or events to watch out for?

HERe was grateful to have Eddy generously share some of his expertise in lighting during our first workshop. Ontario Camera donated their space and DMG Lumière brought additional lighting to the event. The intention is to help women further develop technical skills at an affordable price so they can continue to advance in their field. We want to help cultivate highly skilled women in these underrepresented departments.

We hope to do another a more extensive full-day lighting and grip workshop in the winter, as well as put together a post-production workshop on VFX and colour-grading soon. In the meantime, HERe is constantly posting other workshops and events happening across Canada on our social platforms.

What’s next for you in your career?

My focus is always on developing my skills further and building up my body of work with more commercial and long-form documentary or narrative films. I have a few projects of my own in development as well.