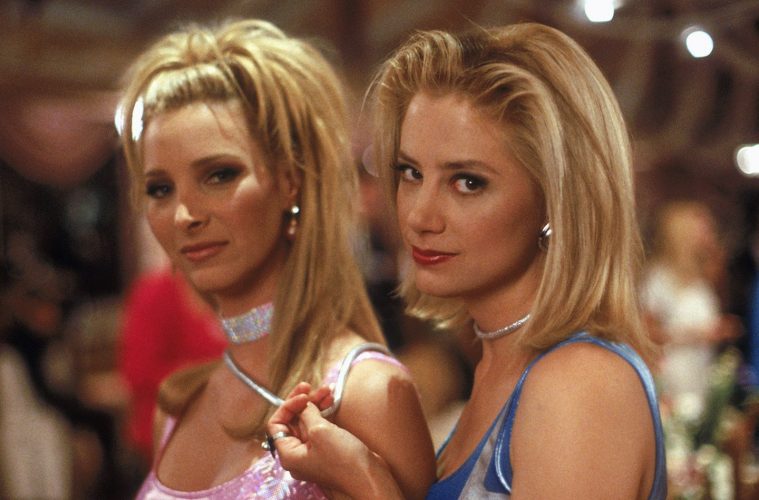 I used to listen to John Mayer’s “No Such Thing,” fantasizing about doing the same thing he does in the song – busting down the double-doors at my ten-year high school reunion, screaming at the top of my lungs! But in the real world, the idea of a high school reunion has always seemed like a nightmare to me. Who wants to drive for hours just to make small talk with people they didn’t care enough about to keep in touch with? I’d rather reunite with my favorite movie of all time instead.

It’s clear from the get-go that Romy and Michele aren’t merely BFFs – they’re truly Best Friends Forever! At 28, they’re not worried about careers, marriage, or kids. They love dancing, going to the gym, snacking, reading fashion magazines, and reminiscing together. They’ve watched Pretty Woman 36 times, and never get tired of making fun of it!

With the reunion looming, Romy decides that their lives aren’t that impressive. After Romy fails to get them boyfriends and the unemployed Michele’s search for a job is unsuccessful, they come up with a brilliant idea – they pretend that they’re successful businesswomen who invented Post-Its! Because, who would ever know?!

When their cover is inevitably blown, Romy is distraught. Michele tells her that she didn’t think that their lives weren’t impressive until Romy said so. That she had a blast with her in high school and she’s had a blast ever since. They march back into the reunion as their true selves – in their “fun, frisky” fashions, sewn by Michele and designed by both of them.

Romy and Michele’s High School Reunion is beloved for many reasons – its message of friendship, its loveable losers narrative, costume designer Mona May’s use of feathers and sequins, the legendary dance to Cyndi Lauper’s “Time After Time,” and especially its iconic quotes. My favorite is when Romy rebuffs a suit salesman’s advances with, “Would you excuse me? I cut my foot before and my shoe is filling up with blood.” The line has given me so much joy that I’ve had it marked permanently as a tattoo of a shoe filling up with blood on my left arm!

But in the 36 or so times that I have watched it, a new theme has come to resonate with me – success on your own terms. What does success mean to most people? An accomplished career? Academic achievement? Owning a home? Having a family?

The thing is, I’ve never had a lucrative career. I never graduated college. Being a homeowner in Toronto is impossible for me. And I don’t want kids. For the longest time, I was made to feel like I was unsuccessful because I didn’t have or want or think I could achieve these kinds of par-for-the-course goals. By my parents, by co-workers, by acquaintances – but most of all, by myself.

Those voices in my head always telling me that I was a loser? Those were my old pals anxiety and depression. I spent years seeing GPs, just to have them fill out a prescription pad and send me on my way. I took the pills and thought I was doing everything right, but I’d still have wild mood swings. I tried to see psychiatrists, but I felt like they brushed me off. My depression wasn’t that serious. All I needed to do was exercise and eat right, they said.

Three years ago, I was successful in finding someone who took my mental health seriously. I was placed with a psychiatrist who had a sense that there was more to my depression and anxiety. He diagnosed me with bipolar II disorder.

Medication was a trial-and-error process, but overall, my mood was improving. The most surprising thing? I started feeling inspired again. My long-lost passion for writing came back. I hadn’t written in years, and suddenly I knew that I had stories to tell, opinions to share, and a unique voice. I had been at such low points that I never thought I’d have talent again (if I ever had it in the first place). I was successful in realizing that I was, in fact, a talented writer.

Then, with one small dosage change last year, I felt something I hadn’t ever felt before – stable. This was the most meaningful success. Achieving stability isn’t something that every bipolar person is fortunate enough to experience, and I’m grateful to have an incredible team working with me – my psychiatrist, my talk therapist, my psychotherapist, my support group, my friends, and some family.  Most important to this success was my own follow-through.

With stability, more success followed. I started a website for my writing. I was published in a zine. I edited and sold a zine of my own. I started a podcast. I even learned embroidery! And now, here you are reading my latest success – pitching and publishing a pop culture essay and getting paid to write it!

Romy and Michele’s biggest passion is fashion. And there’s nothing wrong with that! My biggest passions? Mental health and pop culture. I’m open and forthcoming about my mental health issues and am tremendously curious about other people’s experiences with mental health, addiction, and trauma. As for pop culture, I adore all of it, from the prestige to the trashy and everything in between. And there’s no guilt in my pleasure of discussing films, TV, music, and celebrities. I’m a woman who lives for pop culture while living with mental illness!

Romy and Michele have two kinds of huge successes that most people can only dream of – a successful creative spirit, constantly designing and sewing their own clothes; and a true, long-lasting friendship. At the end of the movie, Romy and Michele are shown thriving in the fashion biz. Me? I’m thriving by finding out how pop culture has resonated with people from a mental health perspective on my podcast, Pop& Down.

Romy and Michele’s High School Reunion remains my favorite movie of all time because of all the ways I’ve related to its protagonists. I wasn’t in the A-crowd in high school, I peaced out to the big city as soon as I graduated, and I’ve had the same best friend since my teenage years (although she’s more of a smart and stylish Lisa Luder than a Romy!). And are there times where all I’ve eaten that day are things like gummy bears, chips, and Diet Coke? Duh! But the way I’ve been able to redefine what success means to me, like Michele and Romy did, is probably what’s resonated with me most of all. I’m in a place where I wake up every day with the intention of having a Romy and Michele Day – being my authentic self, having fun with what matters to me, and feeling proud of all of my personal successes.