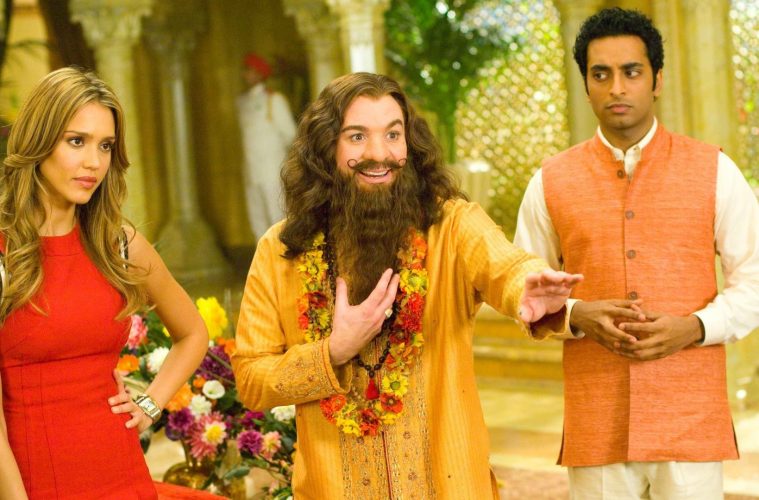 Ping! I get an iMessage in my group chat with two of my close friends. I open it and read, “Guys on the radio are saying that The Love Guru was the worst movie ever. And I’m like y’all are uninformed girl.”

Though I didn’t respond, this text brought out an immediate reaction in me. Of course, The Love Guru is one of the worst movies ever! Mike Myers practically in brownface, the cringeworthy representation of gurus… how could you not realize that this movie is completely not okay? I didn’t bother trying to talk to my friends about how problematic the movie is (and why it probably does deserve the title of Worst Movie Ever) because it was clear that while my taste and intellect surrounding film in general have changed, theirs clearly have not.

Released a decade ago, I was ten years old when I first watched The Love Guru with all of my friends. And we all loved it. I’ve always been a sucker for absurd comedy, and this was just another film that ten-year-old me found hilarious. Young me, I can safely say, didn’t anticipate how much the movie would bother me ten years later. Which is why, even thinking about The Love Guru as I write this, I cringe.

And it’s not the only film that gets this reaction out of me these days. Besides The Love Guru, I now cringe when I watch (or try to watch) Gossip Girl, 13 Reasons Why, Pocahontas, The Princess Diaries, 50 Shades of Grey, Mean Girls, Sex and The City (both the show and the movies), The Best Exotic Marigold Hotel, Captain Phillips, almost every Marilyn Monroe movie on Netflix, Friends… and the list is much longer, but I’ll spare you.

And what do my issues with these movies and shows pertain to? Well, usually the subtle power dynamics performed that hint at larger problems, communicated through the usage of tropes or gazes. Racist, sexist, homophobic, anti-Semitic, or colonial gazes and tropes subtly appear in much of the film and TV I watch. But while I used to either not notice or not care about these issues in film and TV, and was able to sideline the problematic things I observed, in my reinvented state, I’m now unable to ignore the messages communicated.

Certainly, I’m not alone in this. Millennials have pushed social justice and equity to the front lines, which helps explain why 15 years ago, it may have been considered uncool to declare yourself a feminist, while today you are a pariah if you don’t declare yourself one. While 10 years ago, there was no real uproar to The Love Guru, I doubt that it would even be released today because of the tremendous backlash that would ensue.

Movies and TV communicate the values considered acceptable in a given society. This means that films and series are declared either acceptable or unacceptable, based on the values communicated through tropes and gazes, upon their release. The film or series is then subject to reassessment later on, when the values of that society shift or become more insightful.

What does this mean in the Trump era? Can media be an unaccountable space? Can we separate problematic representations or ideas presented in media from real-life manifestations of racism, sexism, and the many phobias that attack identities and livelihoods? The answer is no, because representation in media is not something independent of smaller-scale ideas and notions that result in real-life hatred, prejudice, and judgment of others. As such, in the era of Trumpism and the alt-right, I find myself continuously assessing movies and series’ usage of tropes and gazes in relation to the current political climate. A political climate filled with hatred and bigotry. A political climate in which a lot of people feel under attack and in danger. Messages communicated through media matter and have tangible consequences, no matter how peripheral in a plot or character they may seem.

Ask yourself this: Is a racialized character’s portrayal as ‘exotic’ or ‘foreign’ or ‘backward’ really that separate a thinking process from Trump’s claims that immigration is a threat to American livelihood? Is a movie that asserts rigidly-prescribed gender roles separable from the Trump administration’s transphobic tirade? How about if a movie says that wearing a niqab is fundamentally wrong – is that separate from the surge of Islamophobia happening in the US right now?

I know a lot of people who would respond to me saying, “It’s just a movie/show, it’s not supposed to be political, can’t you just relax?” Sorry, but I really can’t. If I want to be a strong voice against hateful narratives during this Trump era, I have to look at the fundamental issues that his platform thrives off of. Those issues, including racism, transphobia, sexism, and more, are ones that continue to be communicated today through certain tropes and gazes. I can’t just say, “Trump is bad,” and see the rhetoric or policy he promotes as something independent from the pop culture we fail to hold accountable, or at least question. I have to be more aware than that.

As a result, my relationship to movies and TV has changed. I now want to critically engage with the media I consume. If I see a power dynamic that is questionable or promotes ideas inseparable from Trump’s rhetoric, best believe I am going to make note of it. If I see something problematic as fuck, I will spend a considerable amount of time thinking about its repercussions. It’s my own form of self-care in this current turbulent political climate. It’s also my own way of understanding how Trumpism manifested in the first place.

Pop culture is more than just something for enjoyment. It is political in nature. It communicates to a certain audience the values and systems that are considered correct. If you want to hold dangerous political rhetoric accountable, you have to hold TV and film accountable too.