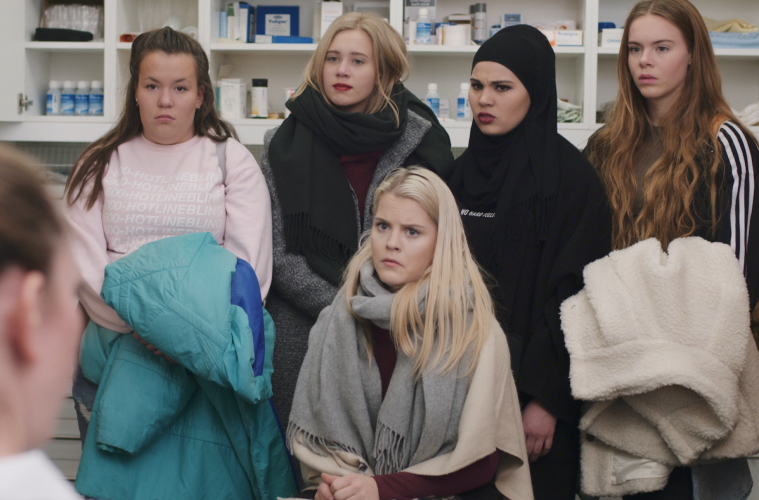 The Radical Empathy of ‘Skam’

In Skam’s fourth season, a teenage boy named Even starts shakily singing John Lennon’s “Imagine” while doing karaoke. Soon, the whole room, which consists of other kids from his high school, gets in on the song, too: “No need for greed or hunger / A brotherhood of man / Imagine all the people sharing all the world.” Kids start swaying and hugging each other, making out, and saying, “I love you”. It’s cheesy, yes, but the earnestness is so contagious that I found myself grinning. This is the TV show Skam distilled to its essence.

Skam is like if Instagram Stories, Icona Pop, and Skins had a baby. It’s Teen Vogue in sentient, European form. It’s like if Fjällräven, IKEA, and Adidas commissioned the Norwegian Broadcasting Corporation to make a show that prominently portrayed their merchandise. It’s a teen soap opera for the social media generation.

I recently heard about the Norwegian show online and was intrigued by its rave reviews. Skam, which translates to “shame” in English, follows different groups of teenagers at Hartvig Nissen secondary school in Oslo as they navigate the sticky world of high school politics. According to The Atlantic, short clips are released in real time via Skam‘s website, which are then shared around on social media. Then, at the end of the week, the episode plays together on Norwegian television. Plenty of fan sites stream the episodes online, however, complete with English subtitles. Although I know the basics of Scandinavian culture (my best friend is Swedish and lives in Oslo), there was plenty that I was still in the dark about.

For example, why was everyone was talking about buses, toilet paper, and Pepsi Max soda so much? All was soon revealed: Pepsi Max is actually the name of the popular girls’ russ bus, and they end up raising money for it by selling toilet paper. Russ plays a huge role in Skam, and it is only a tradition in Norway. Russefeiring is when groups of high school seniors buy Greyhound-size buses and party on them for the last few weeks of their final semester, until Norwegian Constitution Day on May 17th. It’s an important social status symbol to be included in a bus group, and during russ, the participants wear red overalls that they decorate.

Each season of Skam zeroes in on a different character at their high school. The first follows Eva (Lisa Teige), who is forced to seek out new pals after falling out with her old friend group. Eva winds up forming a russ bus with the other outcast girls at school: Chris, Noora, Sana, and Vilde. We learn more about Noora (Josefine Frida Pettersen) in the second season, when she gets involved with a popular boy at school. He’s in a russ group called – I kid you not – The Penetrators, and he’s a textbook bad boy (or is he?). The third installment is about Isak (Tarjei Sandvik Moe), who realizes he is gay and falls in love with Even, another boy at school. We get to watch him evolve from an overcompensating homophobe into an out gay man. And then there’s Sana (Iman Meskini) in the fourth season – a Moroccan-Norwegian Muslim girl who feels out of place in a mostly atheist country.

Skam’s greatest strength is empathy, which oozes from its dialogue, usually in the form of a long diatribe. Nowhere is this more apparent than season four, which depicts Sana’s struggle to reconcile her Muslim faith with her Norwegian surroundings. When Isak (another outsider) asks her why she’s so prickly, Sana replies, “Try growing up in this country as a Muslim girl without turning cold.” She goes on to say that she feels judged all of the time because of her hijab. “We talk about freedom of religion and so many other freedoms here in Norway, but wearing an extra article of clothing is wrong?”

Isak counters that Norwegians don’t always know how to respond and that asking dumb questions is important. “If we stop asking the dumb questions, we start making up our own answers”, he says. “That’s dangerous. You just have to stop looking for racism in dumb questions. Even if they seem dumb and racist, it’s so fucking important that you answer them”.

This echoes one that Sana makes herself in the second season, when Noora is trying to make a decision about whether to date a boy whose character she questions. “War doesn’t start with violence”, Sana tells her. “It starts with misunderstandings and prejudice…. You have to accept that not everyone sees the world the way you do. You can’t just believe that everyone has the answers to what is right and wrong. If you haven’t even made an attempt to understand the one you love, then I’ll be pessimistic on behalf of the whole world”.

It’s in the little similarities that I connected with the characters. Noora reads Kinfolk, and her guilty pleasure is Justin Bieber. Even loves listening to Nas, while Isak prefers N.W.A. Eva enjoys watching Dr. Phil on her laptop while pigging out on ice cream. The boys like skipping class and going to McDonald’s. These Norwegian teens make out, break up, have sex, miscommunicate on social media, and read listicles on how to get over someone. Who among us has not done these things?

And although the characters on Skam are relatable, I still learned a lot about Norwegian culture. The drinking age in Norway is 18, which is the average for European countries, but I was still shocked by how laissez-faire nearly all of the characters are about alcohol. They talk about it constantly. When they’re not blacking out at a party and sloppily hugging their friends, they’re talking about being hungover, planning to buy more alcohol, or trying to convince someone to buy it for them if they’re underage.

I also got the impression that Norwegian teens are incredibly independent compared to Americans. We only see three parents over the course of four seasons, and they are used sparingly. This keeps the focus on Generation Z and their unique struggles. The equivalent of high school juniors move in with their significant others, sleep over on school nights with no mention of contacting their parents (literally where are the adults for any of this?), and have sophisticated wine parties at one another’s picturesque apartments. Is this normal? And how do they afford rent and groceries in addition to their flawless, name-brand wardrobes? Does all of that free healthcare and education translate into more money for kickass outerwear? If so, one ticket to Oslo, please!

And although they always look great (Norwegian boys love a good hood – sometimes two at a time!), the characters still look realistic. They sometimes have acne, bed-head, and bags under their eyes.

The first thing I wrote down about Noora was: “That blonde girl has the best lipstick and I want to emulate her in every way”. And that was before I saw her Log Lady costume at the Halloween party in season one, which solidified her in my heart as the real GOAT. Jonas has eyebrows so thick that I could lead an expedition into them. I’d sit for two hours and learn about Even’s hair routine, and I want Sana to describe her makeup collection to me in-depth.

As of this summer, Skam is over in Norway, but there is an American remake currently in the pipeline. While I love the idea of more of this show, I don’t think an American Skam is the answer. I can’t imagine the reboot having the same heart and artistic-yet-homemade quality that made the original’s characters feel so real.

In fact, the reason I loved Skam so much was the ability to glimpse teenage life in an area of the world that I’m intensely curious about. Do I really need to watch another show about American teenagers? Does anyone, anywhere in the world, need that? With the success of countless shows like The O.C., Dawson’s Creek, and now Riverdale, what more needs to be said? Will prom be the stand-in for russ storylines?

In season three, Even draws a series of cute cartoons for Isak, depicting the same scene in parallel parts of the universe. For instance, in one dimension, Isak and Even eat cheese bread with cardamom, and in another, they eat it without. So, in this reality, I am obsessed with fictional teenagers in a country that I’ve never been to, and I’m upset that I will never get to see the fruits of their russ labor. In a parallel part of the universe, I have never set eyes on Skam, and I am blissfully ignorant of life in pubescent Oslo.