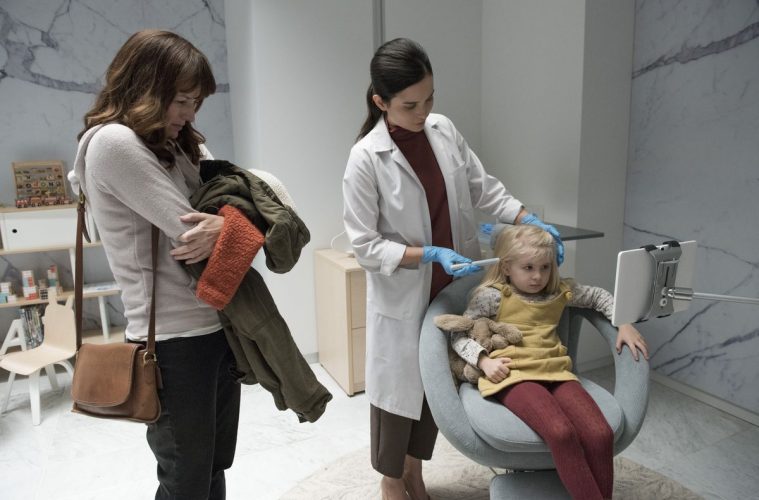 Love in a technological world brings new challenges. Technology has changed the ways we build, maintain, and end the loving relationships we have with the people around us. We can interact with people thousands of miles away, or just a few, and build meaningful, deep connections.

Black Mirror is a television series that highlights the consequences of new technologies through stories laced with dark satire. The focus of this essay is on “Arkangel,” the episode that examines the love between a mother and her daughter whose relationship is built, maintained, and ultimately destroyed by technology. Love comes in many forms, but healthy relationships tend to have universal themes. Firstly, love and trust go hand in hand. Trust takes time and work to build, and a split second to destroy – often with dire consequences. Secondly, love is often peppered with fear. Fear makes you appreciate what you have, but in some cases, fear can cause you to lose what you value the most.

Finally, love and independence complement each other. Building other relationships allows love to breathe, grow, and flourish. Dependence can smother it. Mother-daughter relationships bring their own unique characteristics and challenges. We see these themes throughout “Arkangel” as Marie, a mother with good intentions, destroys each of these pieces, one by one, in her relationship with her daughter, Sara.

Sara is three years old when Marie introduces her to Arkangel, the new child monitoring system. After Sara goes missing one evening, fearful Marie takes her to a clinic. The process of implanting a chip – known as Arkangel – begins. Sara is part of an early trial. Marie can now use a tablet to see everything Sara sees and can track her exact location. There is also the option to turn on what are called “content limitations” – if something causes Sara stress, Marie can turn on the filter and block out the sight and sound of what is affecting her daughter. Marie seems hesitant about the last feature, and uneasy throughout the process, but her love for her daughter and anxiety about losing her again take control.

Arkangel accomplishes several things for Marie and Sara’s relationship. Firstly, it eliminates the need for them to build trust. Marie can pinpoint Sara’s location at any time and see what she sees, and Sara knows this. Secondly, because Arkangel diminishes fear, Marie does not have to worry about her daughter anymore. If Sara is scared, she can turn on the “content limitation” filter, and if she is lost, she can find her. Lastly, over time we see Marie and Sara develop a close bond with one another because of Arkangel, as they are always together, even if not physically. Marie is not shown to have any other relationships, and Sara has a hard time making friends at school, getting called names like “walking snitch” and “chip head.” They seem to only have each other.

Even with this close bond, without trust, fear, and independence, we see Marie’s relationship with her daughter begin to strain. Arkangel cannot be removed, and Marie keeps the filter on at all times. After five years of living with the technology, we see Sara, frustrated by the filter, cut herself and realize that she cannot see blood. Marie walks in, shocked, and Sara turns to her mother and slaps her in anger. This seems to symbolize Sara rebelling against what Marie did to her when she was three years old – setting their relationship on a path of good intentions with bad consequences, and Sara being frustrated that she cannot feel fear.

Marie takes Sara to a doctor and finds out that Arkangel is likely to blame for her daughter’s behaviour. It has been banned in many countries and is being discontinued because of side effects. While the implant cannot be removed from Sara’s brain, the doctor suggests that for Sara’s well-being, Marie should turn off the tablet and put it away. Concerned for her daughter, who she clearly loves, she obliges. Without Arkangel, the love between Marie and Sara suddenly must make room for trust, fear, independence, and many other feelings.

We then see Sara as a teenager. The tablet has been away for years, and Marie and Sara’s relationship seems stronger. There is a sense of independence from one another – we see Sara with friends, and we finally see Marie have a relationship. But there is also a sense of status quo. Marie still makes a smoothie for her daughter every morning, which she has done since she was three years old. With trust present and fear unapparent, the relationship is portrayed as healthy. But as many mothers know, teenage daughters bring new challenges to the mother-daughter relationship, providing the ultimate test of whether taking away Arkangel has truly fixed everything.

We see fear again when Sara does not return from a friend’s house on time. Marie desperately calls her daughter multiple times, and calls many of her friend’s parents, wondering where she is. Unbeknownst to Marie, Sara is being a typical teenager – she is actually at a party, and is hanging out with a boy she is interested in named Trick. We begin to see the familiar pattern as fear takes control of Marie. She runs to the attic and unearths the Arkangel tablet, desperate to see where her daughter is. The technology shows Sara having sex and trying cocaine with Trick, and later on, her daughter tearfully texting Trick wondering why he is ignoring her. Little does Sara know, her mother had secretly gone to him and threatened to leak Arkangel’s evidence if he did not stay away from her daughter.

After years of building up trust, it is broken in mere seconds. Trust was never able to get its footing in Marie and Sara’s relationship, as Arkangel was always there to relieve any growing pains associated with the dynamics of their life without it. With the reintroduction of Arkangel, fear has been dampened, trust is no longer required, and independence is gone, especially with Marie destroying Sara’s other loving relationship. Once again, we are reminded of when Sara was younger. She is feeling the consequences of the decisions her mother has made for her. This time, however, the lack of trust, fear, and independence is not a mutual agreement – it is one-sided.

At the climax of the episode, Arkangel alerts Marie that Sara is pregnant. During their daily routine, Marie puts an emergency contraceptive in Sara’s smoothie without her knowledge. For the entire episode, whenever Sara came home, Marie was there, waiting for her. After realizing her mother was using Arkangel again, for the first time, Sara arrives home without Marie being there. This symbolizes that Sara is no longer dependent on her mother, while it is clear that her mother is still very dependent on her. Sara discovers the Arkangel tablet in her mother’s room, and we proceed to see Marie coming home to her daughter, who is clutching the tablet in a rage.

“I was trying to protect you. I was trying to keep you safe. Everything I’ve done, I’ve done for you. Honey, I love you,” Marie pleads, just before her daughter beats her to the ground with the tablet. The filter accidentally turns on, showing a blurry Marie yelling muffled words as her daughter strikes her again and again. When the tablet finally breaks, so does her mother’s control, and Sara is forced to see the unfiltered version of her mother’s bloody, defeated face.

Marie regains consciousness, but Sara is nowhere to be found. She stumbles outside, screaming Sara’s name, but her daughter is lost again. The technology that was supposed to strengthen their love ends up destroying it.

Love is the most complex emotion we experience in our lives. We feel many forms of it, and it is a source of both unbelievable happiness and excruciating pain. While love is not something you can pick up with your bare hands, like a tablet, it is something much more fluid, open to change and influence. We must be careful about how we change the way we love in a rapidly changing world.