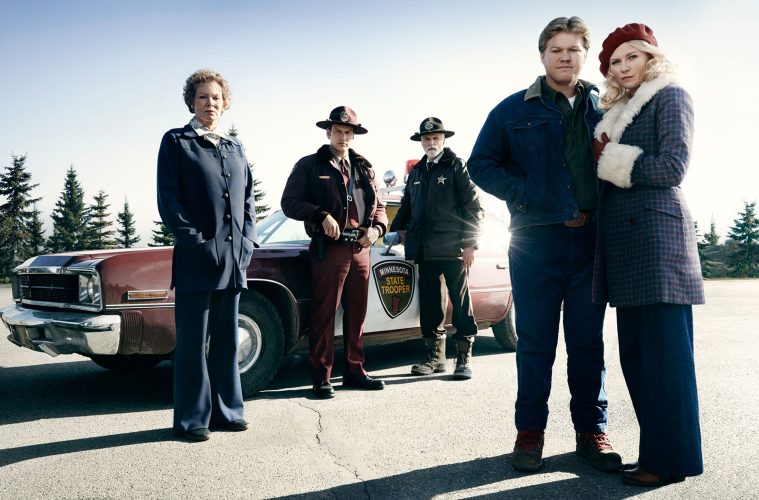 A Crisis of Confidence, The American Dream, and FX’s ‘Fargo’

“The erosion of our confidence in the future is threatening to destroy the social and the political fabric of America.” – Jimmy Carter, “Crisis of Confidence” speech

In the opening shots of the second season of FX’s Fargo, the camera sweeps across a battlefield strewn with arrow-pierced soldiers in period dress at various stages of dying. We focus on a Native American man, surveying the death and destruction around him. A title card – The Massacre at Sioux Falls – appears and is followed by another, this one firing up the circuits of the brain: Starring Ronald Reagan.

The Native American actor turns towards the camera and asks, “What are we waiting for?” The camera drifts in and out of focus as the film crew starts rustling behind it; the illusion broken. Everything comes to a standstill as they wait for Ronald Reagan – then an actor nicknamed “Dutch” – to come to the set. The director assures the actor, who is getting restless, that Dutch is a “class act” – the implication being that he is worth the wait.

Moments of standstill are what this season of Fargo is ultimately focused on – what transpires when nothing seems to be happening at all. In this specific span of stillness, there is a sort of festering. Communication breaks down and becomes misinterpreted. Plans are developed that will never come to their desired fruition. What should be a time of reflection, or even just stasis, gets shaken up like a soda can, waiting for someone to pop the top. Even though it is set in the late 1970s, the show’s central concern is depicting not so much a time and place, but a mood. It is becoming clear that the American Dream sold to the American people is fictitious and unsustainable. Fargo uses this contentious moment in American history to examine what a “crisis of confidence” means for small-town people, tucked away in the frozen north.

The device that brings us into the present moment of the show is then-president Jimmy Carter’s seminal “Crisis of Confidence” speech. In the midst of a gas shortage, an energy crisis, and general malaise from the American people, Carter’s speech urged introspection about the mental state of the country. He sought to answer the question of what was causing the American people to become so pessimistic. When Carter makes his speech, he makes direct eye-contact with the viewer, telling us that the direness of the political, social, and economic situation America is in is a part of a larger “crisis of confidence”. The crisis, per Carter, threatened to “destroy the social and the political fabric of America”. He speaks of the anxiety of the American people as an erosion of the ideals that have kept the country functioning. But even he falls victim to the flawed concept of American exceptionalism – that comfort for all existed in some not too distant past.

The speech sheds light on a new feeling – a majority of people believe that they will not be in a better position in the next five years. It’s not so much pessimism as it is All-American Despair. It runs counter to the idealism of the concept of the American Dream. This faulty, if not completely unattainable, mechanism is a way to process pain and trauma, and it is breaking down, leaving the characters of Fargo to deal with the fallout. Each plotline in this season is meant to highlight the fallacies of relying on idealism. Lou, a Vietnam War veteran who has a young family and a starter house, knows that his wife’s cancer will eventually kill her. The Gerhardt family built a crime empire from a shoebox but are watching it get chipped away by outside corporate interests from Kansas City. Peggy and Ed, a young couple at a tenuous time in their marriage, attempt to cover up their accidental killing of Rye Gerhardt. This cover-up becomes a last-ditch effort to save their marriage, which has been weakened by their radically different ideas of happiness. Even Mike Milligan, part of the Kansas City “mafia”, fights to show his white bosses that he deserves to be a manager in the business and finds that his dream is much smaller than he could have imagined. No one can outrun the trauma that the Dream has long covered up. 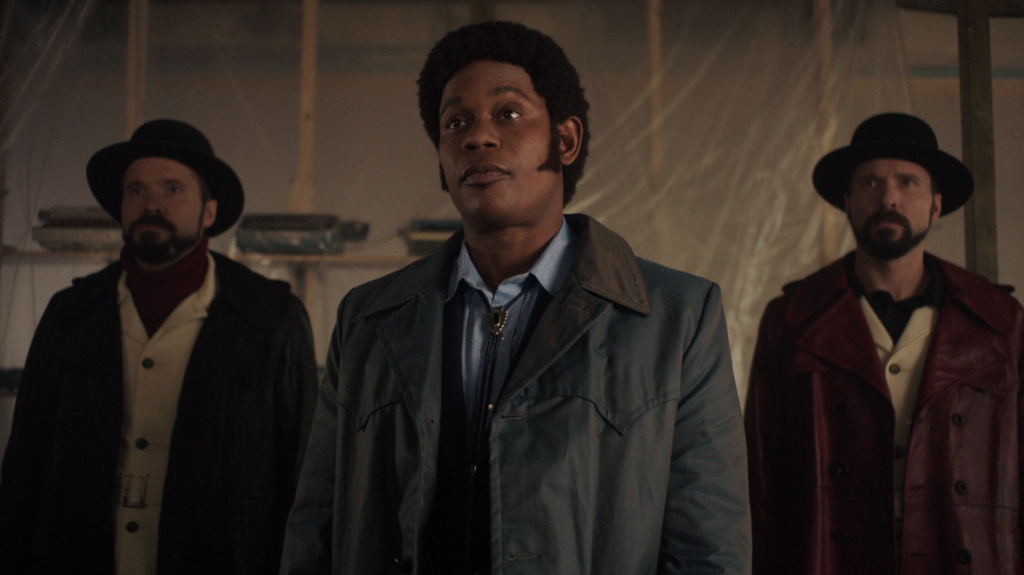 The show tries to offer a solution in the character of Ronald Reagan. At the mid-season mark, we finally see Reagan as he emerges as a presidential candidate, seemingly shedding his past career as an actor. Lou is tasked with escorting him across Minnesota – “waiting on Dutch”, but in a different context. Reagan’s stump speech serves as the antithesis to Carter’s “Crisis of Confidence” speech. He recognizes that there is an overwhelming anxiety about the state of the country, but unlike Carter, he doesn’t advise introspection. He actually doesn’t propose any sort of action to curb this malaise, just that everyone hunker down and think of the good old days. His anecdotes are pure Americana sentimentality, drawing on stories of the pilgrims and John Winthrop’s wish for America to be as a “city on a hill”. He suggests that America has a “rendezvous with destiny” and the world eagerly awaits for America to make that date. Even the most disillusioned, government-critical war veteran, Karl, wipes away a tear from his eye as Reagan finishes his speech.

As an audience nearly 40 years removed from the actual presidential term of Ronald Reagan, we know what kind of president he ended up becoming. We remember the ineffectiveness of a “trickle-down” economy, his ignorance of the AIDS crisis, or his promotion of the ugly stereotype of a “welfare queen”. But, the citizens of Luverne, Minnesota, in the years Before, see him as a tonal change, as someone who might be able to help the country. Or at least someone who will help them forget the anxieties inherent to modern American life.

Lou falls into the trap of wanting to believe in the promises and rhetoric in Reagan’s stump speech. When the two are alone, Lou finally reveals to Reagan the pent-up distress and anxiety that he’s been repressing in regards to his wife Betsy’s lymphoma. Up until this point in the season, both Lou’s father-in-law and his friends have tried to get him to open up about his mental state in the face of his wife’s bleak diagnosis. He has pointedly ignored these attempts, opting to talk about something else as a way to cope with the certainty of her death. Even when he talks to Betsy about how she feels or how he’s confident with the trial drug she’s on, he can’t come to terms with it. He turns to Reagan in a moment of vulnerability, asking him what to do about Betsy’s diagnosis, feeling as if “all the evil of the world” is somehow manifested in Betsy’s lymphoma. He is, perhaps without realizing it, caught up in the ideas Reagan has built his campaign around: that American perseverance alone can save you.

“I believe there isn’t a challenge that an American can’t overcome”, Reagan says to Lou. “Yeah, but how?” he responds, genuinely searching for an answer. He’s not looking for comfort. He’s looking for an action plan with clearly delineated steps. Marching orders. Reagan, unable (or perhaps unwilling) to find an answer that isn’t just patriotic drivel, pats Lou on the shoulder and quietly walks away, leaving Lou without the answer he seeks.

More so than any moment on the show, this illustrates the limits of American exceptionalism. Our characters find that they are not immune to the changing times and that even the changing of time cannot stop outside forces. Growing malaise will continue to fester, and sometimes it seems like all we can do is wait. The answer we seek for our troubles cannot be given in the form of a speech from a politician who aims to get elected.

In the final episode, Betsy, who suffered a fall as a side effect of nausea from her cancer medicine, recounts a vision-like dream that she had while in recovery. It is a direct reference to the monologue H.I. makes about a dream he has in the Coen brothers’ Raising Arizona, but in reverse. Whereas H.I.’s dream ends with happiness for his family, Betsy’s ends with uncertainty and chaos:

That night, I had a dream. It felt so real, even though I knew it couldn’t be. Or wasn’t, yet. I dreamt of a magical future filled with wondrous devices, where everything you could ever want was available in one amazing place. And there was happiness there. But then I saw farther still. Years, decades, into the future. I saw a handsome older man, his back still straight, visited by his children and grandchildren. People of accomplishment and contentment. But then, I saw chaos. The fracture of peace and enlightenment. And I worried the future I saw—magical and filled with light—might never come to pass.

Betsy’s dream is punctuated with images from the first season of FX’s Fargo, which features an older, retired Lou and their daughter Molly in 2006. We know that both of the realities in Betsy’s vision, seemingly diametrically opposed, come to pass. There can be both abundance and scarcity, happiness and tragedy, perfection and chaos. Confidence and crisis.

Fargo illustrates the cost of neglecting the specific trauma of existing in America in favor of America’s self-mythologizing, but it seems to offer no solution for the American crisis of confidence. If anything, the events of the season only add more reasons to be anxious about the state of the country and the world. The Gerhardts are almost entirely wiped out after a standoff with the police; Mike Milligan realizes that his hard work results only in a dead-end office job; Peggy faces imprisonment after Ed’s death; Lou knows that his wife will die (and if you’ve seen the first season, you know she does, too). We know these things are inevitable.

And yet, the season doesn’t end there in the darkness of ambiguity. In the final moments of the finale, Fargo takes the time to slow down to stillness, ending with the intimate warmth of the Solversons processing the trauma of the season. In the glow of their living room, Lou, Betsy, and Hank all sip coffee with one another, and all these collected tragedies seem to melt away, overpowered by the strength of their bond. They’re back together again, safe and sound, and that is what resonates.