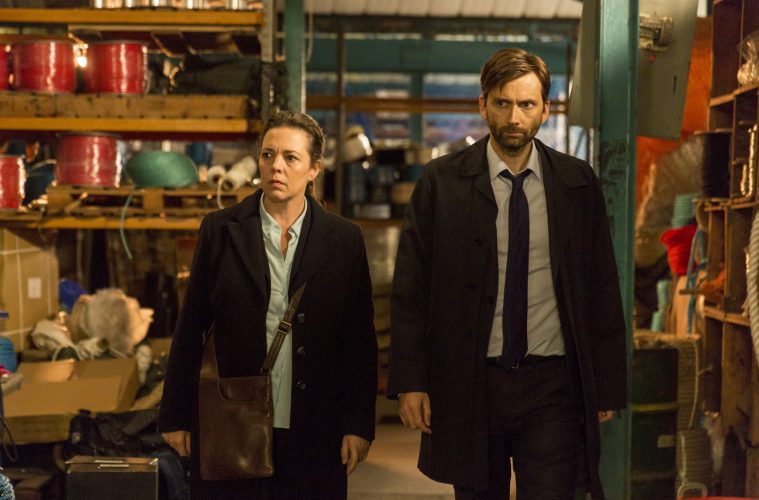 “Their Bodies Are Not Yours”: ‘Broadchurch’ and Sexual Assault

The police procedural will forever be a safe genre for television. No matter what show you look at, lawyers and the police will always be the heroes enforcing morality over criminal behaviour. The lines of “good” and “questionable” will be easy to identify, as the majority of the “good” characters will probably be white and male, while the “questionable” ones are often members of a minority group. The audience will be encouraged to view these crimes in only one way; doing drugs is unhealthy, stealing is immoral, murder is unacceptable, etc. Each episode will have a happy ending, casting the “good” and the “questionable” in their appropriate places: the “good” solve cases, while the “questionable” get thrown in jail.

As you can already see, the police procedural is a genre dependent on tropes. Shows like Dragnet have established these, while shows like Law and Order have perpetuated them into the 21st century. Shows like The Wire have begun to change this course of action by exploring the racial politics of the Baltimore crime scene, but it was not until 2017 that the police procedural fully revolutionized – with the arrival of the third season of Broadchurch.

Broadchurch first landed on screens in 2013 on British television channel ITV. Its first season surrounds the death of a young boy in the small town of Broadchurch in Dorset, England. Although the cast is star-studded, with actors like David Tennant and Olivia Colman, fans were initially impressed with the accuracy of the show. It demonstrated how real police stations worked and how legal and criminal processes affect the emotions of those involved in murders. The show subtly criticized these processes and how flawed the police force can be. This was proven through demonstrating that solving cases does not always mean that the “good” and the “criminal” are put in their right places, as a loving father and community member is found guilty of murder and put behind bars.

The second season continued this criticism by demonstrating how not every case can be “won” by the police, and how doing what is “good” can ultimately cause more harm to those directly involved. Broadchurch developed a promise to its viewers: to demonstrate the real emotions behind every crime, to criticize the methodologies of the police force, and to favour accuracy over dramatization. The third and final season, which aired in January of 2017, delivered on this promise in the show’s most hard-hitting approach yet.

The opening shot of the third season of Broadchurch is of a woman who has been beaten (played by Julie Hesmondhaugh), sitting quietly in a doctor’s office. She is shaking. After a couple of seconds, Detective Inspector Ellie Miller (Olivia Colman) steps in and asks her to take her clothes off so that the doctor may perform a few tests. The woman, though initially hesitant, agrees. She introduces herself as Trish. The doctor eventually steps in and tells her that “[her] situation is difficult, but [she] will get so many resources to help her through this. [She] will not survive this alone. The DIs want to talk to [her], but at [her] own pace”. She nods and mutters only a few monosyllabic words. Once Ellie and her companion, Detective Inspector Alec Hardy (David Tennant), come into the office, she says “I have been raped” – already setting up a complex and emotionally charged case.

Rape is not like any other crime that police procedurals usually focus on. Its effects are beyond physical, often causing severe psychological damage in the victim. Unlike theft, for example, the crime directly involves the victim’s body, rather than their assets. As far as criminal acts go, rape is among the most personal. This is why showing stories about rape on television is so hard to do. By including a rape story in a television drama, writers often sensationalize the act for dramatic purposes. This can be seen when writers use rape to demonstrate the raw power of a brutish ruler, like in Game of Thrones, or when they heavy-handedly suggest that young women should be careful in their sexual encounters, as seen on CSI. In almost every one of these rape scenes, it’s clear that writers will use rape to create drama and a feeling of helplessness in female characters.

Take Game of Thrones, which is infamous for using sexual violence in order to show the strength of men compared to their female counterparts. When Joffrey wanted to show his power over Sansa, he ripped off her shirt and ordered his guards to whip her until she cried. The takeaways from this scene are twofold: men can control women’s emotions as well as their bodies, and women are subjugated by men. Since rape appears so frequently on television, producing these same two takeaways, it has become a trope. In real life, however, rape is not a trope, but a traumatic and personal experience. 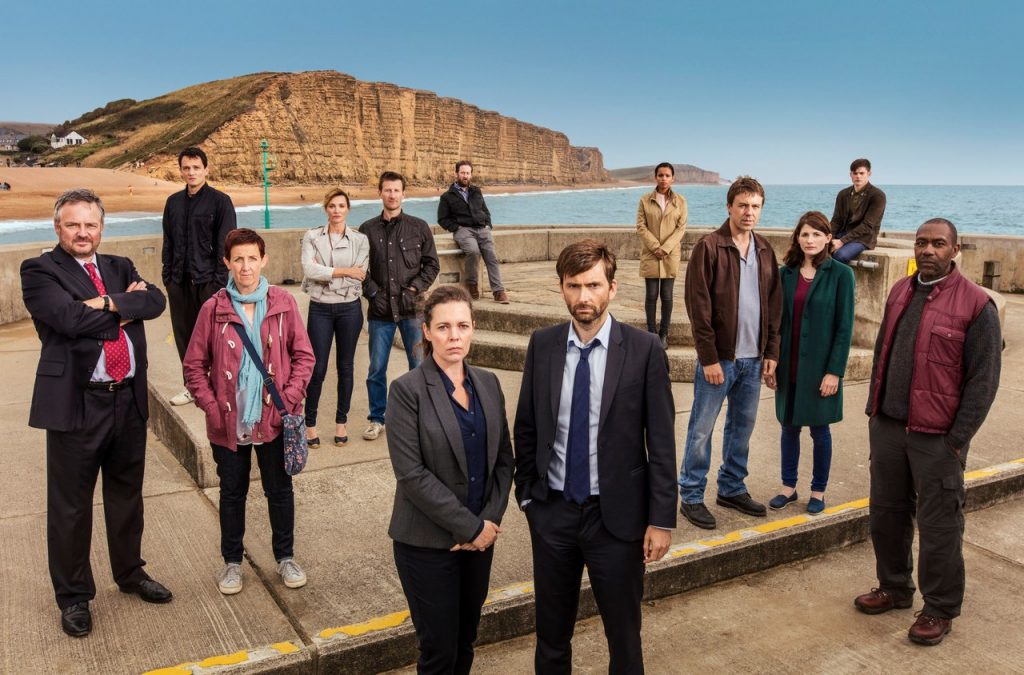 The cast of “Broadchurch” | Photo: The Telegraph

It is from these mistakes that Broadchurch learns. Instead of using the trope to create drama and helplessness in female characters, Broadchurch attempts to show the effects of rape and how it truly impacts real victims. Instead of focusing on the heroism of the police service for enforcing the law, the third season of Broadchurch focuses on Trish’s life as she copes with her trauma. It depicts events like her taking one minute and forty-one seconds overcoming her emotions to tell another person about her assault for the first time. Another scene shows her writing in her journal as she decides how she will tell her sixteen-year-old daughter what has happened, the camera emphasizing what she has crossed out. A later scene shows her withdrawing from work, as she feels embarrassed to see her friends again. Instead of favouring dramatic arguments and tear-filled drama, this show focuses on realism in how rape affects its victims. Even when the rapist’s identity is revealed, the focus of the show remains on Trish and how she handles learning that this person she thought was “good” had malicious intentions.

This show also does not focus on the legalities that surround rape, as shows like Law And Order do so often. When Broadchurch’s Hardy and Miller are discussing the case, they are often talking in social terms, trying to ensure that Trish can recover as they educate those around them about rape culture and how to stop it in their city. This includes multiple scenes in which they explain to a young police recruit how no person deserves to be raped, how rape should always be taken seriously, and how victims need to recover however they see fit. This show does its research. If you look at the credits for any episode in the season, you will see a list of psychologists, help centres, walk-in clinics, and national help lines cited under the category of “Writing Research”.

While creating a very real and accurate portrayal of rape, Broadchurch also attempts to create a message of hope for victims. Instead of using rape as a means to create drama, Broadchurch uses rape as a plot to explore means of recovery. Throughout the season, the police, though anxious to solve the crime, continue to reassure Trish that they will not ask her anything or go anywhere with her unless she is fully comfortable. The police also provide her with her own social support service, through the agent of Beth Latimer (Jodie Whittaker), a character who has survived trauma in previous seasons. In a series of heart-wrenching scenes throughout the show, we see Beth and Trish talking through Trish’s trauma. Trish asks Beth, “I don’t understand why it was me. I can’t live with it. Why did it have to be me?”, to which Beth responds, “We will get through this together. You have me. You can call me at any time”. At this point, Beth pauses and pulls out a sheet of paper, showing it to Trish. She lists off different hotline services and walk-in clinics that exist in the nearby area. As I was watching this, I googled these places to see whether the writers had invented them or not. They all turned out to be real, and their numbers were visible on-screen. In effect, Broadchurch has used rape on television for more than just a plot point, but also to educate viewers about recovery.

Broadchurch also encourages solidarity in combatting rape culture. Following Trish’s assault, the police supervise an event called “Women Take Back The Night”, in which all of the female characters gather in the city square late at night to light up their cellphones and show solidarity for Trish, who at this point in the show is afraid of judgement from her neighbours in the city. Trish sees this act of solidarity and understands that she can feel safe among her neighbours. Later on in the show, Beth confronts someone who states that they do not believe speaking out against rape culture will make any impact. She says, “If we keep acting this way, more bastards like the one who did this will get away! We must stand together and speak up for each other or this is never going to go away! We women are strong and can make a difference and you’re going to say no?!”, emphasizing the power that women have together. At this point, I realized what Broadchurch was aiming to do with this season’s plotline: forget the trope of rape as seen in police procedurals before it, and reinvent it to portray real trauma as it should be, spreading messages of hope and recovery.

After I had finished this season, I was left with a question: Why do so many male writers focus on telling stories about rape that are used to perpetuate drama, when they could instead be telling stories of hope and recovery through the trauma rape brings? The third season of Broadchurch has set an example for the future of the police procedural. It’s time to stop applying these narratives of the “good” and the “questionable” into very real crimes, and focus instead on depicting these traumas accurately. As Broadchurch portrays it, rape is a real event that happens too frequently and leaves victims with psychological scars that they are left to recover from. Rape is not a trope.