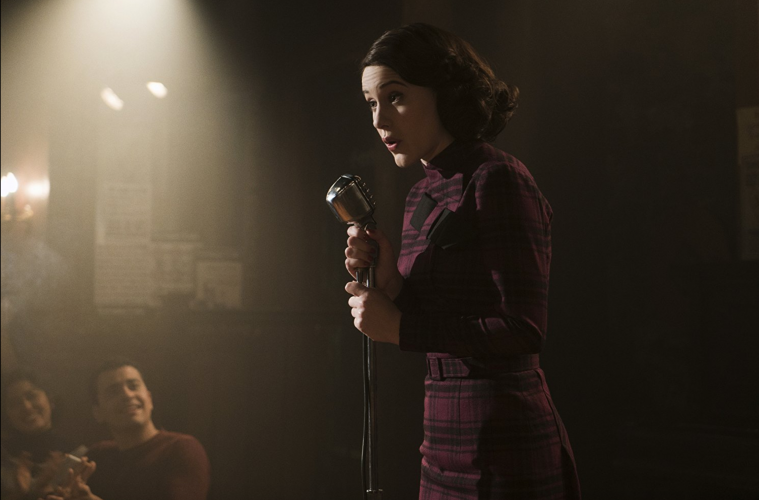 The Marvelous Mrs. Maisel is – as I told my mom in a recent Facebook message – fucking amazing. While I would usually hesitate to use such language for a review, the lead protagonist herself is known to drop some “f-bombs,” so really, I’m just borrowing language from the show to describe how marvelous it is.

The show tells the story of housewife Miriam “Midge” Maisel, played by the magnetic Rachel Brosnahan, and is set in 1950s New York City. Midge seems to have it all. A gorgeous apartment on the Upper West Side, two children, and a dutiful husband. After years of trying, she has finally snagged the Rabbi for her lavish Yom Kippur meal. But this lovely picture soon crumbles as Midge’s husband, Joel, dissatisfied with his life, walks out on her. In a mess of grief and rage, Midge ends up drunk at the nightclub Joel frequented in his lacklustre attempts to break into the world of comedy. Stumbling up to the stage, Midge seizes the mic and launches into a sharp, witty comedic routine – complete with flashing her breasts and miming sexual acts.

This is just the first episode of a brilliant eight-part season, and Midge’s act only gets better. The season follows her as she ventures forth with her newfound talent for stand-up – her street smart, take-no-bullshit manager Susie (Alex Borstein) at her side. Watching the development of Midge and Susie’s relationship is just one of the many great elements of the show, on par with the ups and downs of Midge’s early comedic career.

Beyond a fascinating dive into the New York comedic scene, The Marvelous Mrs. Maisel also shines a light on the lives of women in the 1950s. In one scene, Midge waits until her husband is asleep before creeping out of bed to remove her makeup, wrap her hair in rollers, and smear her face in cream. Carefully leaving a gap in the blinds open, she rises with the sun to reset her face before Joel wakes, offering him the illusion of a constantly perfect wife. Later in the season, we witness her mother Rose following the same routine, and realize that this is a tradition carefully passed down from mother to daughter. When Joel walks out, Midge is left to tell her parents alone. Upon hearing the news, Rose demands to know what Midge did wrong. Regardless of what occurred, it is clear in her mind that any marital problems rest solely on the wife. Midge is met with similar animosity as a stand-up comedian, where she faces loud declarations that women can’t be funny. Despite it all, Midge barges onward, working to become financially independent and continuing to perform.

The Marvelous Mrs. Maisel is the smart period show we didn’t realize we were waiting for. Speeding along with a fervour familiar to fans of the fast-talking mother-daughter duo of Gilmore Girls, Amy Sherman-Palladino has created another irresistible hit. It makes for delightful viewing, as we are swept up into the energy and grace of this housewife-turned-comedian. The show is, as benefitting a show about comedy, incredibly funny. From the stage of a seedy nightclub to the drama of moving back in with her parents, it’s constantly making us laugh.

Much of the show’s irresistible power must be attributed to lead actress Rachel Brosnahan. Dazzling as the carefully groomed, witty and smart Midge, it is impossible to look away when she appears on the screen. A further testament to her acting prowess is the Golden Globe she received for her performance earlier this month. In turn, Brosnahan is surrounded by an equally incredible cast. Tony Shalhoub, as Midge’s reserved mathematician father Abe Weissman, is particularly great, offering up a dry delivery that just gets better as his nerves become more frayed.

The Marvelous Mrs. Maisel is streaming on Amazon Prime, with the first episode also currently available on YouTube. However, I must caution the reader: Watching the pilot will inevitably lead to devouring the whole season. The show is funny, tackles 1950s misogyny, includes a dynamic duo in Midge and Susie, and features a gorgeous array of period costumes. What more could you need?