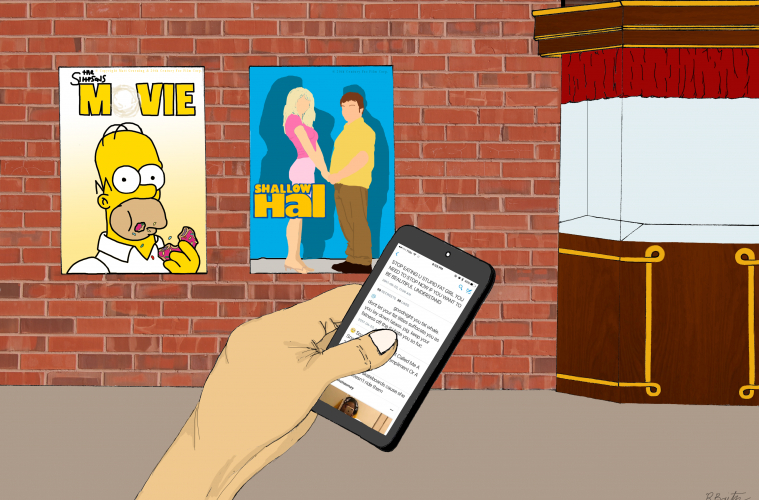 On the Plus Size: Why Negative Portrayals of Fatness Are So Harmful

My first memory of being ashamed of my body comes from the first grade. I was sitting at my assigned classroom table with my peers during a lesson, and my friend slid me a piece of paper asking if I wanted to come over on the weekend to go swimming. My six-year-old mind was immediately horrified at the thought of wearing a bathing suit in front of my friend. Grabbing a giant red pencil, I wrote down my reply in the only way my first-grade lexicon and spelling abilities allowed me to. My response to the invite was short and to the point: “I have big legs”.

I have always struggled with my body image – it’s an uphill battle I’ve faced my entire life. I have rarely been happy with what I have seen looking back at me in the mirror, and it has taken plenty of self-love over the last couple of years to come to terms with the body I have been given.

Throughout my life, I have actively tried to defy any stereotypes my plus-size body has been assigned. In high school, I wouldn’t eat in the cafeteria (or at school, period) because I didn’t want people to draw conclusions about me based on what I was eating or even why I was eating in the first place. I would lie about being cold so that I could keep a sweater on, when really, I didn’t want to show my bare arms to the public. I didn’t want to provide any extra ammunition to those around me – my plus-size body alone was enough to make me a potential target.

The lack of positive plus-size portrayals in popular culture has repercussions in this new media age. Fat-shaming on screen, whether done overtly or covertly, has taught audiences how to perceive, and react to, plus-size individuals.

We see this every day in the kinds of language used in online hate speech. How many times have you looked at the comments on a YouTube video, just to see some troll making a snide remark about the content creator’s body? Have you ever stopped to look at someone else’s Instagram comments, only to read wild accusations about the person based on their size alone? How about the conversations that took place on the former subreddit /r/fatpeoplehate? The slurs and comments hurled across these social media platforms are usually inspired by concepts that have been branded into our minds from years of exposure to various types of popular media.

From comedies to family dramas, no genre is safe from fat-shaming and fat-phobic content. Many programs situate plus-size individuals or the idea of fatness as something to mock.

For example, a common practice used against plus-size individuals is likening them to the size of whales. Using phrases like ‘man the harpoons’, or simply referring to a person as a whale, are two ways in which this slur is communicated.

Films and television shows are no strangers to this practice. In White Chicks (2004), Lisa (played by the slim Jennifer Carpenter) refers to herself as Shamu. A slim character referring to herself as the world’s most famous whale – in turn calling herself fat – is meant to be funny. In no way is Jennifer Carpenter plus-size, and the idea of her character worrying about her size seems absurd.

In the popular crime drama Monk, there is a character named Dale the Whale, a physically large, immobile master criminal, weighing in at just over 800 pounds. Dale’s nickname stems from his body mass, which allegedly emulates that of a whale. Films and television shows that perpetuate such slurs only teach viewers that it’s perfectly okay to disrespect and shame people, plus-size or not, for their size.

Films and television shows also tend to teach viewers that plus-size individuals are unintelligent and lazy. These two stereotypes are often present together in cartoons, whether it’s SpongeBob SquarePants or The Simpsons. Patrick Star, one of SpongeBob’s main characters, is a pink starfish who is overweight, not physically active, and not very bright. From nailing a plank of wood to his forehead to asking if mayonnaise is an instrument, Patrick Star perpetuates the idea of plus-size characters as unintelligent – so much so that his character is borderline obscene.

Moving into the realm of adult cartoons, we have Family Guy and The Simpsons. Both Peter Griffin and Homer Simpson lack common sense and are known to be lazy; their day-to-day actions are questionable and often burdensome to their families.

Of these two characters, Homer is the more notably inactive. In almost every episode of the show’s 28-year-long run, there is a scene where Homer is seen lounging on the couch in his living room while watching television. Throughout the show, Homer self-identifies as lazy and often cuts corners when completing tasks. In “Beware My Cheating Bart”, Homer is seen sitting on a chair that straddles a treadmill. In this seated position, he walks his feet across the treadmill. Homer Simpson is the epitome of on-screen laziness.

One of the most recent examples of a comedy that perpetuates this stereotype of laziness within the plus-size community is Pitch Perfect (2012), through the character of Fat Amy. Although she has reclaimed the word “fat” and is using it on her own terms, her character falls short because she exemplifies several of these plus-size stereotypes. Throughout the film, Amy makes her clear distaste for cardio known – most notably in the scene where she performs “horizontal running” while her fellow Bellas run up and down the bleachers. Her aversion to exercise is meant to be funny, but it’s really just another harmful, tired Hollywood stereotype. There is nothing new or revolutionary about the comedy at play here – the “it’s funny because they’re fat” trope is long overdue for retirement.

At the end of the day, I cannot stress enough that fat-shaming and plus-size stereotypes in media affect one’s perception of fatness. The way that audiences interact with the world around them may change based on what they learn through these productions. Across all genres and age brackets, fat-shaming and jokes about fatness are staples. They’re a way to get a quick laugh, to identify a villain, or to cause a character shame.

Constant exposure to such stereotypes breeds negative thinking, and even behaviour, when it comes to plus-size individuals. Comment sections across YouTube and Instagram, forums on Reddit, and @ replies on Twitter are littered with rude and spiteful comments addressing users’ bodies. Film and television have taught audiences that plus-size bodies are invalid and something to be mocked.

This leaves us with the question of what can be done? How can we, as both consumers and critics of media, bring to light the harmful stereotypes that exist within film and television? It’s important to talk about what we see on screen, and to speak up and out about problematic material. For all we know, the audience member next to us might be feeling the same way.