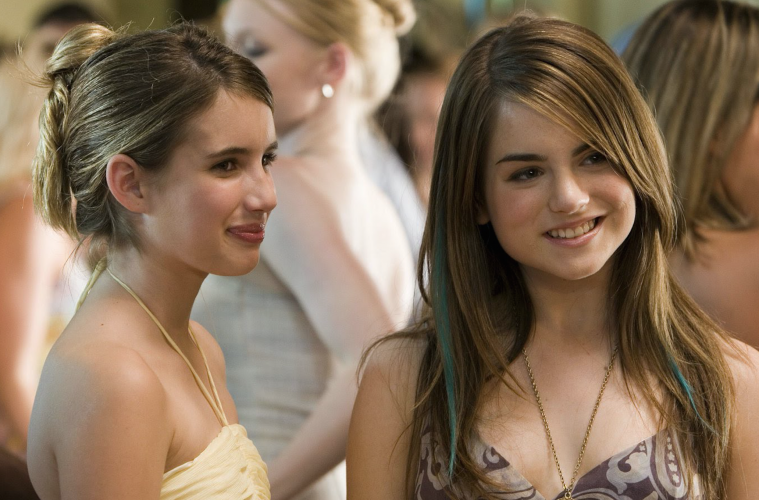 “It’s Good to Have Friends with Fins”: Tween Friendship in ‘Aquamarine’

I was eleven when Aquamarine was released in 2006. As a mermaid-obsessed preteen, I was definitely in the target audience for a romantic comedy about a young mermaid searching for love in contemporary Florida. While I can’t remember the first time I watched the film, I can promise you that it was at a sleepover. From its release, Aquamarine immediately joined the sleepover film roster, paired with such auspicious titles as Mean Girls (2004), A Cinderella Story (2004), The Princess Diaries (2001), Ella Enchanted (2004) and Sisterhood of the Travelling Pants (2005). Mermaids, hot surfer dudes, and talking starfish had my friends and me sold.

While the details of my initial viewing of Aquamarine are hazy, I do vividly remember my sudden and deep need for blue highlights, like the ones flaunted by the main characters in the film. This need continues today, even as I have come to accept that blue highlights will probably never look quite as cool without the fins.

Aquamarine offers more than just a nostalgic reminder of past sleepovers. By reframing Hans Christian Andersen’s The Little Mermaid and Disney’s animated film of the same title through the characters of Hailey and Claire, Aquamarine offers an interesting take on young girls and the friendships between them that merits a re-watch.

Aquamarine, loosely based on a children’s novel of the same name by Alice Hoffman, is a modern twist on Andersen’s tale, complete with shopping malls, beach parties, and fashion magazines. It takes cues from the usual light tone of Disney, yet the film is more interesting for what it adds to a classic heteronormative narrative, beyond musical numbers and happy endings. While the film takes its name from the mermaid character, whose desire for love with hunky surfer boy Raymond serves as a key driving force of the film, Aquamarine ultimately frames the classic mermaid story through the struggles and friendship of two ordinary girls.

Claire (Emma Roberts) and Hailey (Joanna ‘JoJo’ Levesque) are two twelve-year-old best friends who face being separated by Hailey’s impending move to Australia for the sake of her mother’s career. Unlike actors in many teen movies, Roberts and Levesque are believable preteens. Their outfits – particularly Hailey’s long cargo shorts and thick belt – look exactly like clothing I remember my sister wearing at that age. From the minute they appear on screen, the film is thereby endowed with a sense of reality that nicely contrasts its fantastical elements.

Anxious and worried about a future without each other, Hailey wishes for a miracle that might prevent her from moving. Her miracle comes in the form of Aquamarine, a mermaid on the run from an arranged marriage. Her father has given her three days to prove that true love exists; otherwise, she’ll be forced to marry. Learning that mermaids can grant wishes to those who help them, Claire and Hailey immediately offer to do what they can, determined to use their wish to keep Hailey in Florida.

The notion of prioritizing friendship between young girls over heterosexual romance is quickly established. Claire and Hailey agree to help Aquamarine catch the eye of Raymond, a lifeguard they spend the film’s first scene mooning over.

What follows are various attempts to bring Aquamarine and Raymond together. On the last of her three days, Aquamarine confronts Raymond, asking him if he loves her. The film injects a nice bit of comedic realism here, with Raymond awkwardly responding, “Well…I mean…we’ve had one date.” Then, mean girl Celia shows up and pushes Aquamarine into the ocean, just as her father conjures a storm to carry her back home. Despite Claire’s intense fear of water (both of her parents drowned), she and Hailey clasp hands and jump in after their mermaid friend. The scene is clearly codified for dramatic impact. While Raymond rushes off to grab his rescue board, Claire and Hailey act as the impulsive heroes – not letting rationality or the threat of danger stop them. The music builds to a crescendo as the two jump.

The drama of two twelve-year-olds swimming across stormy waters is then matched by the emotional intensity of the conversation that happens on a nearby buoy. The girls offer their wish – the one thing that might keep Hailey from moving – to instead save Aquamarine from her marriage. She replies that there is no wish, as she has not been able to prove love exists with Raymond. Hailey and Claire explain to the mermaid that they are her friends, and that they love her. This declaration between the friends serves as proof that love exists, saving Aquamarine from her father’s rage.

In the 1989 Disney film, the sea is similarly driven wild by the anger of a powerful sea creature. In Disney’s rendition, however, it’s Prince Eric who ultimately saves the mermaid Ariel, by impaling the sea witch Ursula on a ship. By prioritizing friendships between girls – declaring that the love between friends is as strong, if not stronger, than that between Aquamarine and Raymond, Aquamarine upsets the traditional, heteronormative narrative promoted by Disney.

By the time Raymond does show up, the sea has cleared, the day has been saved, and the girls are well into their teary goodbyes. Aquamarine and Raymond get their heart to heart – a vague promise of a future together and a kiss – but there is a sense that we’ve already gotten our big moment in the film.

Aquamarine doesn’t simply champion friendship between these girls. It champions realistic relationships between real girls. Over the course of the film, Hailey and Claire come closer to accepting that Hailey must move, and that they must learn to stand on their own two feet. The hijinks of the film serve as a vehicle for their character development, as they come to terms with the idea of a future apart. The film could have ended with Claire and Hailey together, since Aquamarine’s magic is clearly capable of accomplishing such a feat. By choosing instead to have the girls make the mature decision to save their wish, which also allows Hailey’s mother to pursue her dream job, Aquamarine provides a realistic ending to a fantastical story.

Today, as a twenty-one-year-old, I appreciate the film’s ending more than ever. Though Hailey is moving, she and Claire will surely continue to be friends and see each other again one day.

I just finished my undergrad and now am forced to part from close friends as I venture into the world. Having a film text address this experience (especially one with mermaids) helps me come to terms with this difficult change.

Yes, Aquamarine is a movie for tweens and it has its flaws. But it is so much more than just a tween film. Like the almighty sleepover, Aquamarine represents and promotes friendships between young girls. The fact that the film accomplishes this in an adaptation of The Little Mermaid, a story traditionally driven by a heterosexual romance, makes it even more impressive.