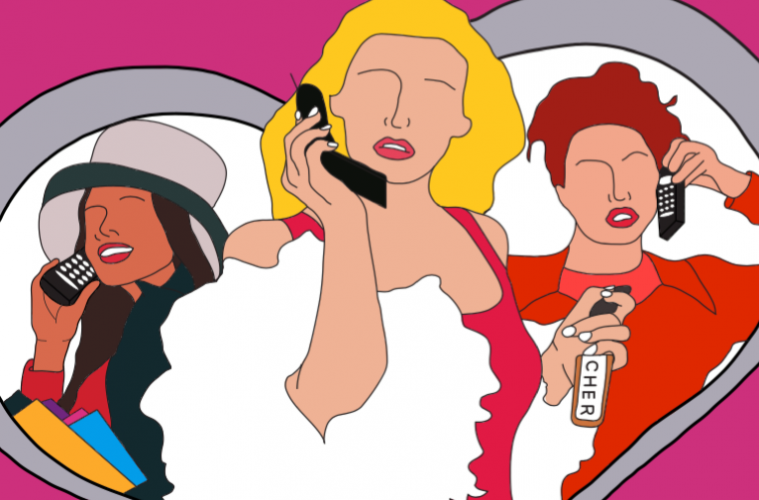 “Did I Stumble Into Some Bad Lighting?”: Revisiting the Fashion and Friendship of ‘Clueless’

Forever 21, the California-based retailer, recently started selling items that bring us back to a time before social media; a time when over-the-knee socks, fuzzy pink sweaters, and electric blue eyeliner were deemed as necessary items in every fashionista’s wardrobe. While I was born in 1994 and did not get to experiment with the decade’s fashion trends — I was too busy learning how to sit on my own, tie my shoes, and form complete sentences — I found myself attracted to the the decade’s chunky heels and exaggerated straps because of my obsession with the Spice Girls and Clueless (1995), Amy Heckerling’s modern-day retelling of Jane Austen’s 1815 romance, Emma.

Clueless tells the story of sixteen-year-old Beverly Hills native, Cher Horowitz, and her quest to find love for both her friends and herself. Like Emma’s titular character, Cher takes on the official role of matchmaker after successfully pairing two awkward and lonely teachers. When Tai Fraiser transfers to Bronson Alcott High School in the middle of the school year, however, Cher sees her as a “charitable opportunity”. Cher and Dionne attempt to give Tai a makeover to make her more appealing to Elton Tuscia, the resident bad boy, but things do not go as planned when Elton rejects her, presumably due to her past sexual experience, poor upbringing, and street knowledge.

Cher, now seeing Tai as a lost cause, leaves her to fend for herself while she attempts to capture the attention of another transfer student, Christian Stovitz. She tells her friends of her plan to “do it” with him, which backfires when Christian’s homosexuality is revealed. Things seem to go on a downward spiral from here on out. As in Emma, however, Cher manages to make up for all her wrongdoings by staying true to herself, coming clean, and looking good.

If it seems like Cher’s character pays more attention to her outfits than her relationships, it’s because extreme care was taken in the way she was presented in the film. While not all of Cher’s outfits were designed by high fashion houses like Calvin Klein, Alaïa, or Dolce & Gabbana, they were chosen by costume designer Mona May — who also designed Julia Roberts’s red dress in Pretty Woman (1990) — to emphasize Cher’s emotions and her growth. We are first introduced to the film’s protagonist while she frantically searches for her “white collarless shirt with red seagulls”. This is something that we have all struggled with before: being incapable of finding the one item we so desperately wanted to wear out. She calls her best friend, Dionne Davenport, who quickly helps her decide what to wear. (Another thing we have all done.)

When she finally does make it to school, we see that she is wearing the now infamous yellow Dolce & Gabbana skirt suit. I say ‘the’ and not ‘a’ yellow skirt suit because it’s now an iconic outfit in film history. As she walks next to Dionne, we realize two things. First, that we have two matching plaid skirt suits paired with typical 90s accessories: over-the-knee socks, giant hats, and Mary Jane shoes. Second, that the two friends are named after music legends whose outfits not only pushed boundaries, but reflected their individuality. 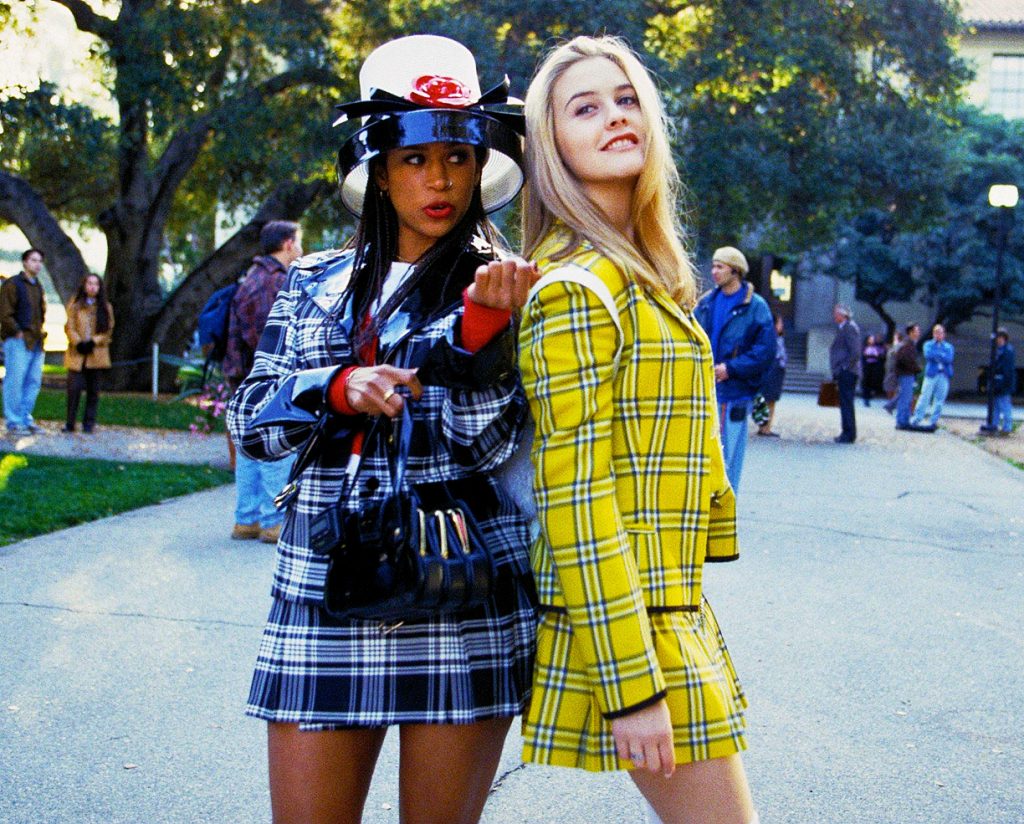 Cher and Dionne’s outfits go beyond what one could ever imagine. While most high schoolers in the 90s dressed in baggy clothes and “in a masculine fashion” (like Tai at the beginning of the film), the female protagonists of the film dress in a way that displays their flirty innocence, their love for all things branded, and their support for one another. Their long-term friendship not only enables them to complement each other perfectly, with the pair seen wearing something similar in almost every scene they are in together (like a headband or a purse). It also allows them to display their loyalty and dedication to one another as women. For instance, when Dionne drives on the highway for the first time and nearly kills them all, Cher is there to comfort her. And when Cher’s popularity is threatened by Tai, Dionne is by her side, telling her that she would never do anything to ruin her reputation, no matter the circumstances. In essence, Cher and Dionne never let each other walk out in public in an ugly hat, and would give each other snaps of approval for walking around in daring (yet expensive) outfits.

Conversely, the similar outfits also display how different they are from one another. Dionne is Black and brutally honest, while Cher is white and clueless at times, often mispronouncing simple words because she cannot be bothered to actually learn them. Cher’s outfits are cut differently than Dionne’s because she is a virgin (who can’t drive) and not expected to look and act a certain way. Even romantic comedies include such stereotypes of Black women. Cher’s outfits are longer and cover her body more — to create an aura of innocence — despite primarily consisting of miniskirts, pumps, and knee-high socks. It is not until she starts to actively pursue men that her outfits become shorter and tighter (cue Alaïa and Calvin Klein), whereas Dionne’s become more conservative.

Mona May’s costuming shift between the two girls is strategic. She wants our focus to shift from one character to the other whenever something important happens in that character’s life. We immediately notice that Cher’s outfits go from cute to seductive when she’s on the hunt for a man, but we also notice that Dionne’s outfits go from flashy to conservative when she becomes more confident in herself and her relationship. In essence, the girls either cover up or show off when they feel it necessary to do so, as every outfit plays an integral role in both the story and the characters’ development.

Clueless was released in theatres over two decades ago, but its overall message of looking good while doing good and keeping it real with those who stay true to you, still remains relevant in the age of social media. After all, how else would we know we could rely on our friends if they didn’t tell us that our shoes didn’t match our dress?