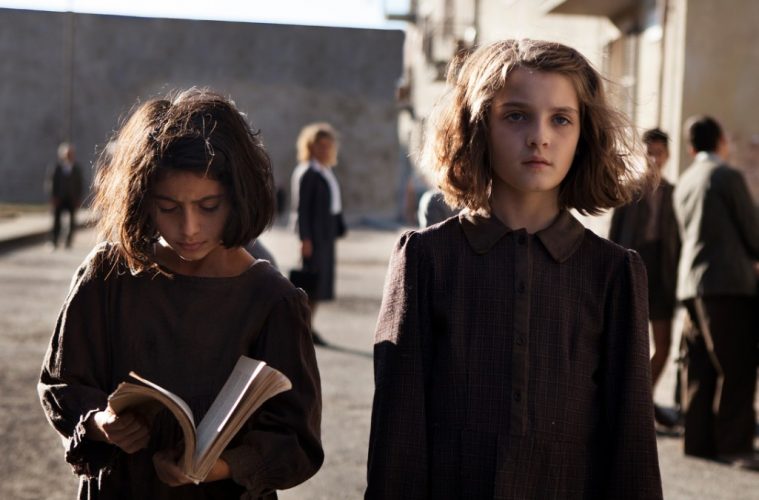 The Brutality of Friendship in HBO’s ‘My Brilliant Friend’

“We were twelve years old, but we walked along the hot streets of the neighborhood, amid the dust and flies that the occasional old trucks stirred up as they passed, like two old ladies taking the measure of lives of disappointment, clinging tightly to each other. No one understood us, only we two—I thought—understood one another.”﻿

This passage is one of many in which Elena Greco, the narrator and protagonist of HBO’s newest series, My Brilliant Friend, based on the highly-acclaimed Neapolitan Novels by Elena Ferrante, describes her lifelong friendship with Lila Cerullo.

Through these passages, we come to understand the unspoken bond formed between two girls who become as close as sisters, the frustration that surmounts as they grow up and one makes impulsive decisions that the other can’t understand, and the rarely spoken-about jealousy that forms when one person seems to always be one step ahead.

The dynamic between Elena and Lila is likely one that most women are familiar with, having experienced only once or twice in a lifetime; which explains why, despite its foreign location, language, and time period, My Brilliant Friend has resonated with so many.

The eight-episode series is narrated by adult Elena, a successful writer who we meet at the beginning of the first episode. When Elena learns that her old friend has disappeared, she starts writing about their life together and we are transported back to the 1950s in Naples, Italy.

Elena meets Lila at school and they form a bond based on their shared intelligence and desire to escape the hardships of their impoverished neighbourhood. Elena is already well on her way, being at the top of the girls’ class, but is taken aback when Lila begins to excel in all subjects; demonstrating an understanding that is miles ahead of her classmates, including Elena. Lila is often praised by their teacher, much to the chagrin of Elena, who uses her jealousy to motivate herself to do better.

“I remember that was the day I realized that if I always followed her, at her pace, my mother’s limp would stop threatening me. I had to behave like that girl, and not let her out of my sight.” — Elena Greco, My Brilliant Friend

There is an ebb and flow to Elena and Lila’s friendship that develops early on. Lila is a stubborn spitfire who rarely thinks about her decisions and runs towards danger. Elena, meanwhile, is quieter, observant, and doesn’t seek excitement the way Lila does. Elena knows that Lila is better than her at everything and tries to keep up with her, while Lila is desperate to prove that she is unaffected by the violence and brutality of their neighbourhood.

Despite the competitive nature of their relationship, Elena’s is often the only opinion that Lila will consult. Perhaps Lila knows that her friend will give her honest opinion without ulterior motive, unlike the other girls in the neighbourhood who see the strikingly beautiful Lila as their biggest competition in the war to win over the Solara brothers, who are part of the richest family in town.

Unlike those girls, Lila refuses to use her looks or body as a weapon to escape, but her family’s financial struggles force her to quit elementary school and start working at their shoe store. While Lila and her brother, Rino, secretly work on their own shoe designs, hoping to become rich, Elena continues on to middle and high school, earning top marks in all her classes.

It becomes clear that Elena’s successes bother Lila, likely because she grieves the life that she could have lived had she not been forced to give up her studies. She would never admit this to Elena, though. Instead, she secretly borrows books from the neighbourhood library and teaches herself Latin and Greek, which Elena hasn’t even begun learning in school yet. This is Lila’s not-so-subtle way of letting Elena know that it doesn’t matter that Elena is in school while she is not; she will always be better than her.

Elena, however, understands a lot more than she lets on, and often sits back while the action—most of which involves Lila somehow—unfolds. Lila provides Elena with an excitement that she otherwise would never seek out herself. In turn, Elena’s calm nature tempers the flames of Lila’s wild impulsivity. Lila makes decisions in haste and stubbornly sticks to them, even when others attempt to prove her wrong. When no one seems to understand her, there is Elena with a thoughtful, heartfelt explanation of her friend’s motives, diffusing the situation with her words.

Their unspoken bond is present even when they are fighting (which is often), and, much like many complex relationships between women, their friendship is far from perfect. Lila can be downright cruel in her delivery, and her scathing comments often leave Elena confused and in tears. While Elena’s constant comparison of herself to her friend keeps her on her toes, it can’t be healthy to not have a sense of self that is separate from her. In believing that she will never be better than Lila, Elena never gives herself the chance to be.

Female friendships are often represented via one of two stereotypes on-screen: girls are either extremely close, always supportive and understanding of each other; or they are secretly jealous, vindictive and spiteful behind each other’s backs. Rarely do we see that they are so much more than even a combination of both.

What the show gets right is that female friendships can be brutal; women’s cattiness can be more harmful than the machismo behaviour of the men in the neighbourhood. Sometimes, women can hurt each other without realizing it (or, in Lila’s case, on purpose), or we can dissect another’s actions—the way one says something or perhaps what they didn’t say—to such a finite degree that we drive ourselves to believe the worst of each other. We often don’t realize that something as seemingly insignificant as a glance or remark can deeply wound another person. In Elena and Lila’s case, since they are usually so close and on the same page, the slightest sign that they are out of sync can send both of them into a tailspin.

Though a lot of this realism is born out of Ferrante’s beautifully-written novels, the television adaptation amplifies the feeling through little glances and smiles between Elena and Lila, indicating their special ability to communicate without words. And at the end of the show, when something tragic happens to one of them, the camera focuses on the other, who is reacting as though it were happening to her, too. They understand each other’s pain in a way that is unselfish, altruistic even, and although this is more obviously true about Elena, Lila displays a deep understanding and desperate need to have Elena in her life underneath her prideful bravado.

The show beautifully captures the essence of Ferrante’s beloved novels, and while it doesn’t stray too far from its source material, it is imbued with fresh and sincere perspective. A cast comprised of mostly first-time or unknown actors, most of whom hail from Naples, only adds to the authenticity. The tension is handled wonderfully: It builds at a rapid speed, allowing enough time and explanation for newcomers to understand the layered dynamics of the characters and the neighbourhood, but also leaving those familiar with the material wondering what will happen next. It will be a long, brutal wait for My Brilliant Friend—which has already been renewed for a second season—to return, but if the first is any indication, it will be well worth it. In the meantime, this writer suggests a viewing of HBO’s documentary about the making of the series, titled My True Brilliant Friend, which gives a behind-the-scenes look at the casting, rehearsal, and filming process as well as a look into the true relationship between the actresses who play the teenage versions of Elena (Margherita Mazzucco) and Lila (Gaia Girace