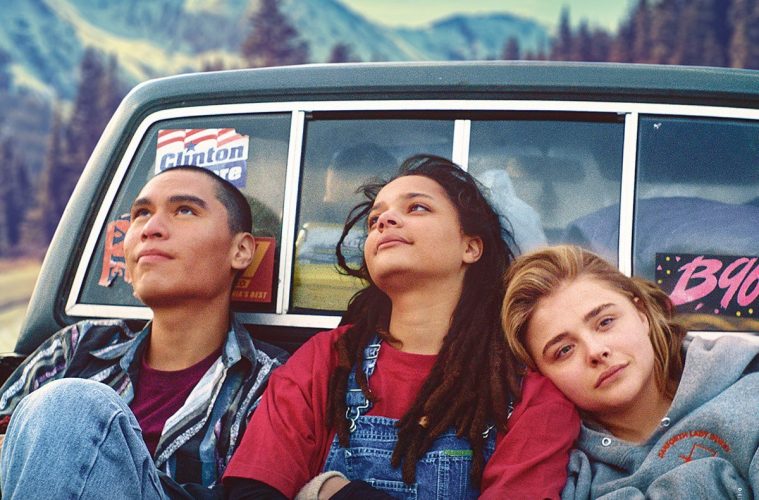 Photo: Much Ado About Cinema

I am sat alone, knees to my chest, my eyes tracing the screen before me. Cameron Post, her hair choppily cut in the style of so many of my lesbian friends, leans her head on her friend Jane Fonda’s shoulder. There is no romantic incline in this gesture – it is an act of comfort, each girl’s appreciation of the other’s presence. Next to Jane sits Adam Red Eagle. Moments before, the girls had been teasing the two-spirit person for their attraction to a nearby biker. For once, the attractions of these teenagers have led to laughter, rather than tears. The mutual understanding between the trio is palpable. They are moving forward together, departing a world that categorises them as “other,” and – in Cameron’s case – leaving behind a complex and painful romantic entanglement.

In this scene, for the first time in my twenty-three years of living, I see my own experience of sexuality reflected back to me. Before I get shouted down: this is not a criticism of LGBTQ+ cinema. The quality of output from our community in recent years has been incredible, yet through Carol and The Handmaiden, through Disobedience and Blue is the Warmest Colour, my appreciation still felt somewhat distanced. I adore these films for the stories they tell – but they do not tell my story. They tell stories of personal identity through romantic discoveries, through gentle kisses and innocent touches, through the exploration of bodies and spitting in each other’s mouths. These stories are essential to the cinematic representation of our sexuality – but they do not tell my story. I, like Cameron Post, did not affirm my personal identity with the help of a romantic partner. Instead, it is the Jane Fondas and Adam Red Eagles of my life whom I credit with my emotional development.

Platonic friendship forms the backbone of The Miseducation of Cameron Post’s multi-faceted story, and it’s a strong element of Cameron’s character arc. At the film’s beginning, Cameron’s sexuality is known only to herself and to her secret love interest, Coley – a relationship that quickly turns sour when the pair are discovered together, and Cameron is whisked away to a Christian conversion camp. Her heart is broken and her understanding of herself fragmented even further, but the answer to her troubles is not found in Coley, or even in another love interest. Instead, it is found in the friendship of Jane Fonda and Adam Red Eagle, two self-assured individuals who attempt to avoid the teachings of God’s Promise. Just as other lesbian characters test the waters of romantic relationships, Cameron finds her own path through their friendship, and it is here that Desiree Akhavan’s quiet masterpiece finds its brilliance. She finds her happiness through jumping on tables and singing along to the radio, and her reassurance through tentative discussion about their identities. She finds people who are like herself and – exemplified through a final shot that sees the three driving off together – finds a happy ending not in Coley’s arms, but in the contemplative company of her friends.

One of the most memorable scenes in Cameron Post finds five teenagers from across the LGBTQ+ spectrum peeling potatoes together at God’s Promise. These individuals have little in common save for their shared trauma, but in this scene of everyday chores, they find joy in each other. Jane switches the radio on and “What’s Up” by Four Non Blondes begins to play. As Cameron starts to sing along, the faces of the teenagers light up with smirks; such a carefree activity loaded with spontaneous immaturity is exactly the remedy they need. For once, there is no self-consciousness. As Cameron leaps onto the table at Adam’s command, all of their trouble seeps away, and they are allowed to be the adolescents they are. Even the quiet and meek Helen joins in, to Cameron’s delight. “Come on, everyone,” she shouts. In this group slowly bonding together, she is a born leader.

This scene is the pinnacle of the “queer” experience: in an environment designed to produce self-hate, we band together and strengthen each other. Our same-sex attractions and our gender identities may be the cause of our individual labels, but as a community, we are defined by the ways that we support each other. Like Cameron, and Jane Fonda, and Adam, we have all been the sad, lonely teenager looking for a friend to sing along to the radio with. We have all sought comfort in the knowledge that there are others out there who share our trauma, our uniqueness, our attractions, and our identities.

Teenage gay characters, however, will usually be surrounded by straight friends (see the wonderful Love, Simon for an example of this), or, alternatively, struggle to find friends at all. My own adolescence certainly mirrored this; high school doesn’t exactly leave gay children with many options to make friends like themselves. Like Cameron, it was when I left the confines of my hometown that I discovered myself. It was not the stolen kisses of my teenage years that truly defined my identity, but the deep, 3 a.m. talks with my bisexual housemates; the first time I stepped into a room full of gay people and knew that I was home; the lesbian karaoke nights listening to the people I love scream the soundtrack to my life. Like Cameron, the realisation of my attraction to women was a central part of my life, but it was only through the assistance of other LGBTQ+ people that I settled into a community that would never again allow me to feel lonely in my sexuality. Through Cameron’s eyes, I can see my own view of the world; a world where, even through the toughest of times, there will always be a wide-open road to follow, and the shoulders of my friends to lean on.