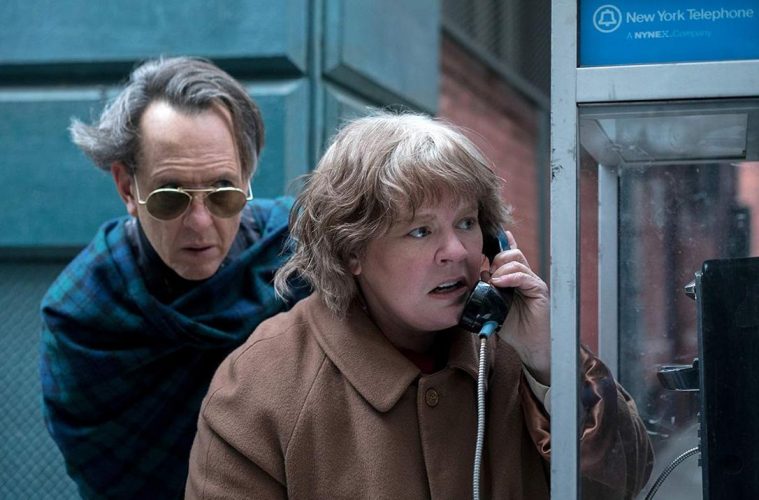 Power in Subtlety: Exploring the Queer Life-World of ‘Can You Ever Forgive Me?’

Marielle Heller’s 2018 film, Can You Ever Forgive Me?, chronicles a short time in the life of best-selling literary biographer, Lee Israel, as she adopts and embodies the voices of literary figures in order to impersonate them in letters. Money is tight, her cat is sick, and no one wants to read another literary biography, so she uses the letters she crafts to trick collectors into paying her rent. Although the film centers on Israel, an out lesbian, and her unlikely friend, Jack Hock, a gay man, queerness in the film is often subtle and read between the lines. This kind of elusive but ever-present queerness is both the delight and devastating undercurrent of the film.

Power interacts in complicated and often contradictory ways throughout Can You Ever Forgive Me? on the levels of both interpersonal and institutional politics. Although Israel is a successful literary biographer – she notes in the film that she has had a book on the New York Times bestseller list – she never writes about herself. She is always a kind of spectral presence, lingering right behind the words – or between the lines – but never revealing herself. And though I do not want to cast this film as a “coming out” story, because it certainly isn’t, Israel engages in a kind of bringing-out process of these literary figures in her letters.

So many of the literary figures she writes about were queer but unable to display that aspect of themselves because of pervasive and institutional homophobia. Israel manipulates her own powerful writing talent by taking on the voices of these figures to literally trick a community of rich collectors into paying her rent. At one point, she even meets a collector who believes in the validity of a letter she wrote as Fanny Brice, saying that no one has or ever will write like her. Israel cheekily sends the collector a letter from “Fanny Brice beyond the grave.”

But this bringing-out process is the very thing that leads to her undoing. By being simultaneously too out in portraying these figures and not out enough herself – never writing about herself, in fact – she is found out and subsequently investigated by the FBI before being charged in court.

This kind of contention of power is elaborated on throughout the film. Its characters are not the kind we typically see in queer media texts. They’re not conventionally attractive, having wild sex with multiple partners, or even part of a tight-knit and insular queer community. Their lives lack the kind of romanticization we’re accustomed to seeing – I’m looking in particular at the straight folks watching Bohemian Rhapsody (2018) and longing to live in the 1980s. Underlying all of Israel’s writing is her own lesbian identity. But in 1991, when the film is set, a kind of mundane, non-salacious, older queer experience might not be the kind that sells books, especially when tangled up with the institutional powers – both legal and literary – that precipitated the hiding of the figures she impersonates. Israel cannot, or does not, make known her identity through her writing, but engages in a bringing-out of writers of the past.

Ultimately, this bringing-out of other writers is what allows her to write about herself. After everything has panned out, she meets Jack in a bar and asks his permission to write about their story – forging and selling letters, bargaining with collectors, getting around Israel’s ban from sellers. Jack is dying, like so many other folks in 1991.

What I admire so much about Can You Ever Forgive Me? is the way in which queerness, or gay life, is so central and yet so subtle. The film has a devastating undercurrent as spectators often have to read between the lines or catch visual cues. When Jack and Lee’s friendship begins, they sit in a sparsely-populated gay bar, the only identifier being the leather-clad barback. On the window in the background of the shot, there is a sticker of a pink ACT UP triangle. In the same bar, Lee tells Jack of her new “work” and asks him not to tell anyone. He answers, “Who would I tell? All my friends are dead.” Outside of the bar, nearly every character the protagonists come into contact with seem queer. Can You Ever Forgive Me? elaborates a queer life-world that is never too blunt, too corny, or too romantic. It simply exists in front of spectators who can take the hint – or not. And this isn’t to say that Can You Ever Forgive Me? is one of those films that makes spectators work to find the gay; the film just allows these people and this world to exist without justification or retaliation.

I think it is also important to note that there is a kind of powerful cross-community friendship happening throughout the film. This is a point that my friend Erin (who I’ve previously mentioned on this site) and I were taken by. Often, when we read histories or watch media about queer people, especially set in the time of the AIDS crisis, there is a focus on the radical politics and organizing of gay white men. In the history of the crisis, noted by scholar Ann Cvetkovich in her chapter “Documenting ACT UP’s Lesbians,” lesbians and other community members are often excluded and therefore erased from histories of organizing and the community writ large.

In Can You Ever Forgive Me?, Jack Hock grows to be a friend, a confidant, an accomplice, and a comfort. Although neither of the protagonists seem directly implicated in community organizing – at least throughout the duration of the film – it is interesting to see this relationship between a lesbian and a gay man develop. They share some kind of common identity and common history, having presumably both been affected by their identity positions and the crisis, and yet still acknowledge the differences between them. They are unlikely friends who build a cross-community relationship; one with both loving and tumultuous aspects.

And this cross-community care is another reason why I think Can You Ever Forgive Me? is so powerful. The film drops spectators into this subtle queer world wherein “community” is extremely loose. It elaborates on the ways in which we might live in a queer world, but that queer world is not as tight as it’s been imagined to be. The protagonists navigate power in subversive (i.e. writing forged archival letters) and damning (i.e. structural homophobia and government negligence during the time of the crisis) ways. Can You Ever Forgive Me? then becomes a nebulous matrix of queer life, attachment, struggle, and joy in the subtlest, most understated, and simultaneously devastating ways.