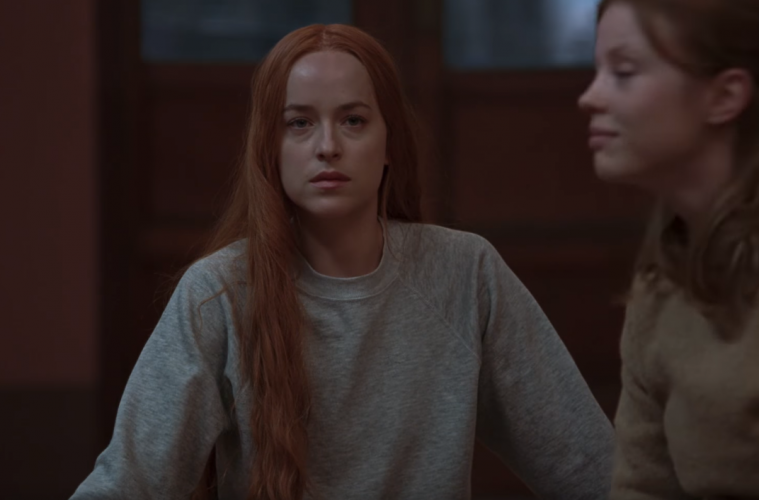 Review: Luca Guadagnino’s ‘Suspiria’ is an Ode to Susie Bannion

Susie Bannion, in both Dario Argento’s Suspiria and Luca Guadagnino’s remake of the film, is an innocent, wide-eyed girl from a small town in the US. “Susie Bannion decided to perfect her ballet studies in the most famous school of dance in Europe,” as the narrator informs us at the beginning. But Susie will find out that the dance school is a cover for something much more sinister: a coven of witches. So far, 1977 Susie and 2018 Susie are living the same narrative, and yet the way in which they let this narrative affect them couldn’t be more different, and ends up being crucial in Guadagnino’s unmaking and remaking of the film.

Dario Argento’s Susie is a good girl: she’s naïve but smart, and with firm beliefs. She’s at the school to dance, and she is happy to be good enough. When she senses that something is wrong, she investigates, but keeps everything at a distance. She’s repulsed, more than she is fascinated, by the evil underground forces that run the academy, and she wants to get closer to them only to annihilate them. She walks away smiling from the school in flames, along with the crazy witches living in it; the evil has been defeated, the risk of contamination avoided, and Susie can go on being a normal person. She’ll probably find a good job and forget everything about it, repressing memories of her time at the Academy until they resurface in a session with a therapist, who’ll deem her old and delirious.

Luca Guadagnino and Dakota Johnson’s Susie is not a good girl, and she is certainly not satisfied with being good enough. She might be from a small town in Ohio, but she’s secretly hitchhiked her way to New York before, abandoned her dying mother to go dance in Berlin, and inadvertently disfigured another dancer during her first audition. And all before even being admitted to the Markos Dance Academy! What comes later will prompt her to not only accept her most devious impulses, but explore them and lean into them to achieve greatness.

Susie’s dark side is something that is only hinted at in the original Suspiria, and even then, it comes up only as self-defense, and as a direct consequence of the danger that she feels she’s in. The new Susie is enamored with her own darkness and fascinated with the one surrounding her. This early acceptance facilitates the exploration of the complex mythology surrounding Suspiria’s core inspiration (i.e. witches and the neopagan Triple Goddess as imagined by Thomas De Quincey, in particular). In fact, whereas in Argento’s interpretation of it, the three witches are posited as enemies, in Guadagnino’s film, they become mothers in every sense of the word. Which means that, while the basic plot remains the same, the story is completely different.

2018 Suspiria uses the original as a blueprint, and overcomes its premise by letting us into the coven, through Susie. The Markos Dance Academy, in the hands of Guadagnino, becomes a palace of nightmares, which nonetheless exercises an irresistible pull – drawing her to its most hidden corners and allowing us to be subjected to its inner workings. The face and the body of the Academy, personifying its sense of danger and eerie beauty, is that of Madame Blanc (Tilda Swinton). Blanc moves as lightly as a ghost, emanating a freezing aura of inaccessibility alternated with the touch of a nurturing mother. She seems impossible to impress, which only makes Susie want to try harder, and demands total devotion, which Susie is ready to give her. The scene of their first meeting, during Susie’s audition, is like a terrifying meet-cute: Susie’s way of dancing is so visceral, so powerful, that it calls Blanc from across the school. She virtually teleports into the room, seeming to stare right into Susie’s soul and finding, for once, exactly what she wants. Susie, too, seems to finally see herself in the eyes of Madame Blanc: she’s discovering a side of herself that’s always been repressed, but is exactly what Blanc is cherishing. And just like that, the bashful Susie Bannion from Ohio is gone. She was never really there in the first place.

While in Argento’s original, the discovery that the school is a coven comes at the end, and constitutes the shocking but revelatory climax of the film after the strange happenings that lead up to it, in the new Suspiria, we know from the beginning what we’re dealing with. Susie herself doesn’t know for sure, but she feels that something is off. And she loves it.

The school and Madame Blanc give her a power that she never knew she had, and she’s completely inebriated by it. She grows more confident by the day, allowing Blanc to mold her only until she is strong enough to exercise her power herself. The pain that she’ll have to go through doesn’t hurt her: it’s both pain and joy. The nightmares that Blanc puts her through won’t stop her: they’re a source of terror and ecstasy at the same time. Through her, she has the possibility to push herself and become what the original Susie was only in potential.

Guadagnino is so fascinated with Argento’s film that he respects its plot but sees in it so much more than what was on show in the 1977 film. He goes deeper and larger, dwelling on psychology, history, and female empowerment, and the result is a stunning but disturbing tale of growth and acceptance. What the original plays as bizarre and occult, the new Suspiria treats as disturbing but seductive. The occult lives in each of the dancers’ bodies, and is something that can be accessed if one is only curious enough to give in. Dakota Johnson’s Susie is a testament to the fascination with darkness that lies at the core of Suspiria, and which makes this new instalment even greater than the original. The film is then, effectively, an ode to Susie Bannion, which culminates in a spectacular, ultra-violent sequence that she dominates with grace and total confidence. Luca Guadagnino gives her the tools and the space to be the protagonist of her own story. Susie Bannion is intriguing. Susie Bannion is powerful.

Susie Bannion is she.