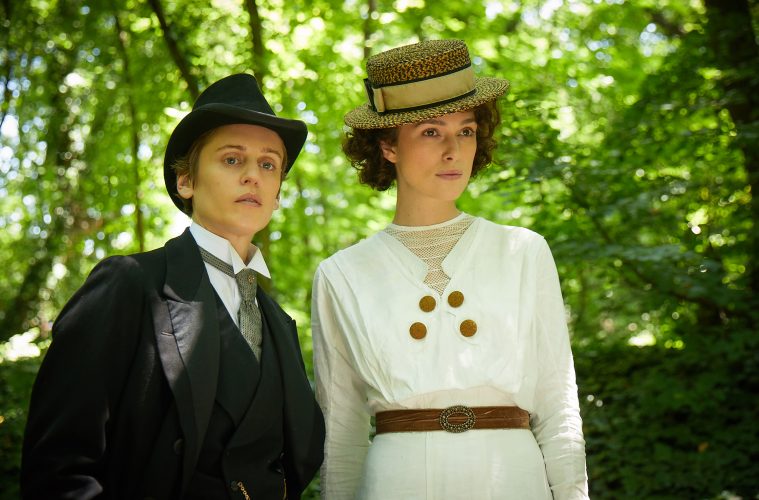 Review: ‘Colette’ is a Tale of a Woman Finding and Claiming Her Voice

Many great things have come out of the most recent wave of feminism. For starters, women are finally having their voices heard, especially in government. Second, women are not only voicing their desire for equality, but demanding it. Modern feminism has allowed for more stories about women to be made. Today, women are the centerpiece, not merely supporting players. It seems that women have made tremendous steps towards equality, from second-class citizens to active members of society. They can vote, own property, go to an Ivy League university, use birth control, serve in the army and on juries, and obtain their own credit cards (yes, that wasn’t always allowed). As a woman living in 2018, one could say that we’re better off than women living in 1918. But is that true across the board?

Wash Westmoreland’s Colette is a biopic that focuses on the formative years of French writer Sidonie-Gabrielle Colette’s life. We watch Colette (Keira Knightley) marry Henry “Willy” Gauthier-Villars (Dominic West) and move from the French countryside to the fast-growing metropolis that is high-society Paris in the 1890s. It is here where Colette begins her career and writes her first novel, Claudine at School, which becomes one of the most popular books in Paris. It’s astonishing, revolutionizing, and becomes a pop culture phenomenon. But the book’s cover states that its author is Willy, not Colette.

Westmoreland focuses on a specific point in the French writer’s life (who later wrote The Vagabond and Gigi, among other novels and novellas) when the main conflict concerns her husband, Willy, taking credit for her first four novels. At first, Willy doesn’t like Colette’s stories. He calls them too feminine and says that no one will want to read a novel about a woman (a sentiment still common today). But on the verge of bankruptcy, he publishes the novel and it makes history. Claudine at School flies off the shelves and becomes the novel of the decade, being particularly popular with young women. As a result, Willy decides to make as much money on Claudine as he can, with and without Colette’s consent. He begins to control Colette, or rather attempts to. When Colette doesn’t want to write, he locks her in a room until she writes a full novel. He also cuts her hair and dresses Colette like Claudine so that she embodies the character herself. He becomes the puppeteer of the Claudine franchise by controlling Colette’s every move and marketing everything from soap to cigarettes in Claudine’s name. But Colette is hard-headed and refuses to be kept on a leash her entire life.

Ultimately, Colette is a story about a woman discovering her voice and then finding a way to claim it. We meet Sidonie-Gabrielle Colette as a confident country girl, and watch as she grows and evolves into the ferocious, strong woman brought to life by Keira Knightley. Knightley, at home in the period genre, is completely at ease in Colette’s shoes. She easily transitions from country-girl Colette to Paris Colette, showing the slow and gradual transformation that occurred in those ten years. She delivers her monologues with passion, range, and sophistication, while still remaining vulnerable. The film is completely Colette’s story and Knightley knows it. She’s aware that all eyes are on her and that it is adamant that the audience loves and roots for her.

Dominic West serves as a strong scene partner for Knightley. He’s as masculine as a 19th-century French businessman can get, and has enough charm to light up a room. But he is also a man of his time. He has frequent affairs, controls Colette, and has no respect for her. He sees her as his property, as if she’s his dog or one of his workers with whom he happens to share a bed. West does the best he can with Willy, but screenwriters Westmoreland and Richard Glatzer provide little room to humanize him. Willy has all the advantages of being a man and uses them, even though Colette is the one with the talent. Yes, he pushes her to write more, even if it’s against her will, and it’s because of Willy that Colette becomes the writer and woman the we remember her as. But unfortunately, he’s a one-dimensional character who only exists as a catalyst for Colette to gain enough strength to leave him. Willy is unlikable, crude, and unsympathetic; a perfect male enemy. Maybe the character was depicted this way because this film is called Colette and not Willy, maybe Willy was just as horrible as he appears to be in the film.

What makes Colette fascinating is that this is a 120-year-old story, yet it is so familiar. Watching this film, one forgets that it actually takes place in the 1890s. It is only when the characters are transporting letters or talking about the invention of the light bulb that one remembers. Colette is a surprisingly modern period piece. It’s a film about one of the greatest French writers of all time, but it’s also about a woman struggling to be heard. For some reason, Colette’s story about fighting to be seen, heard, and given credit for what’s hers is painfully similar to many women’s struggles today. Whether it’s fighting for equal pay or protesting in front of the Senate, normal, everyday women are still at war for their right to be heard and to take what is rightfully theirs. They’re fighting the exact same fight that Colette fought in the 1890s, which makes me think: Have we actually come as far as we think we have?

In general, Colette has a lot going on. It’s a period piece, a queer love story, a coming-of-age film, and a feminist film. It’s a lot. Sometimes, it’s too much, which results in the audience’s loss of attention. But despite its flaws, you can’t look away due to Colette’s painfully familiar yet inspiring story. As an audience member, you can’t help but feel proud of Colette as she claims her voice and makes it on her own. She provides inspiration, reflection, and in some ways, gratitude, because she did it. She broke away from a controlling man, broke free from gender norms, and became successful all on her own. As Colette says, “The hand that holds the pen writes history,” which should strike a chord for any female viewer.