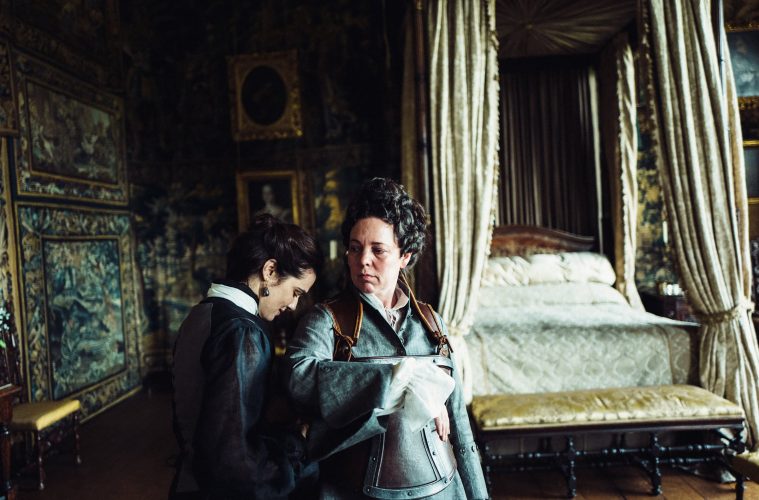 Review: ‘The Favourite’ is a Disgustingly Beautiful Look at Love, Rivalry, and Gout

2018 has been a year full of complex women. From Toni Collette in Hereditary, to Charlize Theron in Tully, to Glenn Close in The Wife, this year has shown that women do, in fact, contain multitudes. This momentum has been building as the year has progressed, and has not let up, as exemplified by Yorgos Lanthimos’s newest film, The Favourite. Generating buzz on the festival circuit for months, the film has been hyped up for its three central performances, gay characters, and overall outlandishness. Well, The Favourite is finally hitting theatres, and I am happy to report that it does not disappoint.

The Favourite takes place in 18th-century England. The country’s at war with France, with Queen Anne (Olivia Colman) supposedly at the helm of the fight. But due to illness and naivety, Anne is surrounded by a gaggle of male advisors and Members of Parliament whispering, or rather shouting, in her ear about the next move. Standing apart from this myriad of men is Sarah (Rachel Weisz), the Queen’s most trusted advisor and friend since birth. She knows which buttons to push and how to get her way when it comes to the Queen; she is unstoppable. That is, until Abigail (Emma Stone), a cousin of Sarah’s, appears asking for work. What unfolds is a rivalry between Sarah and Abigail, a love triangle between both women and the Queen, and a scramble for power.

The centerpiece of this film is the love triangle between Olivia Colman, Rachel Weisz, and Emma Stone, each superb actress bringing a kind of vitriol to the screen that makes you cringe, yet beg for more. Their chemistry is electric, sparking not only lust, but anger, fear, and rivalry. Colman as Queen Anne creates a woman who is both infuriating and sympathetic as she suffers yet another temper tantrum. Weisz is cold, calculating, and alluring. Stone’s iconic doe eyes are used to her utmost advantage, as her look of innocence is a clever ruse for the desperate, yet cunning, plotting that’s churning underneath. Colman’s performance is particularly of note as she wavers between childlike innocence and tyranny. Whether she whines in pain from her gouty leg or screams at someone for merely looking at her, Colman creates a complex character who is pathetic, comedic, and even sympathetic.

As the women dominate the screen, the war, and the negotiations, one cannot forget the exceptionally ridiculous Robert Harley (Nicholas Hoult), whose powdered wigs illustrate an obsession with self-image before all else. Hoult struts on-screen like a meticulously-preened peacock, and has the attitude of one, too. Despite this carefully constructed exterior, he is plotting for power just like everyone else. Hoult delivers his lines with such a powdered punch, weaving creative insults into his everyday vernacular, that it is hard to distinguish between political play and personal attack.

Hoult isn’t the only character who speaks in insults. In fact, this is a film that operates almost entirely in insults, from calling someone “a badger” to perhaps some of the most creative obscenities ever uttered on-screen. The whole script is written around sharp tongues and cutting wit, using words to whittle down opponents bit by bit. Each line of dialogue is uttered with the same deadpan elocution that Lanthimos’s films are known for, which makes each insult and harsh phrase all the more comedic, and sometimes more painful.

Paired with the script is the barrage of outlandish scenarios that Lanthimos is known for. While The Favourite is much more accessible than his previous films, like Dogtooth or The Lobster, it is not without its own grotesque scenes. In this particular film, outrageous and grotesque behavior is used to underscore decadent lives, filled to the brim with wine, sex, and cake. In fact, one of the most beautiful sequences of the film is a duck race that takes place in the palace. Shot in slow motion, Lanthimos alternates between the waddling ducks and close-ups of the crowd, looking both monstrous and comical as their faces slowly contort while they cheer on their favored duck. This brief sequence, occurring so early in the film, clearly portrays the kind of world we are entering: one that provides the illusion of high class, but is really full of drunk buffoons.

From a technical perspective, this film is a triumph, from the use of lighting to the creation of space. Lanthimos uses natural light throughout, letting sunlight flow from the windows, and relying on candlelight during nighttime scenes to cast shadows and hide faces. This use of light lets characters hide, sneak around corners, and literally illuminate the hidden. Paired with natural lighting is the utilization of deep space within large, intricate rooms. Lanthimos creates such a carefully constructed atmosphere with these spaces, the lighting, and the costumes, that you can’t help but feel absorbed into this ridiculous, lavish world.

The best thing about The Favourite is that there is no one villain or hero. Everyone in this film is a varying shade of unlikeable, sneaky, and conniving. All three women are complex figures with their own motivations and desires, which they hide with snide comments and backstabbing. Who can fault Stone’s character for merely wanting a better position in life? Who can fault Queen Anne for wanting the war to end? Who can fault Weisz’s character for reveling in her position of power and doing anything to keep a hold of it? What all of these women want is agency, and while they achieve it in increasingly bizarre and questionable ways, you cannot deny their cleverness and determination in the name of independence.

With The Favourite, Lanthimos creates a devious, enchanting, and hilarious story that circles around three complex women, their desires, and their desperation for something, whether that be love or power. It is a peek at the ugly world of the elite, its decadence and its monstrosity. It is a film that will make you laugh, gasp, and laugh some more in a way that only Yorgos Lanthimos can.