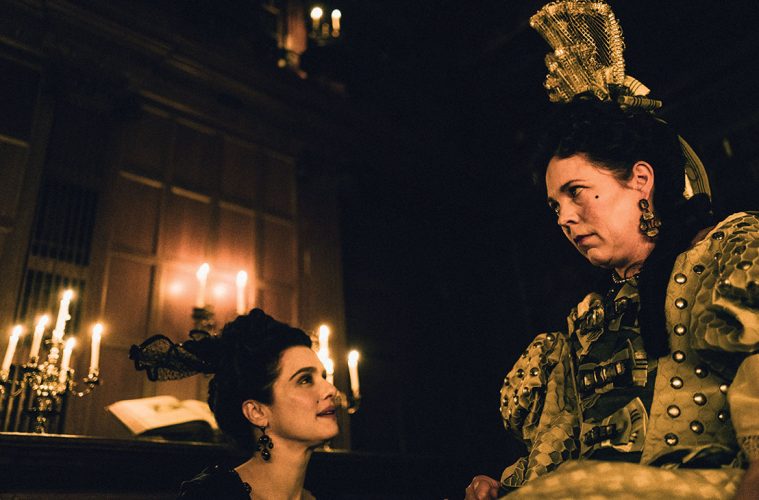 The Timid Treatment of Lesbian Desire in ‘The Favourite’

Among the abundance of lesbian films that were released in 2018, The Favourite, from eccentric director Yorgos Lanthimos, was easily the most drooled-over. His seventh feature—a tale of Queen Anne’s court and the two ladies-in-waiting who seek her approval—was lauded as a triumphant masterwork of lesbianism almost immediately after it premiered. As a lesbian who craves exactly that, I was ecstatic about its fervent acclaim, eager to rejoice in it alongside my community. When the time came, I walked into the theater expecting grandiose displays of sapphic desire and uninhibited love scenes I’d never forget, but the gayness that was excessively raved about only ended up letting me down.

Before the fight for Queen Anne’s affections ensues, Abigail unexpectedly finds Anne and her companion, Lady Sarah, making out in the palace’s library. Both unaware that a jaw-dropped Abigail is watching, Anne commands Sarah to fuck her, to which she quickly accepts, whisking the Queen away to her bed chambers without hesitation. Abigail’s reaction is what the camera focuses on, while all that’s left of Anne and Sarah are muffled noises. After getting in good graces with the Queen, Abigail gets the chance to pleasure her, choosing to finger her while they’re both fully-clothed. As far as sex scenes go, that’s all we get. Even with a tone that combines kink with bawdiness—not to mention a narrative that revolves around sex as a form of politics and power—The Favourite’s lack of explicit lesbian lovemaking feels criminal.

Oddly enough, the outspoken nature of the film’s leading women isn’t enough to warrant a glimpse at consummation. This is a major detriment to Queen Anne, whose life is consumed with loss, illness, and loneliness. Expanding on her unrelenting libido could’ve given her moments of liberation and bliss that she deserves. Nevertheless, declarations of desire in The Favourite’s world are unfortunately reduced to words, and there’s no action to complement them. By omitting explicit lesbian sex scenes, The Favourite delivers a message that its women are allowed to lust after each other, but only from a distance—behind closed doors, heard but never seen. If the film chose to center a straight love triangle instead of a lesbian one, the opposite would surely occur. Not only does this communicate to queer women that their desires aren’t deserving of unabashed expression on the big screen, but due to The Favourite’s presence at mainstream theaters, it also plays directly into the hands of heterosexual audiences. This coyness gives them an “acceptable” depiction of lesbianism that can be easily identified, but not enough to leave them completely repulsed—or willing to rebuff the film entirely.

After the 2017 release of the much-adored summer romance, Call Me By Your Name, criticism was abound for the timid treatment of its male leads’ sexual encounters. Before Elio and Oliver can take all of their clothes off, the camera ends up wandering away from their bodies, choosing to focus on the moonlit view outside of a window instead. Where is the criticism for this aspect of The Favourite, which, in its own way, does the exact same? Maybe the Queen declaring that she likes when Abigail puts her tongue inside her is too distracting, but even with a line as blunt as that, desire, according to The Favourite, is limiting.

LGBTQ+ audiences—women who love women, especially—are all too familiar with implication replacing intimacy. It’s an expected norm for us in media, which is devastating. Our craving for representation needs to go beyond the bare minimum and become a demand for more thorough, fearless, and radical journeys.

Some would argue that The Favourite isn’t a lesbian or queer film to begin with because such labels didn’t exist in the 18th century, and therefore, any judgement towards its representation isn’t justified. However, it continues to be treated like a queer film, garnering more applause for its homoerotic moments than the rest of 2018’s many LGBTQ+ films.

As lesbianism was irrelevant to Lanthimos while crafting his film, this leaves room for a restrained and misguided exploration of eroticism. On depicting same-sex relationships in The Favourite, he explained to IndieWire, “My instinct from the beginning was that I didn’t want this to become an issue in the film, for us, like we’re trying to make a point out of it. I didn’t even want the characters in the film to be making an issue of it. I just wanted to deal with these three women as human beings. It didn’t matter that there were relationships of the same gender. I stopped thinking about that very early on in the process.” But what his gaze fails to realize is that same-sex relationships don’t need to be an “issue” or central conflict in order to be fully explored.

The Favourite’s dearth of lesbian activity has been mostly unacknowledged. This could be attributed to the fact that women’s sexuality is neglected and underappreciated in cinema, especially if it’s not used for mere titillation. Though mostly taking place at a gay conversion therapy camp, The Miseducation of Cameron Post doesn’t shy away from expressing steamy lesbian desire openly and authentically. The drama, however—a Grand Jury Prize winner at Sundance—barely received attention or awards recognition, even in LGBTQ+ circles. Its director, Desiree Akhavan, told Dazed, “There’s a lot of fear around women’s experience of sex, especially positive ones. Female desire is something that’s frowned upon in a lot of avenues of life, not just within the film industry. The film industry is reflective of a larger problem.”

Besides Cameron Post, there are other notable examples throughout cinema where women’s sexuality (especially lesbian sexuality) has been done justice. Rachel Weisz’s other sapphic film of 2018, Disobedience, makes desire its core element, treating it with both elegance and respect for its entirety. A forbidden romance set in an Orthodox Jewish community, its sex scene is without nudity—like The Favourite’s carnal encounters—but manages to communicate eroticism with a divine, liberating energy. Director Sebastián Lelio describes this moment as “the heart of the film, the deepest layer,” as it gives Rachel McAdams’s Esti the chance to experience freedom for the first time in her life. While considering Lanthimos’s latest feature, another lavish period drama with cunning women that comes to mind is Park Chan-wook’s The Handmaiden. Debate will never cease on whether the 2016 thriller’s explicit lesbian sex is empowering or merely pornographic, but its women are not only in control of their mutual desire, but willingly crave it. Because of Sook-hee and Lady Hideko’s circumstances, engaging in sex with each other can be interpreted as a means of attaining love, fulfillment, and escape from the oppression of their former lives. The Favourite deserved to represent desire with that level of depth and openness, but the lack of it leaves the film with a lingering emptiness.

Even though The Favourite focuses on sex as political power instead of genuine affection, that doesn’t mean the film’s approach to it isn’t worth evaluating. But films that center queer women need to eliminate reticence about eroticism, or else all they are—to borrow a line from Abigail—is capable of much unpleasantness.