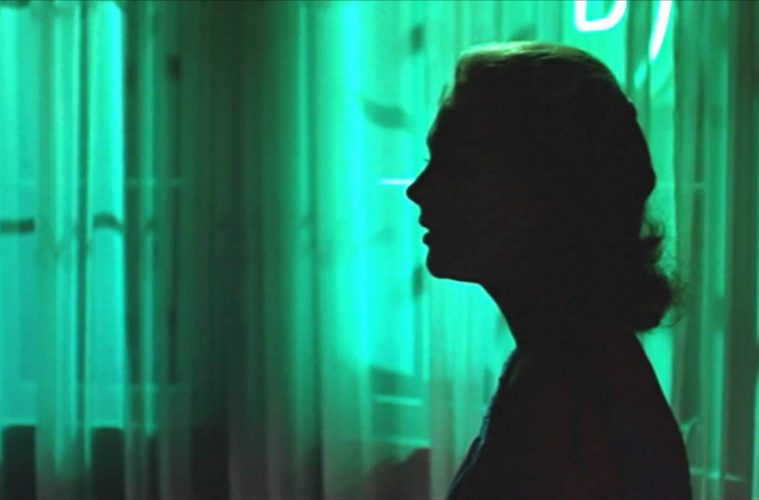 Alfred Hitchcock May Have Been Hollywood’s Freud

In a career spanning six decades, Alfred Hitchcock became one of the most revered Hollywood directors of all time. Having transitioned almost effortlessly from the silent era to that of the “talkies”, Hitchcock juggled everything from extravagant costume dramas to heartfelt romantic comedies, and his ability to write and direct has impacted generations of subsequent filmmakers.

He is perhaps most famous for his terrifying suspense films, which gave audiences a glimpse into some of their worst nightmares. Any avid Hitchcock fan (like myself) is keenly aware of his style, as well as his practice of thrusting characters into dark and psychologically-twisted whirlpools of events, forcing them to face some of their most tantalizing fears.

I remember when I saw my first Hitchcock flick: The Birds (1963). As a baby, I apparently liked to sit in my diaper on the balcony of my parents’ first house and try to communicate with the crows that would perch on the nearby trees. My mother loves telling this story to everyone we meet. (And apparently, so do I.)

Despite making his films in very controlled environments, with severe pressure from studio executives to deliver one hit picture after another, Hitchcock’s films were often based on one’s loss of control. Quite often, in films like Vertigo, North by Northwest, and Rear Window, protagonists are tossed into a vortex of guilt and intrigue, battling the unknown and making decisions out of fear and uncertainty. In classic Hollywood style, much of Hitchcock’s success can be attributed to a very simple formula: cast an industry giant (i.e. Grace Kelly, Cary Grant, James Stewart) to give a face to these fears and add some much-needed glamour to these thrill rides. Hitchcock knew not just how to manipulate his actors, but his audiences as well.

You never leave a Hitchcock film feeling completely satisfied with the ending. You are left wondering about the lives of the characters after the screen goes black. There is also a sense of amazement and panic because you just watched your fear come to life on screen. No one wants to be chased across the country by a crime organization after being mistaken for a spy, and no one wants to suffer from acrophobia or be stuck in a room with a broken leg for several weeks while you discover that your neighbour is a murderer.

Any film lover understands the importance of symbols. We look for symbols in everything – in films, conversations, books, television shows, and life in general. It should therefore come as no shock to any one of us that Hitchcock also was into symbolism. His most popular choices seem to be the eyes, the hands, and an individual’s phobias. 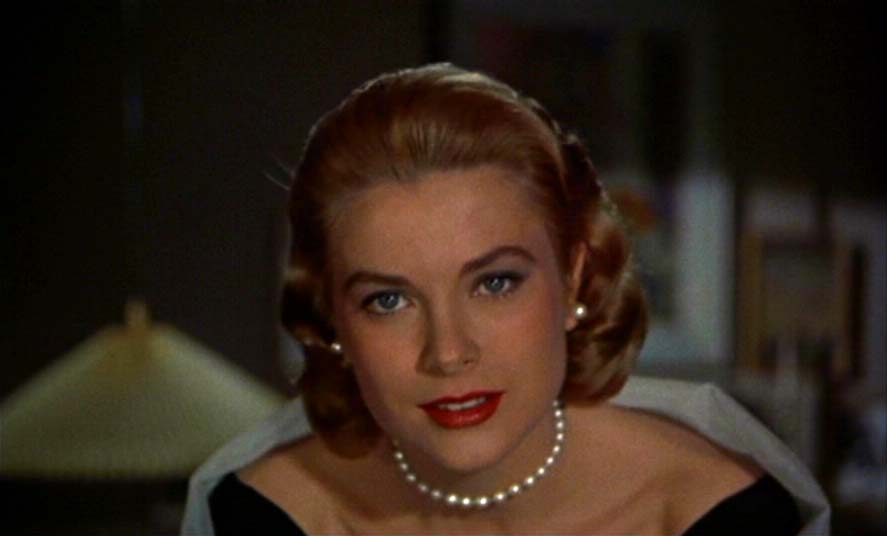 But what do a person’s eyes or hands have anything to do with the plot of a film? What does it mean when a camera zooms in towards a character’s eyes, or focuses a little too intently on the way a character’s hands react to their surroundings? How does a character’s phobia change the way they behave in the scope of a film? Does the audience share their phobia? Are Hitchcock’s characters relatable?

Your eyes are thought to be the windows to your soul. For Hitchcock, they’re for the audience to peek into when a character is in their most raw and vulnerable state. He loved telling a character’s story with their eyes because he felt that they told more of a story than the plot itself. In Vertigo, Rear Window, and North by Northwest, Hitchcock’s close-ups on his characters’ eyes make a huge impact on how we perceive their decisions.

The look of horror on Scottie Ferguson’s face, the deceit in Eve Kendall’s eyes, and the fear in Lisa Fremont’s eyes, all create anticipation. How is Scottie going to react to his nightmare? Is Lisa going to help Jeff solve the mystery? Is Roger going to find out about Eve’s true motive?

You see the characters in these situations, and the focus on their body language encourages you, as the audience member, to react in a specific way. Hitchcock was able to elicit specific responses from the audience through his direction, in order to enhance the cinematic experience. Film professor Georges Toles says, “The spectator, having chosen a secure, hidden position in the theater, is spatially removed from the experience he or she observes, which frequently encourages the illusion that one is free to participate or remain disengaged”. 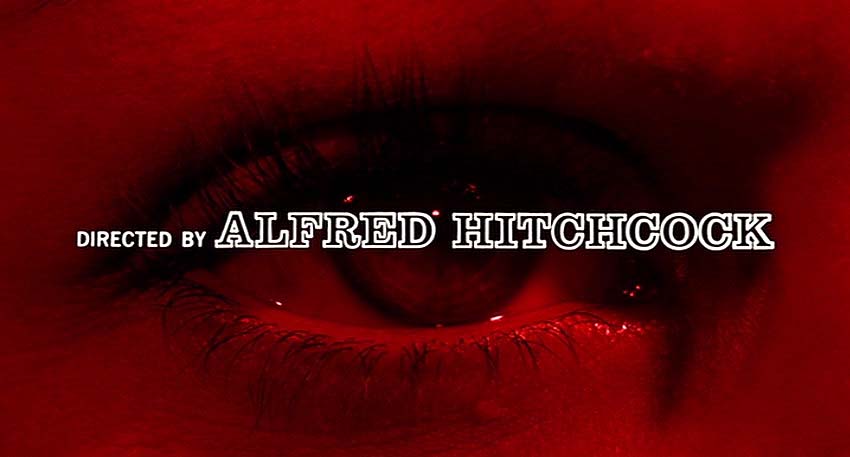 By focusing on the eyes of his characters through a variety of close-up and medium shots, Hitchcock gives his audiences two choices: to feel the character’s emotions (i.e. fear, shock, anxiety) and live the movie through them, or choose to separate yourself entirely and enjoy the experience of watching their life spin out of control.

Vertigo begins with a close-up of Kim Novak’s eyes, and the audience already senses that fear resides behind those eyes; a frightened helplessness at the situation soon to be apparent to us. As the camera narrows its gaze and begins to focus on a single eye, the audience is introduced to new emotions. The left eye screams with fear, while the right eye – filled with an endless purple vortex – signifies the loss of control and a downward spiral.

You see a film with your eyes, hoping to take in as much as you can in a dark theatre. It takes a while for your own eyes to adjust to the darkness, during which time, Hitchcock has already immersed you into the lives of his characters. As a director, Hitchcock was a compulsive voyeur and liked to involve his audiences in his obsessions. Each of these films deals with an obsession. Scottie’s obsession with Madeleine and Jeff’s obsession with his neighbours’ lives make us external voyeurs. We are looking at Scottie and Jeff as they look into another person’s life. We cannot help but look into it because it only takes a few moments for Hitchcock to reel us in. Our eyes dart from character to character, pupils dilating, reacting and responding to what we see on screen. Do we ever truly walk into a Hitchcock film prepared? Can we ever know what to expect before the screen goes black?

“Give them pleasure – the same pleasure they have when they wake up from a nightmare.” – Alfred Hitchcock

Critic Alan Vanneman has written in detail about Hitchcock’s childhood. Having being raised in a devout Catholic household and attending a Jesuit school as a boy – where a blow to the hand with a sharp object was a regular punishment – Hitchcock understood that our hands are a symbol of human vulnerability. In his films, we see characters extending their hands to receive assistance, but never getting any help. He wants his characters to be surprised, but for his audience to get anxious waiting for things to take his characters by surprise.

You can either raise your hands up, like Roger Thornhill to stop an oncoming truck in the crop duster scene in North by Northwest, or you can use them to induce harm, like Thorwald in Rear Window. In the final scene of North by Northwest, the camera zooms in on Roger and Eve clinging to Mount Rushmore, desperately trying not to slide down the noses of some of America’s greatest presidents. Thornhill looks to Leonard and begs for help, but he uses his foot to crush Roger’s hands into the stone. Hitchcock’s close-up on the hands creates a sense of despair in the audience as they struggle with the reality that Roger and Eve might die together. A quiet suspense fills the air in the theatre as we begin wondering what is going on while Hitchcock’s camera focuses on Thornhill’s hand. Is anyone watching this confrontation? Are there other characters in the distance waiting to watch them die?

When Alfred Hitchcock was a boy, his father had him locked in a jail cell by a policeman (who was a family friend) after he came home too late at night. The experience scared him, as it would any child, because humans hate being alone. We crave socialization and human contact, and our biggest fear is of dying alone, or being locked up somewhere alone. In my first-year psychology class, I learned that Freud thought fears introduced in one’s childhood stayed with you into adulthood. We associate fears with memories, often memories of how you came to be afraid of something in the first place. We’re often unable to explain why we are afraid of something and, even with all the knowledge and understanding in the world, can probably never put the fear to rest. Being afraid of something is paralyzing, which is key to Hitchcock’s arsenal of directorial tricks.

We know what Scottie in Vertigo is afraid of. Every time he has to scale a height or a tall building, I feel myself inching closer to the edge of my seat. Hitchcock uses Scottie’s acrophobia to trick us. We’re never sure if his acrophobia impedes his judgment and decision-making. Through a chain of events, you realize that part of the plot of Vertigo has the bad guys relying on his acrophobia to have their plan succeed. 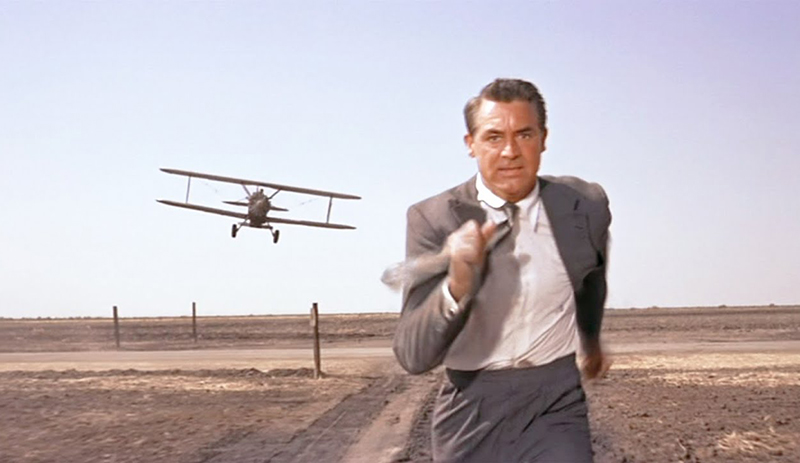 Think back to the crop duster scene in North by Northwest. (I write this as I listen to the insanely brilliant score composed by Bernard Hermann.) Hitchcock uses a phobia of open spaces (or agoraphobia) in the scene to elicit a sense of anxiety in the audience and in Roger. Each angle brings a new thrill to the sequence. When Roger ducks to avoid being whacked in the head by the plane, so does the audience.

As the camera darts from angle to angle, so does our gaze. Each of the sixty-one angles in the scene elicits a different response from us – fear, exhilaration, excitement, anxiety. Every response is more powerful than its predecessor, forcing us to face our own fears from the comfort of our seats. It’s anyone’s worst nightmare, being chased by a plane, and before we are able to absorb or understand how it will end, Hitchcock zaps us back into reality. Thornhill has escaped a dangerous situation once again. Normalcy resumes.

I am not sure if you can tell, but I’m a fan of Hitchcock and always have been. His ability to use inconspicuous body parts (i.e. hands, eyes) to scare us in our seats is unparalleled. Hitchcock loved toying with his audiences and experimenting with different illusions.

Considering that his target audiences were middle to lower-middle class families in the 1950s and 1960s, you have to give him credit for being bold enough to use all sorts of mind games in his films. He is able to use very basic things, like a fear of heights, to create a film that scares and amazes us to this day. I get why Hitchcock is called the “Master of Suspense”. Things that are normally unknown to us – fears, ideas, and insecurities that we push into the back of our minds – are used to enhance our cinematic experience. Films are just constructions – constructions of situations that will probably never exist in real life. Hitchcock proves that films are just for entertainment, and not for solving the crises of the human condition.