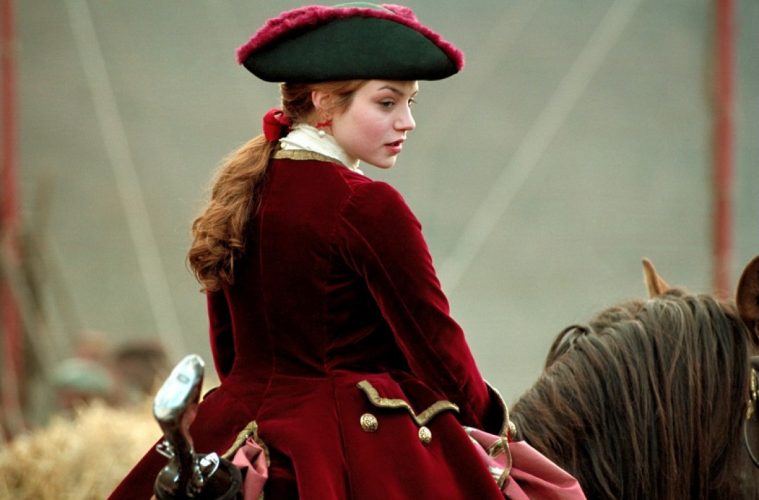 Beauty is the Beast in ‘Brotherhood of the Wolf’

The 2001 French film Brotherhood of the Wolf is a fantastic, genre-bending examination of the true story of a mysterious beast terrorizing an 18th-century French province. For the first half of the film, we’re left to speculate along with the characters as to who or what is responsible for a series of gruesome murders, primarily of young peasant women. The film’s style owes much to Hong Kong action cinema, with breathtaking slow-motion kung fu fight sequences, frequently in the rain, sometimes with birds flying past for emphasis. Early on, peasant girl La Bavarde (Virginie Darmon) is accused of witchcraft, hinting that there may be a supernatural basis for the mysterious, vicious beast. After all, if this film suggests a time and place where witchcraft is real, it’s a short logic leap to the existence of werewolves or worse. And the more time we spend with the film’s main female character, society lady Marianne (Émilie Dequenne), the more she begins to seem a likely suspect as the werewolf’s human alter ego.

Both the beast and Marianne are hunted by men in this film. When our hero, Grégoire de Fronsac (Samuel Le Bihan) first spies her, he refers to her as quarry, and her suitors as hunters. He is equally drawn to investigate the beast’s brutal crime scenes as he is to understand Marianne’s mercurial personality. She is bold enough to join the men on a hunt for the beast, yet cows to her brother Jean-Francois (Vincent Cassel) and father. She is the town’s most eligible bachelorette, yet no man has been able to win her heart – or, more importantly, her father and brother’s permission to wed her. She seems to be in control of her emotions and destiny, but that’s just a smokescreen; in reality, she cannot wed because she’s bound to care for her infirm brother. When Fronsac talks with her about his plans to travel the world and inquires after her dreams, she replies pragmatically that “A lady has more duties than yearnings”. She knows her life is so preordained that even dreaming of a different path is only to invite despair. But just because she’s been raised to believe that women should keep sweet doesn’t mean she’s immune to human emotions. Without any means to vent her rage – without even the vocabulary to express that she’s feeling it – it seems to follow logically that Marianne could herself be the beast. How could a creature of pure rage be anything other than female?

And yet, about halfway through the film, we learn this is not the case. Marianne comes face-to-face with the creature, who we now see is covered in spiked metal armour and prowls like a big cat. The other women it has confronted thus far have all wound up gruesomely mauled, yet when it faces off against Marianne, the beast demurs. Later, it is inferred that the beast smelled her brother’s scent on her and backed off, as Jean-Francois is (spoiler) one of its masters, but that’s only the supposition of a man incapable of seeing his sister as anything more than an extension of himself. The sequence when Marianne and the beast consider each other is one of the film’s most fascinating; her terror and the beast’s rage both changing to confusion in the same moment, the two characters sharing something unspoken before the beast leaves. Marianne and the beast may not share a body, but their spirits are connected on some level.

Perhaps they see in one another a shared sense of captivity. Marianne’s prison is the same gilded cage of so many women of her era (and ours), while the beast’s captivity, in a wooden dungeon, is less pretty. The end result is the same for both of them as they are only permitted out when their keepers decide, punished for acting out of line, seen not as individuals but merely as prizes and weapons. The other young woman of this town, La Bavarne, falls on this same spectrum. She has a wild, free-range sexuality that entices and enrages the men around her. In most of her scenes, she moves back and forth between prey and predator. There is a sequence where, in a matter of moments, she flirts with Fronsac’s companion Mani (Mark Dacascos), is accosted by two other men, aggressively kisses those same men, and then leads them off for an apparent threesome. In another sequence, she dances with abandon for a group of men who throw knives at her. Her presence in this film is always right on the razor’s edge between sex and danger, femme fatale and victim. Where Marianne must bisect her personality, presenting herself as pleasant while hiding any feelings of anger or sadness, La Bavarne is all id, living fast and clearly on a path to die young. She begins the film defending her father; later, her father effectively disowns her for her role in instigating a sort-of fight club. She acts out, seemingly uncontrollably, but is still seen by the town as an extension of her father, not as her own person.

Which is where we find the film’s third major female character, Sylvia – a force of nature played by the incomparable Monica Bellucci. She is set apart from everyone else in town – even among the women she works with at the local brothel, she is seen as something a step above. She is wildly intelligent, straightforwardly sexual, and seems to be operating at all times on some other level of humanity; her wry smiles suggesting a cat playing with a mouse, biding her time until she can strike. And sure enough, we come to learn that she is actually a Vatican spy/assassin, sent to oversee Fronsac’s investigation and to ensure that the conspiracy behind the beast does not threaten the Papacy. She, like the beast, is a weapon wielded by a group of men – but unlike the beast, she seems to have chosen this life, more mercenary than soldier. Another of the film’s most striking moments is during the climax when Sylvia faces down against La Bavarne. The peasant girl threatens the outsider with a crude dagger; Sylvia casually expands a ladylike lace fan with vicious stiletto blades at each join. She takes down La Bavarde with an effortless twist of the hand; weaponized femininity in its most obvious sense.

Marianne, however, is undone in a manner similar to that of Sansa Stark on Game of Thrones; she has played by the rules of society, and still wound up its victim. She learns in the worst possible way that her brother, Jean-Francois, more or less created the beast conspiracy due to his obsessive lust for her. When he assaults her, she defends herself with a knife and he gaslights her, daring her to kill him, threatening to kill himself, and ultimately raping her. She is left nearly catatonic with shock and grief; her pretty prison now indistinguishable from the dungeon in which the beast is kept. She may have felt powerless at times, but with her brother’s shocking actions, the full extent to which she’s been imprisoned nearly destroys her. She is a brutalized Snow White or Sleeping Beauty when Fronsac rushes to her side. Marianne’s state again mirrors that of the beast, who moments ago we’d seen in a similar state, only able to find freedom in death. But perhaps due to the sacrifice of this creature, to whom she’s been connected without realizing for so long, Marianne wills herself back to life.

The beast was brought to France from Africa on a similar ship to the one we see in the film’s ending sequence. She was stolen from her home, kept in captivity, and brutalized; only able to express rage when her owners permitted it. Marianne, the woman so controlled she wouldn’t even allow herself to yearn, emerges in this final sequence in a blue dress similar to Alice in Wonderland – prepared to enter a new realm of existence. Her hair is loose and her affect is unencumbered, happier than we’ve seen her before. Perhaps the beast had to be sacrificed so that Marianne could be freed; perhaps now she can inhabit all the parts of herself, rage and joy and sadness and anger braided together.